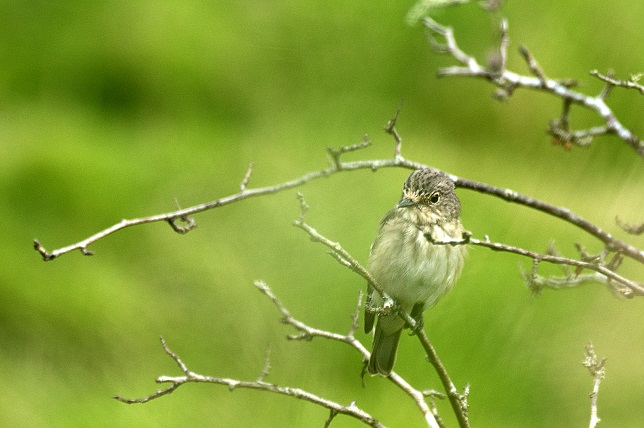 is lost to many.

More about the spotted flycatcher…

Small, ‘gray’, fleck-breasted, weighing nineteen grams, life span of two years, feeder on flying insects, nester in churchyards, cemeteries, mature gardens, woodlands and parks, migrator to and from Africa, this modest bird has declined in the UK by 89% over the last forty years. Names include ‘Egypt Bird’ for the ‘eejip’ sound of its call and ‘Beam Bird’ for its perching position. Poets and writers (John Clare, Walter de la Mare, the Bishop of Killaloe, James Aitchinson, Mrs Gaskell amongst others) describe the enchanting looping, swooping flight of the spotted flycatcher which darts out every twenty seconds or so to catch its prey. Sadly, spotted flycatchers are now on the red list of endangered species, so whether it will be around to write about in the future is debatable.

It appears that ornithologists are not agreed on the reasons for decline. Is it nest predation by jays or squirrels? The lack of insect food in the UK, at migratory stopping-off points in Spain, Portugal or destination sites in Africa? Does weather when migrating play a part? Is it traditional nesting places disappearing in the UK as they become sites for homes, shopping centres, car parks? Are cemeteries too ‘manicured’ to allow insects to thrive? Have gardens, replaced by concrete, paved the birds’ paradises and contributed to the decline?

Why do so many juveniles die in their first year, which leads to fewer adults for breeding? Does the decrease of biodiversity in the countryside, and the use of pesticides contribute? Why do they survive in fairly large numbers in North Wales, but are almost absent from the Scottish Islands, the North West and the Yorkshire Dales? All are being investigated.

My research has been both surprising and sombre, teaching me much about bird behaviour, migration and the inexact knowledge we (including scientists) still have of songbirds’ feats of flight and survival.

What simple things can we do to support the spotted flycatcher?

Plant hyssop, buddleia, Michaelmas daisies, ivy to attract the insects they feed on – butterflies, crane-flies, damselflies, wasps, bees, moths. Leave wild and overgrown areas in your garden and in traditional nesting areas; have patches of dandelions and marjoram so attractive to insects; plant a tree.

Look out for them on your walks. Listen for that ‘eejip’ ‘tseep’ sound. Take photos.

Let the The Wildlife Trusts know where you’ve seen or heard them. Send them your pictures.