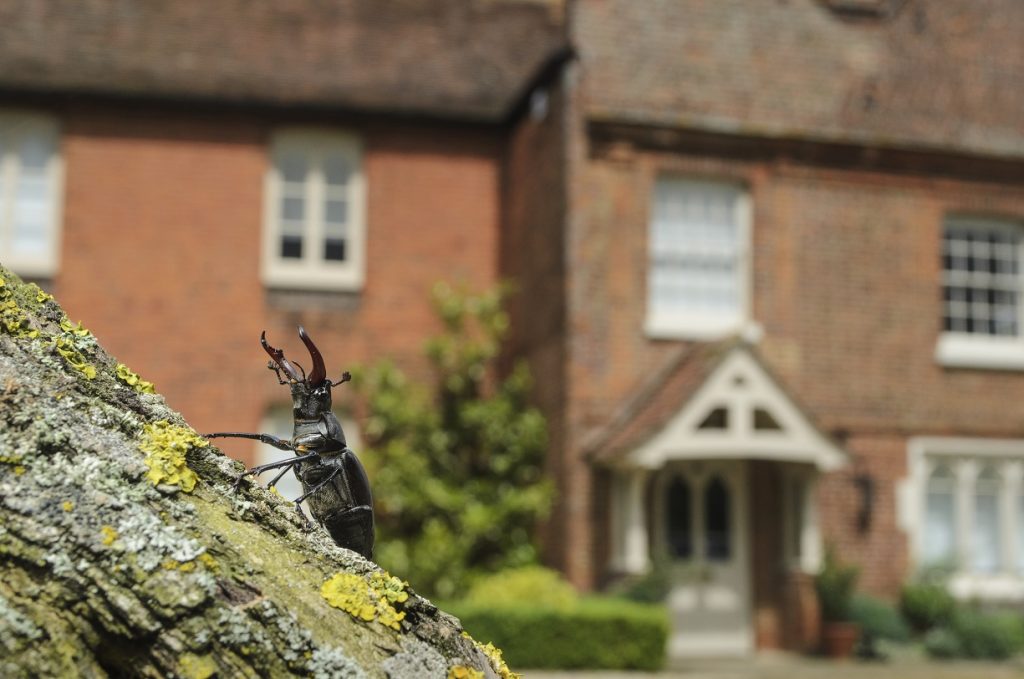 When I fly,
You’ll know it’s late
As the sun starts to fade,
And life starts to slow.
Days left on earth after years spent below.

Time to go.
No rest for the wicked
As they say.

Coals that glow,
Cast into dusk.
The flare before the flicker.

Billywitch
Fiction, more fierce than the fact
Hornbug
Bark’s worse than the bite
The fear was forged in the name;
The truth burns much less bright.

More about the stag beetle…

The UK’s largest beetle is still something of an enigma – understandable given they spend the vast majority of their relatively long lives underground. But we do know that they go through several major and remarkable transformations. They spend up to six years as a larvae, buried in the soil. During this time they feed on rotting wood and shed their skin five times, before building a cocoon in which to pupate. When they finally reach their adult beetle state, they wait out the winter underground before finally tunnelling up to the surface. But by the time they emerge – in May or June – they only have a few weeks left to live. By the end of August, most of them will have died.

You’re most likely to catch a glimpse of them on a warm summer’s evening, as the males spend the days soaking up the sun before taking to the skies in search of a mate. But these sightings are becoming more and more infrequent. Once widespread, stag beetle numbers are dwindling across Europe. In Britain, they’re now most prevalent in southern England, but are extremely rare or even extinct in other parts of the country.

Their biggest threat is a loss of habitat. Since the larvae’s food source is decaying wood, the tidying of woodlands and the development of open spaces in general is largely responsible for their decline. Their appearance – particularly the males’ huge ‘antlers’ –  also leads some humans to kill them, mistaking them as dangerous. But their fearsome reputation is unfounded. These oversized mandibles serve only to attract mates and wrestle competitors. They’re not designed to bite – in fact some scientists believe the mandibles prevent them from eating at all.

However, that hasn’t protected stag beetles from copping the blame for all sorts over the centuries. They crop up in many mythical tales, mostly as a symbol of evil and misfortune.

In European folklore, they were said to summon thunder and lightning, having become associated with the humid summer nights on which they’re most often seen. Medieval Britons believed they ruined the corn harvest, so labelled them ‘Devil’s Imps’ and took to stoning them. They were particularly (un)popular in Germany, where they have a dozen colourful names, including Donnerpuppe (thunder puppet), Feurerschroter (fire spreader) and Hausbrenner (house burner). Names like these reflected the common belief that stag beetles did Thor’s bidding, as well as a superstition that they were responsible for house fires – legend has it they carried hot coals in their jaws and set thatched buildings alight.