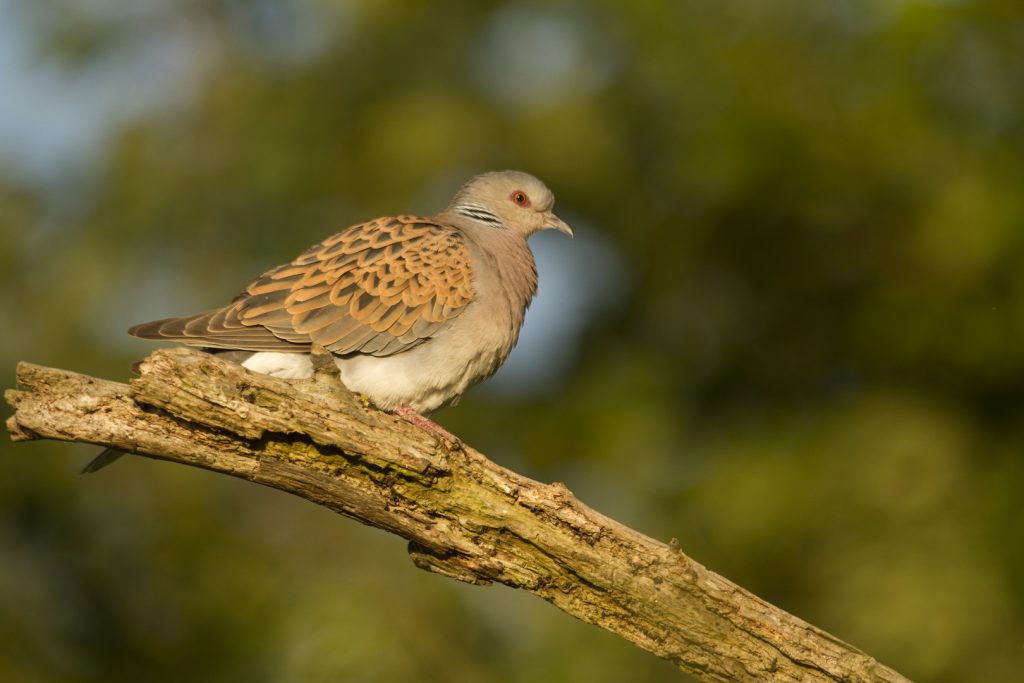 Singing its name, called by Spring
[   ] starts from winter grounds
shaking dusty winds from its wings
compass set away to last Autumn.

Then land. Once more back home.
Home. Rich wilding hedges
flower spotted field edges,
or a peck through habitat destroyed,

no seed, bare nest, and one less song.
Fragile remnants of a storied past
echo through the winds of two continents
empty places, no longer singing its name.

More about the turtle dove…

Turtle doves are the fastest declining bird species in the UK, with numbers falling by 95% between 1995 and 2018 (UK Breeding Bird Survey 2019). Unsurprisingly it is currently on the Red List for Birds, reflecting its rarity and the downward trend in population and distribution. There is a real fear it will become extinct without sustained conservation effort.

The ‘turtle’ name is often a source of confusion, not linked to the eponymous reptile, rather to their notable ‘turr-turr’ call. This was once a common feature of the spring soundscape but is now largely replaced by the call of the more common collared dove and woodpigeon.

As I read about the dove, I became fascinated by its migratory story. Long known that it winters in west Africa, the details of its journey have only recently been mapped, using birds fitted with miniature tracking devices. The first successful study under the RSPB’s Operation Turtle Dove followed a bird called Titan in 2014. Leaving Suffolk in Autumn, the dove flew a round trip of some 11,000km – over France, Spain, the Mediterranean Sea, Morocco, navigating the Atlas Mountains and the Sahara, and through Senegal to Mali.

Despite the rigours and risks of that journey, it seems the main reason for decline is habitat destruction. Typically liking to nest in tall and broad hedges, and relying on a diet of seeds, the turtle dove also needs a reliable water source to make the crop milk on which they feed their young. This is a rather particular list of requirements, and many of its traditional breeding grounds in Southern and Eastern England have been lost in recent years. Faithfulness to traditional nesting areas exacerbates the challenge; a second tracked dove returned after a seven-month absence to within two miles of its location the previous Autumn.

Fortunately, conservation efforts by The Wildlife Trusts provide hope. Suffolk Wildlife Trust’s Black Bourn Valley Wilding project has, for example, allowed nature to reclaim formerly arable farmland creating a thick, shady and (for predators) impenetrable scrub. Seeds from plants such as black medic, scarlet pimpernel and fumitory provide the specialist feeding habitat needed; and ready access to freshwater ponds allows the returning doves to recover and thrive after their journey from the other side of the Sahara. More broadly, The Wildlife Trusts are working to highlight awareness of the turtle dove’s plight, and to encourage landowners and farmers to create turtle-dove-friendly environments beyond their own nature reserves.