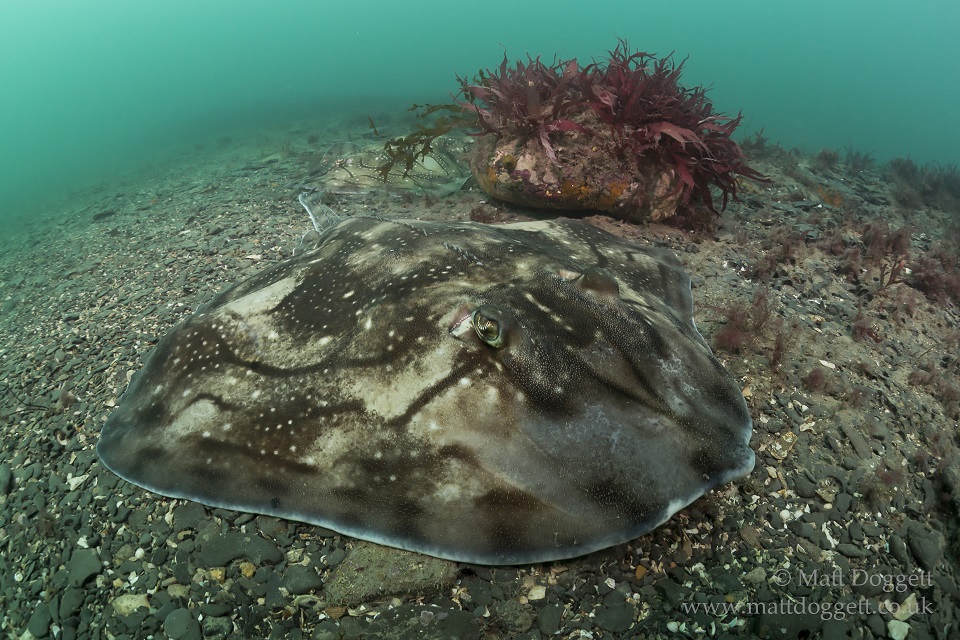 To witness them
you might need
to dive a lifetime
glimpsing one,
maybe two,
of these pancake-thin beauties
skating the ocean floor,
dipping and furling
like a chiffon hem,
pencilled with
undulating lines and flecks
as unique as any human face
until seized
in the bycatch of commercial fisheries
and almost erased.

Yet individuals are traced
to the same site
on the same day
years apart,
guided by an internal GPS
whose wavelength we do not understand.
When recognised
exhilaration surges,
the instinct to protect
arises,
the knowledge that we can
is known,
should we choose to witness them.

More about the undulate ray…

“Happy for you to give me a call. Early evening is best,” Sheilah emails back, “not 7:00-7:15 – NOTHING takes precedence over The Archers.” I suggest 6pm, underlining it twice in my diary; something tells me I mustn’t be late.

Sheilah and Martin Openshaw run the Undulate Ray Project, tracking rays off the Dorset coast between Portland and St Albans Head (could this retired couple have a more perfect name for this work?). Although an endangered species from Morocco to the north Atlantic, undulate rays are locally abundant here, probably thanks to the success of fishing regulations.

But so little is known about undulates and understanding more about their behaviour and habitat is at the heart of the project: “We want to know how large the rays’ home territory is, where they lay their eggs and where the young develop before people see them as relatively large juveniles. We can feed this information back to the Wildlife Trusts which helps them plan for the rays’ future.”

On a visit to the Galapagos, Sheilah and Martin had taken photos of parts of whale sharks – “we didn’t have the right kit to photograph the whole animal,” Sheilah laughs. They spotted an international call for photos of whale sharks by scientists tracking the sharks’ movements by matching photos of their markings; they sent their pictures in. They never heard anything back but the idea made an impression: they wondered if they could do the same with undulates.

To date, they’ve taken or received 1,100 ray identification photographs: 121 people – divers and anglers – have contributed photos and they’ve matched 133 rays.  When a ray is spotted on more than one day they give him/her a name.  They’re on their sixth cycle through the alphabet (the names of Thunderbirds characters feature prominently). Al was the first ray to be named in 2012; he’s been seen four times, each time very close to where he was first spotted. Their most seen ray is Mr. Grayce, spotted eight times in four years.

By now I’ve scribbled three pages of notes. I find this project extraordinary; I am amazed by this couple who dedicate so much time, passion and energy to this beautiful creature.

“Have you seen our Black Bream Project?” Sheilah asks.

“I’ll take a look at the website,” I promise and release Sheilah to The Archers.