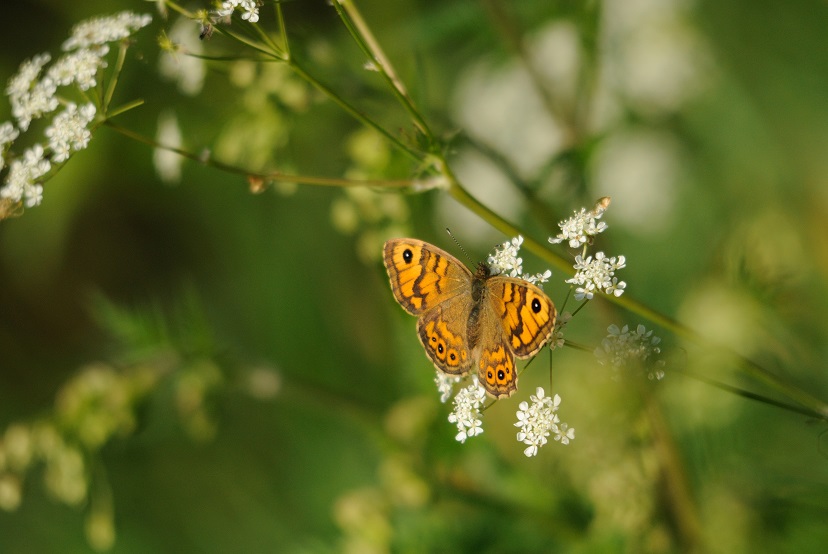 Gently uncapped by a caterpillar

who feeds to a chrysalis and

unravels to reveal an Edwardian lady.

She smooths her amber petticoats

finds restoration on the balmy sand

then lays the egg which

But drawn early to wake

by the embers of an Indian summer

hemmed by spears of hollow straw

slows to a crawl

More about the wall brown butterfly…

Wall brown butterflies are commonly found in rocky, sandy spots: basking on boulders in abandoned quarries, or skimming the edges of stony beaches on warm, sunny days. It didn’t seem likely that I would spot one from the window of my sombre, north-facing Oxford flat. I’d have to go outside.

Then Covid-19 arrived, I became a ‘shielder’, and I realized that I wouldn’t see a wall brown butterfly at all. The internet would have to suffice. I spent a long time getting acquainted with butterfly life cycles on YouTube, and I lolled my head out of an open window to track the breeze. The only grass I could see pushed through the tarmac in front of the pockmarked, long-stationary cars below. I had to use my inner world to connect with the wildlife beyond my door.

I was drawn to the idea of one egg on a blade of grass. I had no idea that many of the UK’s wild grasses had such beautiful names. I grew up in a rural area but had failed to learn anything about the plants I’d merrily trampled on my way to school each morning. It seemed obvious that some of the wall brown’s favourite grasses should be included in the poem.

The structure of the centena – where the first three words of the text are the same as the final three – lends itself to cyclical thinking, so why not the life cycle of the butterfly? Climate change has knocked the wall brown butterfly off course. Adult wall browns fly from late April to mid-June, then again from July to September. Second generation butterflies should grow over winter and emerge in spring, but warmer, longer summers encourage them to hatch prematurely in September and October. By this time, food is in short supply, and the butterflies cannot survive until the following spring. This is the ‘lost generation’.

I’d like to be optimistic about the future of the wall brown butterfly. As we stare down the enormity of our manmade climate emergency, saving the rainforests seems more urgent than protecting the modest beauties of our own countryside. But change begins at home – and if it’s still possible to understand the plight of the wall brown from within four magnolia walls, imagine what we could do if we all lingered outside a little longer?