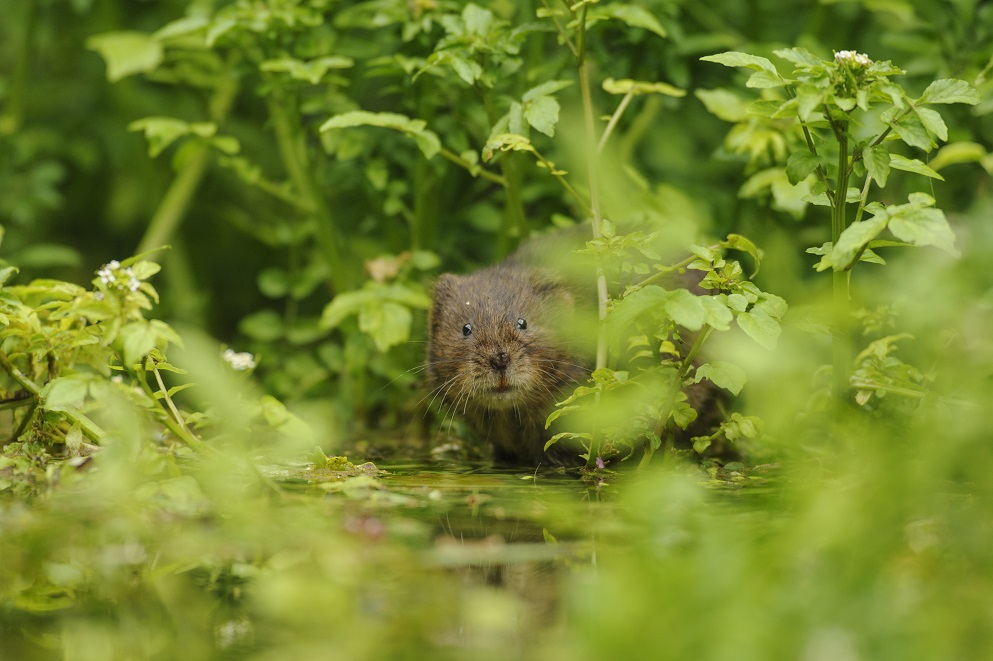 I’m fae Glesgow,
by the M8.
that surprise you ?

Nae wunner we moved,
came to whaur motors roared
sae close;
but nae humans, nae dugs
nae mink, only a kestrel shadow
overheid to keep an eye on,
an the stinkin’ foxes.

Whit did we dae to youse
that you cut doon oor grasses,
blocked oor burns?

And they mingin mink,
they were yours too,
fur coats for ladies,
great idea that,
the buggers escaped
and gave us hell.

We spread from Spain,
We’ll go further if we need to,
if you drive us further.

More about the water vole…

Unlike Ratty in The Wind in the Willows, who is actually a water vole, this starts as a sorry tale. Since the 1950s numbers of water voles in the UK have undergone a massive decline, an average loss of 88%. There are two main reasons. The first is the loss of habitat caused by ‘hard’ river engineering and overgrazing. The natural habitat of water voles includes small, slow-flowing burns, small backwaters, canals, ditch systems, and overgrown field drains, all of which have been ‘improved’ so they are now uninhabitable. The second is the introduction of Americcan mink for the fur industry. The wily mink staged large scale escapes and successfully took to the riversides of UK where they decimated the water vole population. A female mink is lithe enough to follow water voles into their tunnels.

And yet this story may have a happy future as does Ratty’s in The Wind in the Willows.

In 2008 a single individual water vole was trapped in a Glasgow urban garden. It was soon discovered that whole colonies had left the riverside and taken up residence in brownfield sites and even gardens which share a boundary with farmland. Most surprising of all there was a thriving colony all along the edge of the M8 motorway as it approaches Glasgow, This unlikely new habitat, devoid of humans and dogs, has lush grasses, soft earth with only the occasional kestrel to bother them.

Scottish Natural Heritage, Glasgow City Council and the University of Glasgow appointed a Water Vole Ambassador, Robyn Stewart, to lead a project. Her studies so far have revealed some voles changing habits, from a water dwelling to fossorial (tunnelling) pattern, though both types may still be found.

I have always loved stories of animal rebels – *Watership Down, The Bees, Morte, Animal Farm and many more, and I imagine someone, maybe me, taking this tale of the first Scottish rebel vole that left the waterside and struck out for a safer future for he and his kind, making it into a story to tell my grandchildren. He’s a Scottish water vole, which means he may be black haired, descended from an Iberian strain (rather than UK voles which arrived from South Eastern Europe) ) and lives close to Glasgow, which may affect his voice and vocabulary. There’s something very direct about Glaswegian speech patterns which would suit this feisty wee creature, so that’s how I voiced my centena.

Such adaptative behaviour is development that all living creatures must undergo to survive. Such a small creature; such a huge lesson.