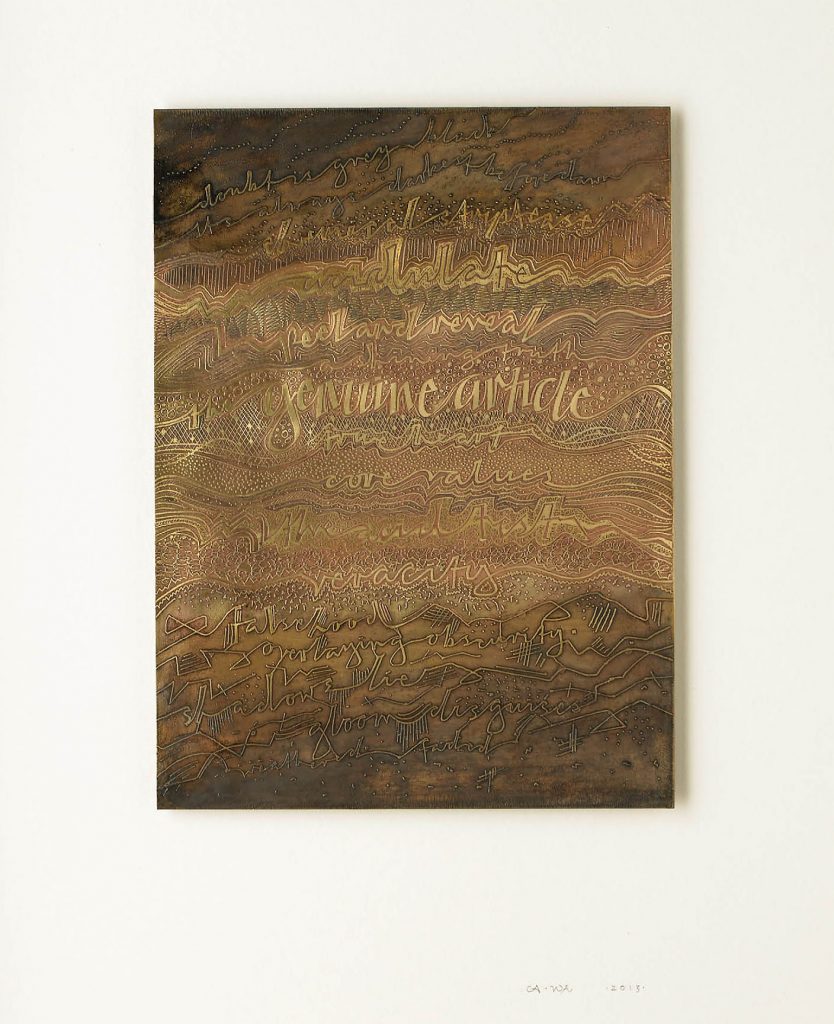 Strangers to each other, Cherrell Avery and I approached the dictionary in the sticky basement of the Betsey Trotwood. In an echo of a wedding ritual, we set about our ‘cake’ with the sword. Cherrell deftly skewered ‘Acidulate’. We blinked. The word was unknown to us. We shuffled back to our places, married to new responsibility.

At the back of my brain, a staccato tap like a blacksmith’s hammer went “Two, Four, Six, Eight, Who do we acid-u-late?” In the cellar bar, crowded, hot and humid, the rhythm nagged insistently.

‘To make something acid, to acidify.’ ‘To sour to a modest degree.’ ‘To use an acidic catalyst.’ The online Wiktionary entries for ‘Acidulate’ offer up suggestions more tentative than definitive. These variations became our springboard as wider, circumstantial events also shaped our journey.

Cherrell’s recent residency at the V&A had awoken an interest in etched surface decoration and lettering. The design on a sword – amongst other exhibits – had especially caught her eye. It was to prove a bridging observation, linking the way a sword had chosen our word to the way we brought it to life.

In Bloomsbury, we slid into the Queen’s Larder, brushing away busy life for a proper chat. As though whizzing the reels of a fruit machine, our thoughts popped up in pictograms. ‘Sour’ put lemons in the mind’s eye. We thought to drip lemon juice over alkaline ink. Warming up, we span further ideas for ‘Acid’. From a school chemistry set, it mutated into a cleaner, a bleach, an etching agent. Rain followed, then narcotics, (Lucy, Sky, Diamonds; later, a pill that symbolized a generation’s muddy dances in lost fields.) Throughout the summer of 2013, a pernicious trickle of stories had seeped into the news like battery acid: dissolute disc jockeys and abhorrent parental neglect were all too evident. Life itself could be viewed as ‘acidulated’. We decided otherwise. Our ambition was for something positive, vivid, tangible. Where next?

“The Acid Test,” suggested Cherrell. It was a Game Set and Match point. This was a winning way to evidence ‘Acidulate’. It is the process that, by the act of adding acid, reveals shiny, visible proof. Her idea was a gift.

“Right,” she said, by way of conclusion. “I’m off on an acid etching weekend.” She was, too. This timely course at West Dean College near Chichester was designed specifically for jewellers rather than printers. A focus on metal was exactly what Cherrell wanted to explore. She had booked it months before. Serendipity was beginning to look like divine calculation.

Weeks later in June, in the worn, wooden confines of a Georgian House on Greek Street, she brandished the results. A series of metal shards, glittering, detailed and enriched by strange alchemical magic, I peered at her work in hopeless admiration. She had spent hours with her bright materials, embracing trial and error as well as following written recipes. Completely open to possible failure, she shared rejected examples as well as those that had ‘worked’. Experimental words stood proud on metallic surfaces. These were the first, literal results of our ‘Acid Test’. I set off that night inspired to try my hand at language to capture it all. She had found the recipe. We simply needed more ingredients.

I wrote a series of fragmented observations. Read as a whole, the piece had the joy of Pink Floyd at their most mournful. Nevertheless, the idea was to provide a brick stack of words to work with.

Cherrell cherry-picked phrases that worked best. As London simmered in unaccustomed heat, she engaged with the words, developed her design and played with etching techniques.

Back at the Queen’s Larder in September, the evidence of her industry weighed heavily. Her art bags bulged. She had worked with acid-etched copper, aluminium and, rewardingly, brass. Selected for its bright, shiny surface that revealed a copper composition when etched, it provided great visual contrast, but was a shade unpredictable. One etched practice piece developed a serious case of copper ‘measles’. Another ended up bright pink. Who knew why?

Cherrell’s account of her experiments was infectiously filmic. She had tracked down metal dealers, used to dealing only by the ton. Somehow, they caved in to her requests for – in their eyes – little more than off-cuts. She had twisted arms, inveigled neighbours into slicing her metals into smaller sizes still and invested in vicious chemicals in her studio. There, she had used a special film used to transfer the design to the metal, the film acting in turn as a protective layer against corrosion. Further polishing and chemical reaction had added character, definition and shine. The results were as astonishing as they were beautiful.

She hadn’t taken a single short cut. Bit by bit, she had unearthed an expression that was practically a physical definition of our word. Even then, she still wasn’t happy. She continued working on further versions, determined to surpass her own, exacting standards. The final result reveals this. Cherrell says of it, “I wanted the Acid Test and the shining words that describe it to appear to flow over the darkness beneath.”

Not once did the meaning of our word describe our time together. We never had a soured moment, never once an acid exchange. We locked on to the same wavelength and never strayed. In the patter of the chanting, childish rhythm that first struck me in the Betsey Trotwood, my conclusion remains emphatic.