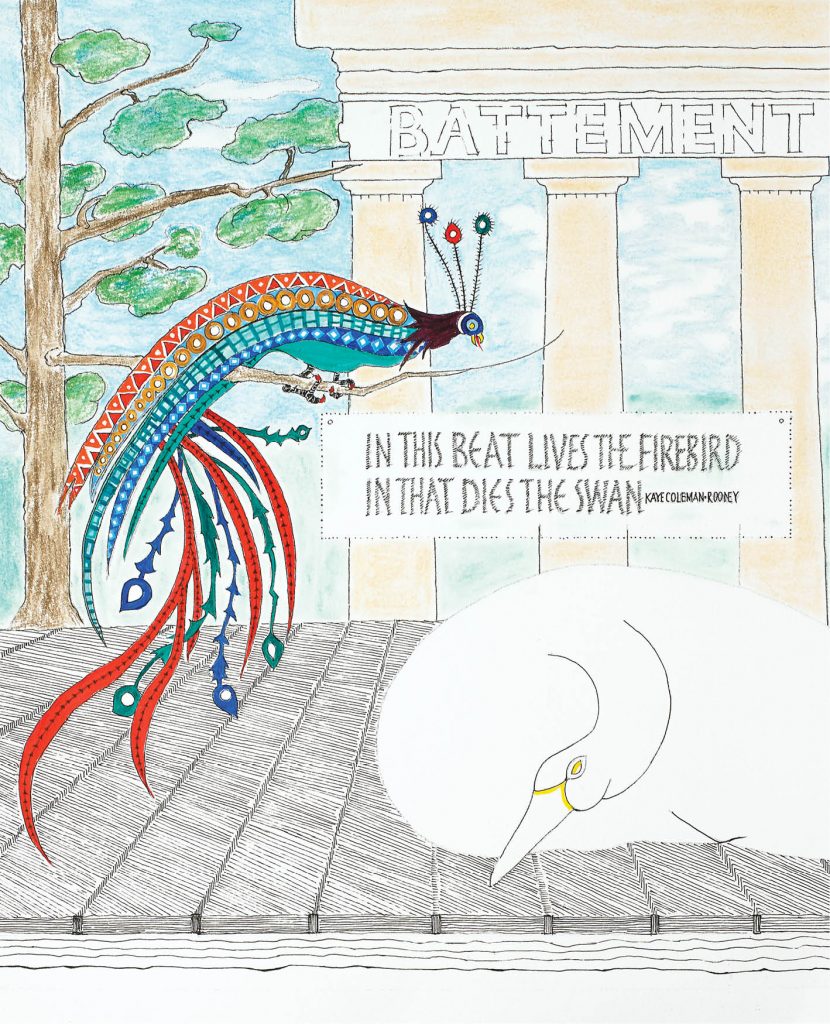 B is for beginnings
Two strangers with alliterative names meet in a cramped London pub named for a Dickensian maiden aunt. “A bit of a shotgun wedding.” says Brenda Berman, artist. Kaye Coleman-Rooney – me – the one who’ll do the words, just picks up the dagger and tickles the deckled edges of the OED – letter ‘B’ section.

This first evening ends with a promise, “We’ll create something we feel passionately about and that will, of its nature, be beautiful.” Brenda says.

B is for bound, bandaged feet
I’m mulling it over, getting ready to write.
But my head is full of images of dance. Ballets seen. Fred & Ginger on silver screen.

The Royal Opera House YouTube channel lets me watch dancers’ daily practice. They flex and massage their bound, bandaged feet. The precision and discipline of the tensioned, repetitive movement is very impressive. Battement is simultaneously restriction, imprisonment and a launch pad to flight, expression and passion. That’s something to capture. Perhaps in a strict, rule-bound form.

B is for Birds
My mind’s eye insists on seeing limbs in flight as beating wings. I think briefly of Milton’s dark angels and then see the powerful white wings of swans.
This is the moment. Swans.
Odette and Odile.
More birds in ballet.
Bluebird, nightingale, Drosselmeyer.
Firebird.

At last, I’ve pinned it down – captured visual potential for Brenda.

In the lament of the swan and the life force of the firebird, I’ve found constraint and flight; restraint and fervour; life and death; love and destruction. Now to stop seeing and start hearing.

B is for Bad poetry
Thoughts of wings, paradox, constraint. The strict forms of poetry. A sonnet is too long at 14 lines. Brenda deserves a decent canvas.
Bowing to battement’s origins, I explore the Alexandrines of French classical poetry.
Woeful squawks.
Can I distil everything I feel about dance – the discipline and the joy – into one short epigrammatic sentence? It’s the only way to give Brenda room to create.
Epigram leads to haiku, to koan to tanka. Oh dear.

B is for beat
I give up discipline and constraint and listen for the beat.

B is for Brenda
When we were first urged to keep a ‘diary’ for the 26 exhibition I thought, “Nice, I’ll make some sort of abstract from the usual daily scribblings and collections of ephemera that pile up on my desk.” When I leaf through them I often ask myself, “OK so where does WORK end and LIFE begin.”

When the words Creation Story suddenly appeared in emails I slightly panicked and thought OMG, I’ll never have time to do justice to this grand title . . . . . but then, slow witted as I am, I realised it might just be a bit of copywriter’s irony.

So my contribution is a short list of some thoughts that have gone through my head since the beginning of the project. The list, in a way, is the reference to which I return when stuck.

Work of art or artefact?

We assume that both come from thinking. The thing then must be self-explanatory in its physical form, plus it should have that added indefinable extra on which the viewer dreams. Is it only the work of art that has the added extra?

Luck
– chance, co-incidence, seeing, thinking about seeing, trying to see a whole picture and then synthesising it, weighing words and translating them into images. How much is simplification the answer to everything? Adaptability.

The idea of a random selection? (Does such a thing actually exist?)

Partnership is a daunting but interesting idea, the process of choosing the word was quite fun but fluff.

The weight of words. The importance of the image.

Balance, contrast, opposition, tension.  Order and hierarchy can be a process as well as an idea i.e. fact or debate.

The most important word from above may be luck. I felt that Kaye and I were lucky in that we seemed able to adapt to each other’s ideas and suggestions. We are both big readers, rich in ideas, and at stages in our lives when we happen to feel pushed for time.

This push may be a real plus because the moments when we do meet or talk are stimulating and densely packed and enable us to move things on. At the first meeting in the dungeon at the Betsey Trotwood I liked the way that we decided to sit in a quiet corner and have our first chat. We were lucky because the word we picked – battement – was redolent with possibilities. All Kaye’s words were full of allusion. Finally she honed them down and came up with the perfect short text which said a great deal in a macro and a micro way.

After that we had quite long gaps followed by great leaps forward the latest of which took place sitting in a very Gill-ish space at the RIBA café in Portland Place. I took along some roughs and samples. We picked out ideas which appealed to us both. Now just a few more decisions. . . . .  and all too soon. . . .to print.