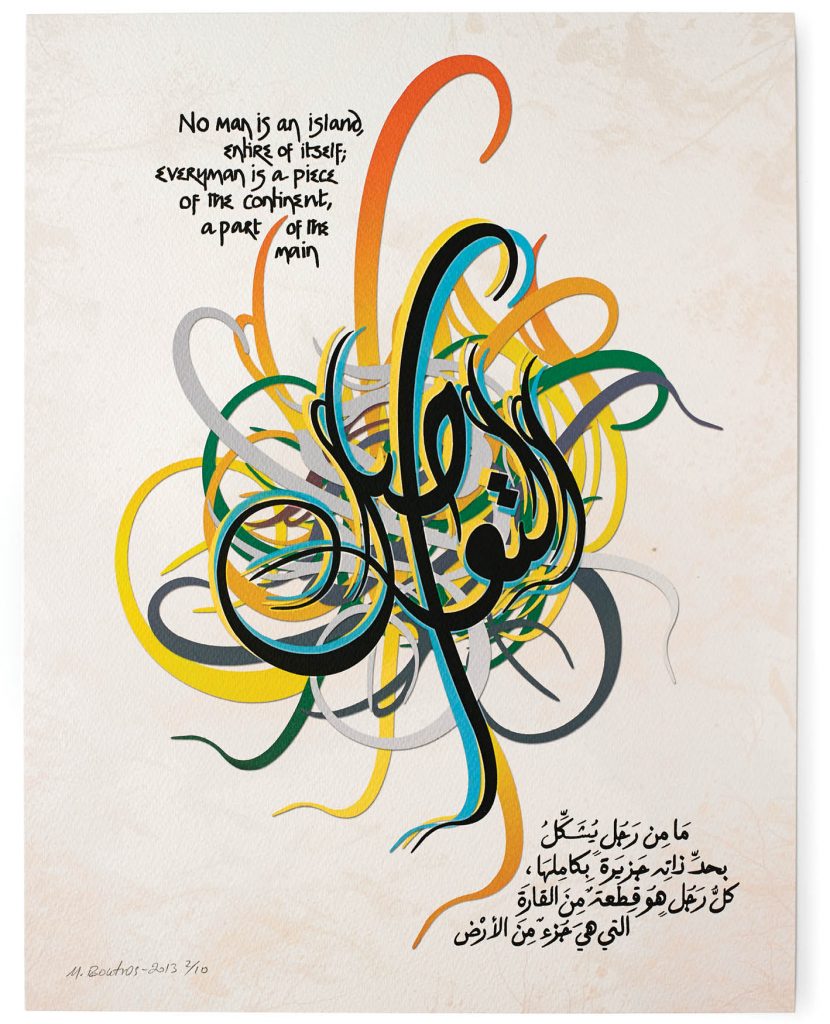 Alastair:
Mourad inserted the knife into the dictionary and through sheer, glorious randomness, chose the perfect word – Connected. Everyone else must be furious.

When we met, we settled on a restaurant in North London. Two men sitting at a table. Crick and Watson. Burgess and Maclean. Blair and Brown. Boutros and Creamer. We could have been anyone.

And, in a way, we’ve become like two men on a mission. We have our regular haunt – Chez Bob in Belsize Park. They gave us the same table by the window. Food has never been far away. We exchanged gifts during our first meetings – small paintings, catalogues and books slid across the table. A ceremony in itself. Secrets being passed. And so much of what he’s shown me is in beautiful code, at least to me.

Mourad is a specialist in Arabic calligraphy, typography and design. I just love handwriting. It is, literally, the signature for my business. So, from different perspectives, we share a passion for the written word. My father had a beautiful italic hand. When he died, I inherited his pen – a cigar-shaped Mont Blanc. I brought it along to one of our meetings. Mourad turned it over in his hands. It felt right.

Mourad:
The word ‘Connected’ is Al-tawasol in Arabic. I found the choice for the Arabic translation quite peculiar yet rich, as it signifies a multitude of meanings: to connect, to communicate, to continue. As the only Arabic-speaking artist in this collaboration between the Letter Exchange and 26, ‘Connected’ seems a fortuitous, and indeed inspiring, choice that brings our two languages together through connection and communication.

My task was to use the calligraphy to visually translate the richness of the word, and hence the Arabic language, by showing how both cultures can engage in dialogue. The main visual element of the artwork, written with a modern twist to Arabic calligraphy, was also accompanied with a quote from John Donne.

Alastair:
When Mourad drew the word for me, all I could think of was to film it – you needed to see the word being created in front of you. And it was as if that would always be enough. But his idea was to write it several times, layering different iterations of the word on top of itself. As he did this, a shape began to emerge – a globe, multi-coloured, rich in swirls and hooks, loops and flecks. And that led to another thought.

My father has somehow been in the air around this collaboration and one of his favourite quotes kept coming to mind, ‘No man is an island, entire of itself; every man is a piece of the continent, a part of the main.’ It’s all about being connected without mentioning the word. It seemed a perfect fit. What would this most English of quotes look like in Arabic script?

Mourad:
I thought it would work well if Alastair’s handwriting was in the final piece so I asked him to hand-write the quote and this would be mirrored by the Arabic version.

Alastair:
Our final meeting at Chez Bob: paper was spread out amongst the remains of lunch, extra pages photocopied, pens bought, pencil guidelines faintly drawn. It took a couple of goes with Mourad gently urging me on (“Try it this way. How about smaller? Why not on one line?”). I handed over my writing to be ‘translated’ into Arabic.

Mourad:
Arabic letters have their particular rules, shapes and flow, which are not always compatible with Latin script. So, I asked Soulaf Khalifeh in my studio, to take a particular element of Alastair’s writing and ‘translate’ it to Arabic so that when both come together in this artwork, the viewer can feel a sense of connection between both languages.

Soulaf:
My aim was to have the Arabic writing maintain its own visual presence and identity while still working in harmony with the English. Both Mourad and I agreed to rearrange the composition of the piece to have the word ‘Al-tawasol’ connecting the English text with the Arabic.

Mourad:
Looking at all these elements as they come together now, I read this piece not only as a connection between two distinct cultures, but also between the art of lettering and of writing, between the visual and the verbal, which further enriches the meaning behind an artwork which holds the word ‘Connected’ at its core.

Alastair:
So this has been a truly connected collaboration – three artists, two languages, one word.