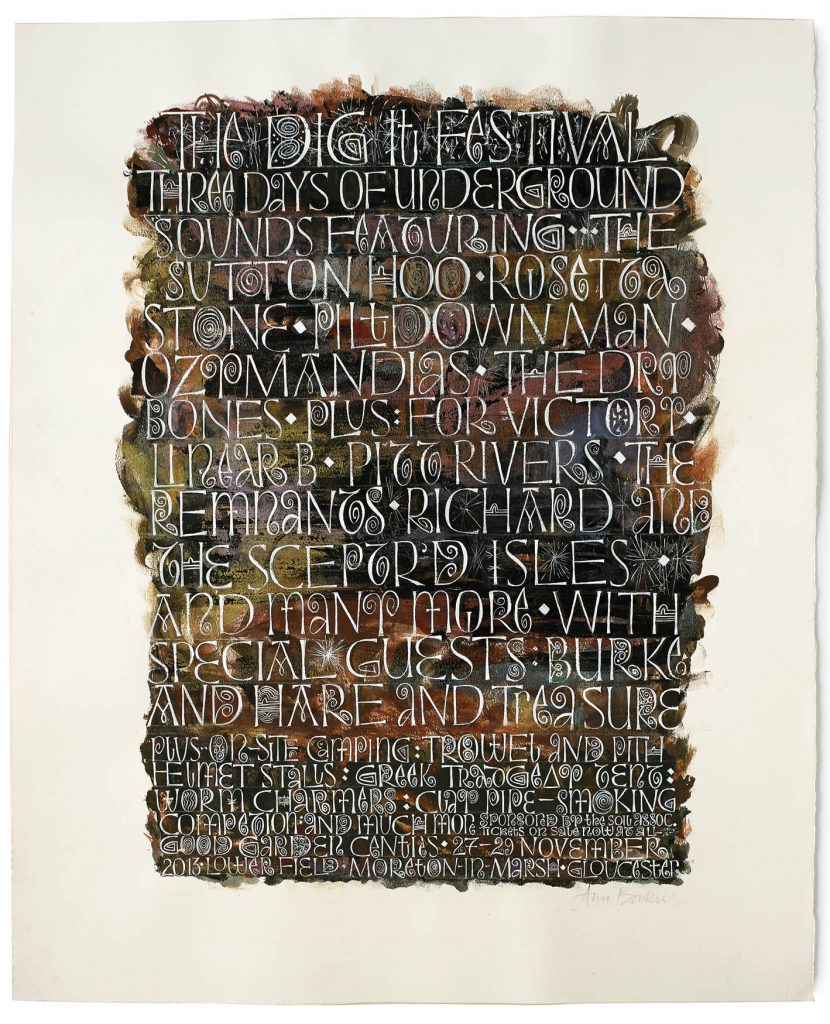 Q: Can you describe what you do in twenty-six words?

Ann Bowen is a freelance calligrapher, heraldic artist, gilder and teacher. She enjoys all aspects of lettering, traditional as well as modern — her work involves both.

Jim Davies grapples with tight briefs daily, helping businesses and brands sound as winsome as possible by politely ushering the right words into the right order.

Q: Why did you choose to take part in this project?

AB: It sounded inspiring to work directly with a writer. I recently took part in the ‘Words Set Free’ Letter Exchange exhibition, which I enjoyed doing, collaborating with other lettering artists.

JD: Ten years ago — when I was a mere stripling — I took part in the first 26 poster project. I was lucky enough to paired with design legend Derek Birdsall, and the experience was intoxicating in more ways than one. I’m really into letterforms and typography, so I had no hesitation.

Q: What were the first associations triggered by your word?

AB: There were many: I really wanted to write about an archaeological dig… Richard III especially, as his skeleton had recently been dug up in a car park in Leicester. Also a political group, jazz or rock group, recipe, allotments, a new style of lettering…

JD: ‘Dig’ may only be three letters, but it has many meanings and nuances. When Ann and I took part in the shamanistic knife ritual in the murky basement of the Betsey Trotwood pub and our word was revealed, I immediately thought “Wow, I’m digging this”.

Q: When you met your opposite number was there creative chemistry?

AB: Yes. I had good vibes that we could work well together on our initial meeting at the Betsey. I have a passion for what I do, which is calligraphy, and I think Jim does equally as a writer. I then found out on the 26 website that he was one of the founder members of 26 and their first website and newsletter editor, and was delighted to be working with him.

JD: Our first meeting was at the pub when the words were drawn, and it was a bit of a free for all. We seemed to get on from the word go… you go into these things hoping for the best, and trusting your other half.

Q How did the first set of ideas develop, and how did you feel about them as an approach?

AB: We contacted each other via email, and it took a while for our ideas to gel as we couldn’t agree on a route. We finally went for Jim’s concept of a poster for a fictional music festival. His words came together from ideas I wanted to do, so it worked well in the end.

JD: I sent Ann various lines and even a couple of bad drawings by email. I’d seen examples of Ann’s impeccable calligraphy online, and thought a complete contrast of message and medium might take us somewhere interesting. There were several false dawns — including Richard III and car parking spaces, and something around mild insults through the ages.

Q: How and why did you settle on your creative route?

AB: There were compromises. The ‘Dig it Festival’ route had a mixture of each other’s ideas. Jim’s writing is original, fun and quirky. The size (17″ x 21″ portrait) meant creative options were limited, as there wasn’t a lot of space to play with. Jim gave me quite a lot of words but asked me to choose the text as he realised it couldn’t all be included, but most of it is in there. I wrote out two different versions and asked him to pick the one he preferred.

JD: It was a subject we both felt comfortable with, and a joint idea. Ann had mentioned perhaps doing something around a rock or jazz group, and I extended this into an ‘underground’ festival. We’d also previously discussed famous archaeological finds, and it struck me that some of the more esoteric names could easily pass for band names, anything from prog rock to rap. This gave plenty of scope for wordplay. Festival posters are an interesting and established graphic form, where loads of strange, intriguing words have to be packed into a cramped space. They tend to follow a fairly given template, but the lettering styles can be quite expressive, and are many and varied. I felt confident Ann could craft something fantastic, and she didn’t disappoint. When she pulled the work out of her portfolio, it took my breath away — it’s really quite beautiful.

Q: What was the most difficult thing about this collaboration?

AB: Distance and heavy workloads created a bit of a problem, as we only met twice, and mostly liaised by email.

JD: It took a while to find a subject area we were both happy with… but after we’d met face to face a couple of times, we started to connect a lot better and found common creative ground.

Q: What has been the most valuable insight you’ve gained from working on the project?

AB: Collaboration. Connecting with ideas. Listening more, being more understanding, more patient. The need to make compromises. Working with a writer has been inspirational. Jim has quite a good sense of humour and I think that helped enormously. It did break the ice at times!

JD: Everyone digs a good music festival, and if you persevere, things tend to come good in the end.

Q: How do you feel about your word now?

AB: I think we have well and truly exhausted the word. It’s been dug up so much and now I want to dig into something else.

JD: Lucky. The word before in the dictionary is ‘diffuse’ and the word after is ‘diggama’, an obsolete letter of the Greek alphabet. A narrow squeak.

Many thanks to Tim Rich for supplying the questions. We answered them independently.