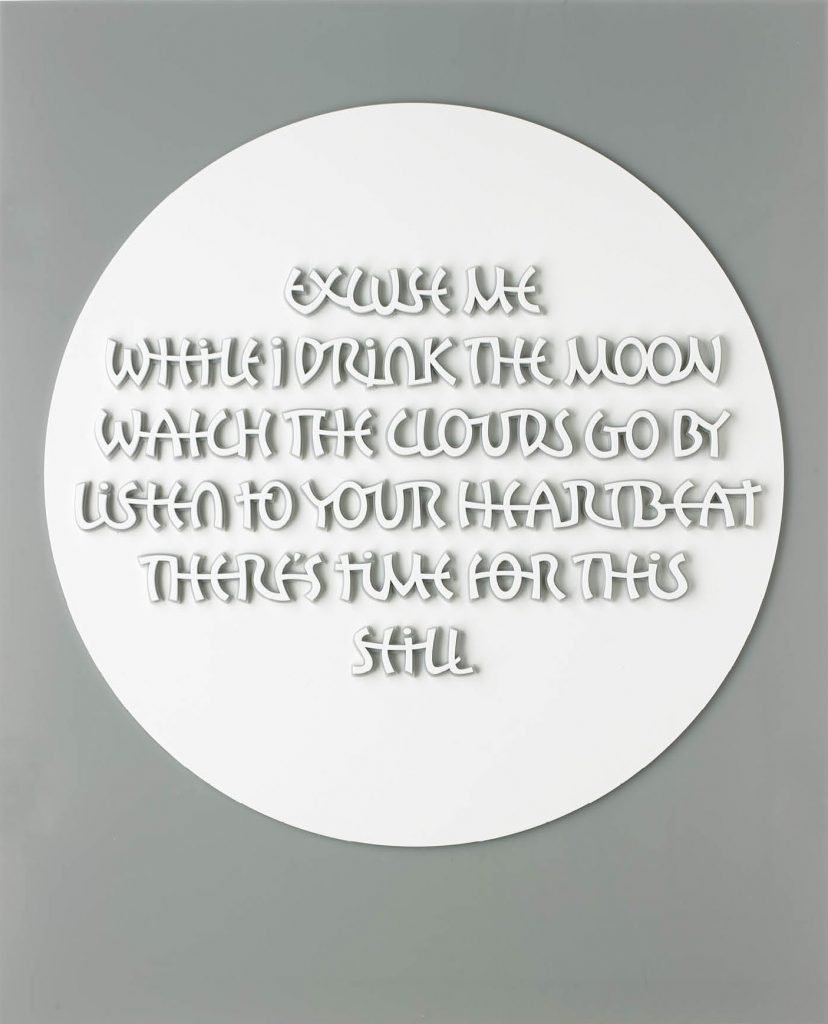 Excusation. That was our word. So archaic it spouts a red line on Word.

And, if your eyes blur, might read as exhaustion. It means an excuse, a defence. We decided straight away to use the modern word. Then it was left to me to come up with a written defence. We had decided that it should be a short piece.

Rightly, I think, for the medium and size. Though defences, to my mind, were meaty speeches or orations, barrister-like or – dream on – like Mark Antony. I felt excited by the medium and the concept but uninspired by the word. Mark Antony may not have come to bury Caesar but I would have dearly liked to bury ‘excuse’.

I’d seen some of Robbie’s work online, admired the lettering and liked his work in wood. Wood: so warm. I thought of Wood, heart of the Wood, the long winter – this was April before summer bust out – and my excuse for being curmudgeonly; my longing for the sun. I wrote a few haiku and thought ‘job done’. But Robbie wanted to explore new materials – metal, Perspex. My haiku for metal wasn’t so successful.

Then the excuses came thick and fast, top of the list being ‘Bloody 26 project – why did I sign up for yet another one? Doesn’t pay, won’t play!’ Meanwhile Robbie was waiting for more haiku. By now the sun was there in the sky morning upon morning and my April thoughts had evaporated.  Well, that was my excuse. But I stared at that word. I thought of that word. And I walked with that word. Nothing. Until one night, around midnight, out with the dogs down the Kitleyknowe Road, bathed in moonlight, stars all present and correct, sheep on the hills like Bethlehem, noun shifted to verb, akin to a muscle relaxing. ‘Excuse me.’ And that Jimi Hendrix lyric was in my head: ’Excuse me while I kiss the sky.’* And I could have kissed the sky that night it was so beautiful. But that’s not the way it works: wait, listen. It was more like it kissed me. And I drank the moon. Excuse me, relentlessly marching time, indulge me my brush with eternity. Later I thought – that would be apposite for metal, or Perspex. Yes, that would be quite fitting. No more excuses.

(Postscript. Now this is strange. But true. As the summer moved along, an ageing session musician moved into our village – in the Pentland hills in the Scottish Borders – a guy who had played music with Hendrix in New York before he became a star. I savour coincidences. When Robbie’s piece is ready and I have my copy I’ll have to knock on this guy’s door and say ’Excuse me…’)

Post postscript. I was galvanised into writing this creation story the evening I heard that Andy Hayes was coming on the Dark Angels course I was running, due to start five days after the deadline. I thought how embarrassing it would be if I had to make an excuse to him!

PPPS. We almost got diverted. At the same time as working on this project I was helping edit the Dark Angels collective novel ‘Keeping Mum’. All the contributions were in but one – in its place this excuse: “Sorry – couldn’t meet the deadline. Had to host a strategy day and worm and maggot spray the sheep.” I loved it. What a window into an atypical life. It got me thinking that maybe our text could be an excuse for not doing the work, which would of course be the work itself. But we were too far down the road. That’s our excuse.

Now it’s probably time to read something sensible. Over to Robbie:

As a letter cutter most of my work is in unique, one off relief carving. I was excited by the brief for this collaboration, that we were to make repeatable works, multiples such as prints. Stuart’s words suggested a layout and a form and I tried a number of experiments as to how I might make a three dimensional repeatable. I thought of making a cast but realized that rather than making a reproduction of a piece that I might have carved, I had the chance to make a three dimensional object that is both easily repeatable and specific to both its material and method of production. I produced vector drawings that controlled a CNC laser-cutting machine to make a series of parts, exact to my drawings. The parts are pieced together by hand.

*For Hendrix cognoscenti: the lyric as I heard it, and remember it.