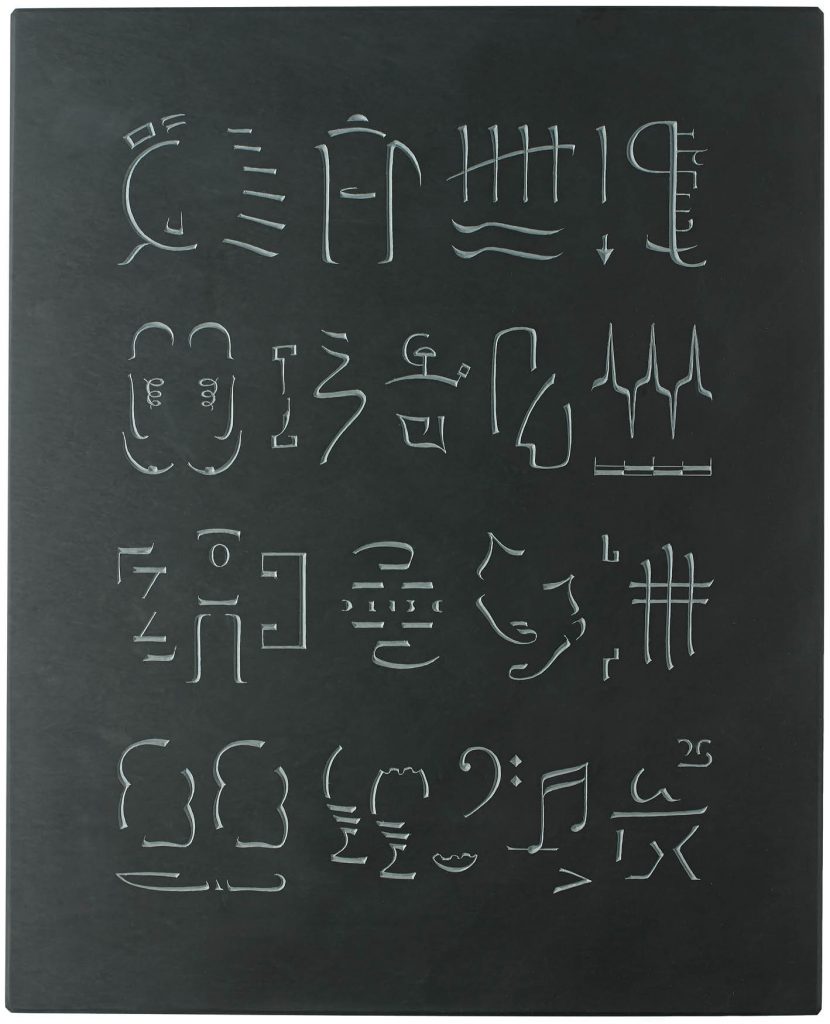 The apprehension of a new and unknown project was heightened by the fait accompli of slicing a knife into a dictionary. Packed into the basement of the Betsey Trotwood there was a feeling of camaraderie in meeting new and old faces, whilst the plot thickened to the moment of inevitability. Mike cracked an aside that immediately assured me we had a similar sense of humour before the word Fraction appeared as our own. Our immediate reaction was there is quite a lot of scope to that!

After a few weeks musing about Fraction, I thought how my work related to our word, and how it is in someway part of the whole. Carving maps, one focuses in on a particular place in the world. Sundials are primarily astronomical and navigational instruments, whilst my interests in foreign languages and palaeography always leads me to wonder about the individual brush and pen strokes that make up a complete character.

Mike sent a wonderful initial collection of bullet points, most notably, the seasons, primary colours, and divided self. We were on our way! On a long drive and passing the sea, thoughts progressed to wavelengths, tempo, and hence music. Mike came back with Benjamin Britten’s “Sea Interludes” – I have often wished to carve a score.

The struggle of encapsulating a topic as concisely as possible into just a few words for carving reared its ugly head in a time-honoured tradition for lettercutters. Mike mentioned with more adrenaline that he had a narrative in mind but it would be too long to carve, which pleased me, as brevity can sometimes seem contrite or edictal when carved in stone. How I would develop a visual interpretation of the story could have endless possibilities.

So we met up, Mike handed me the page, which brought smiles and laughter as it contained much of our emailed exchanges. For the rest of a delightful afternoon we talked about many of our mutual interests and most things under the sun. On the bus home, excited by the prospects, I also reflected on how a truly successful collaboration brings people together, with the energy to pursue the task in hand.

At first, various lines or phrases stood out but I realised I would be falling into the same trap of brevity, and only using part of the story. This would not do it justice. Then I noticed there are quite a number of visual items throughout the story, the idea of pictograms and hieroglyphics enticed me.

It took a few versions before I could send a reasonable first draft to Mike, whose reaction was wonderfully supportive and enthusiastic. In defining the drawing, it seemed suitable to our word that some symbols are quite representational, while others are more abstract. Little did I know that creating one’s own language may take 26 drafts – apt or coincidence for this exhibition!

The alarm sounded at 7.30 a.m. Dressed and bleary eyed, he
descended the stairs, scooped two tablespoons of strength four
Colombian coffee into the cafetière, glanced down at yesterday’s
unfinished crossword – 6 down, 8 letters – Any number of equal
parts. – Hmmm?
He set his stopwatch to zero, slipped on his size 8.5 Nike
Air trainers, opened the front door, checked the porch barometer
(which indicated a crisp -3°C) and, with a quick intake of breath,
sprinted forward into the morning chill.
On reaching no. 14, with its distinctive olive green door, he
triggered the stopwatch. From No. 14 back to his front door was
exactly 2 miles and over the course of the run his heart rate would
settle at around 160 beats per minute.
When running he liked to focus on particular things: door
colours of red, indigo, chocolate and apple green; and the many
cast-iron covers that populated the pavement on the journey. They
also kept him alert to the frequent deposits of dog crap – he had
never understood how people could scrape up fresh squelchy turds
by a hand enclosed in a thin, plastic bag. The fact that it could split
made him feel distinctly queasy. Glancing down again, he noticed he
was wearing odd socks. This filled him with dread; he hated getting
things wrong.
Rounding the bend, his familiar yellow front door came into
view – 8, 7, 6, 5, 4, 3. He hit the front gate two seconds before the
stopwatch sounded. Perfect.
Back in the kitchen. The kettle reached the optimum 92°C
and he poured the steaming contents into the cafetière, and then
buttered two slices of perfectly browned toast and cut them in half.
An audible ping denoted the climax of his two four-minute eggs.
With the radio tuned to 94.5 FM, he sat down for breakfast.
Looking down again at the unfinished crossword, he picked
up the pencil and filled in the remaining squares: F-R-A-C-T-I-O-N.