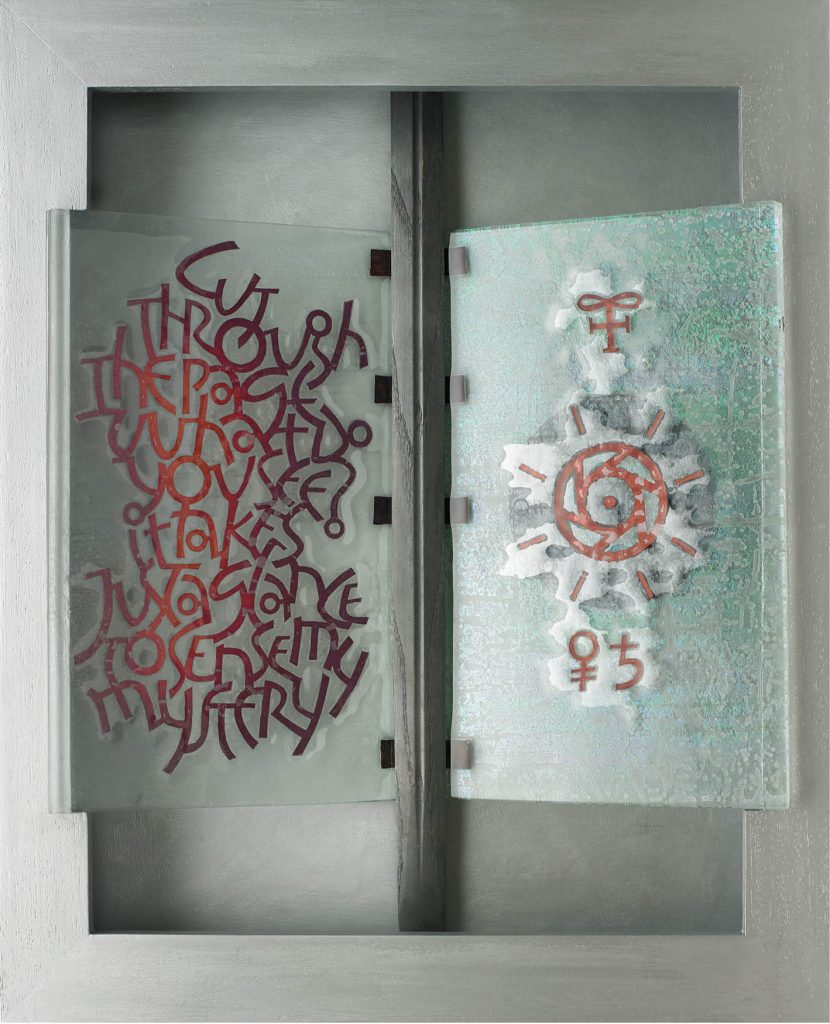 Glance, v1. 1. A brief, hurried look. 2. To strike at an angle and bounce off obliquely, as with a sword or blade.
Glance, n. A variety of ore having a lustre that indicates its metallic nature: copper-glance, lead-glance, silver-glance.
Glance, v2. To planish: to smooth or flatten metal.

It began in the Betsey Trotwood pub in April 2013. Sarah took a knife and inserted it into the Oxford English Dictionary, aiming towards the ‘G’ section. It was an inelegant act. Instead of the blade stopping neatly it cut a hole in the paper and landed on the word glance.

Having secured our word, and, at that point, having never met, we each did the same thing and looked it up in the dictionary. But that was as close as we got in the beginning in sharing an approach.

Sarah thought about the various meanings of glance and how she could describe it. What other words came to mind? Did they tell a story?

Rosella thought about the various meanings of glance and how she could represent it visually. How would it look? How would calligraphy bring it to life?

A week later we met in Rosella’s studio and talked about the ideas of movement and looking, and how we could also include the metallic element. We looked at different materials, including glass and copper. Could we combine these? We liked the idea of copper, because of its reflective quality, which we felt complemented one of the meanings of glance.

Taking this idea, we decided the writing should be in the form of a sestude: a piece of exactly 62 words, which represents the number 26 ‘in reflection’. But, instead of writing 62 words, we’d use 26 and find a way to reflect them to give the illusion of 62 words. Would someone who merely glanced at the piece see this illusion? In this way, mystery became our central theme.

Sarah wrote dozens of 26-word pieces. And Rosella began researching ways to transfer the words onto glass. She went to glass exhibitions and looked at glass artists’ work on the web and in books. She visited a glass workshop in North London and learned a great deal about painting and printing on glass, but realised that these techniques are mastered after many years of trial and error. Our deadline did not give us that much time.

In June Rosella went on a Letter Exchange visit to Lucy Quinnell’s Fire and Iron workshop where she discovered Eryka Isaak (www.erykaisaak.com), a glass artist based in South London. She cuts symbols out of steel or copper and bends and hammers them by hand before sealing them between two layers of glass. Rosella bought one of her pieces and contacted her to ask if she could help us. From their first meeting Eryka was supportive, enthusiastic and exceptionally helpful.

Eryka’s work inspired Rosella to cut our words and symbols from copper and insert them between two sheets of glass. But the cutting technique meant that 26 words would be too many. The sestude idea was over.

Then we hit another wall. Rosella wanted the finished words before she could start working with them. In her calligraphy work usually the text is the starting point, the meaning or mood of words informs her choice of letter shapes, layout and materials.  And Sarah was struggling with them. She’d written several versions and now had to start again using fewer words. She hadn’t seen the glass and copper samples and some visual inspiration was needed if she was to write about them.

It was a turning point in the project. Would this be the end of our collaboration?

So, we met, and, over food and a bottle of wine, Rosella’s sketchbook, Sarah’s notebook and Eryka’s glass art we began to understand how to work together. Rosella was surprised that Sarah wanted to see visuals – she hadn’t realised that her sketches and material samples would help the writing. And Sarah hadn’t realised that Rosella had been waiting for her and wondering why it was taking so long to write just a few words.

Rosella showed Sarah some sketches she’d made of the symbols for copper, lead and iron. Could we find a way to include them in place of the reflected words from the original sestude idea?

And so, between the wine and the notebooks, something started to happen. Sarah loved Rosella’s calligraphy samples: the loops on the ‘g’ looked like keyholes. Would someone be able to unlock them with just a glance? And could she convey this in less than 20 words?

The crisis was averted. Sarah started writing again. For just a few words there were many rounds of edits. With the final version something didn’t feel quite right to Rosella, so she suggested a change. When Sarah read it aloud the rhythm was off by just one syllable. A final tweak and it was complete.

Rosella needed Eryka’s kiln for the next step. Under Eryka’s guidance, she placed the copper words and symbols between the sheets of glass and put them inside the kiln.

The kiln had to be heated to 800 degrees for 15 minutes in order to fuse the glass. Eryka warned that this technique is unpredictable and there was a possibility it might fail. To add to this anxiety, we had to wait 24 hours for the kiln to cool back down to room temperature before we could see if it had worked. Eryka set the timer on the kiln and we waited.

Did it work? Our collaboration certainly did; we enjoyed working on this project and became friends along the way.

But, you’ll need to visit the exhibition to see if the kiln worked its magic on our words…