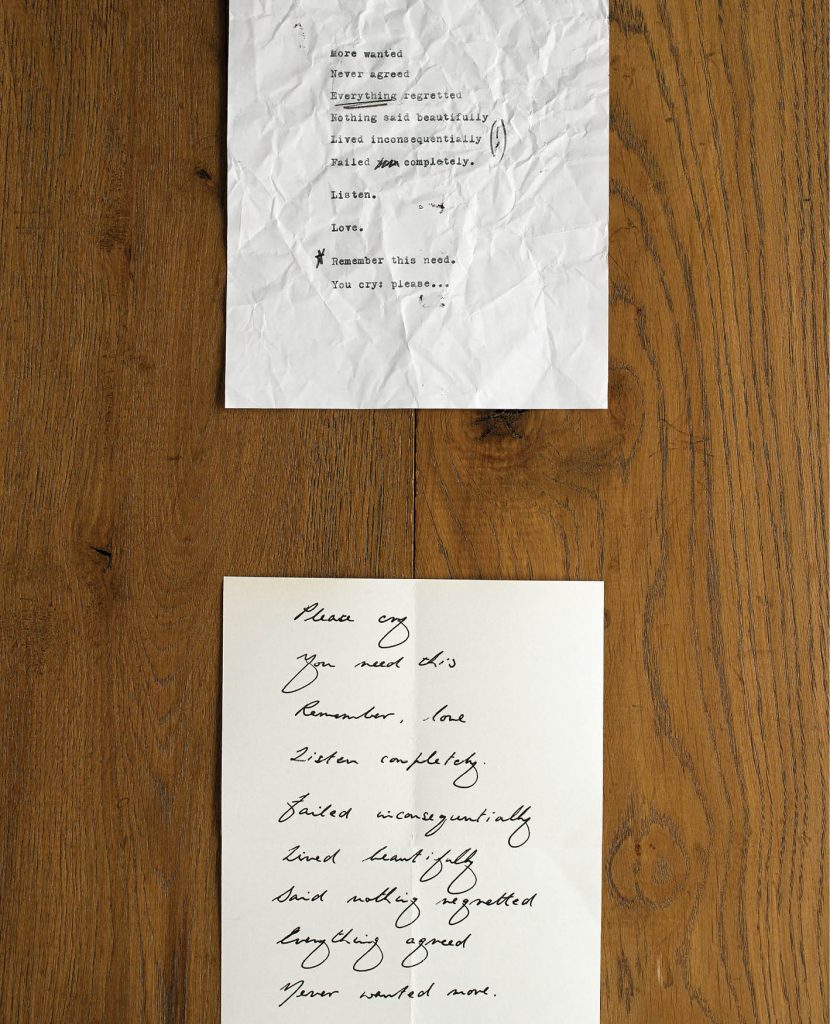 Ever wished you’d said something and now it’s too late?

My word, Hearse, was chosen for me on the day my Mum died. She had a massive brain haemorrhage at home and never woke up. I appreciated the irony of the coincidence, as my Mum would have done, and decided not to ask for a different word.

Initially I thought I could put my Mum out of my thoughts and write something hearse-related that had nothing to do with her. It didn’t seem fair to dump all my grief onto Mark, my collaborator. And my Mum’s death was the last thing I wanted to write about, or even think about.

So I began on safe ground, researching the etymology of my word. A hearse was originally a framework for candles that hung over a coffin. Its root is in the Old French herce – a long rake or harrow. That gave me a line, “Hearse, rake the coals of my heart”, which eventually became our title.

Bewildered by the possibilities, and with a deadline looming, I decided to give myself a constraint. I would write a palindrome – a string of words that can be read backwards as well as forwards. This was tricky, but fun. I was pleased with the result.

But I decided it wasn’t good enough. It just didn’t say anything. And I had a nagging sense that I was avoiding what I really ought to be writing about. Then I noticed that the word I’d been trying to dodge – mum – was itself a palindrome. That seemed like a sign to carry on, and to dig deeper.

So I started again. I wrote mum in the middle of a big sheet of paper and built a new palindrome around it. I wanted that central word to be a turning point. Everything leading up to it would be in one voice, with one meaning; everything afterwards would mean something very different.

This was hard and painful. I wanted to write something that was about loss and regret and love and forgiveness. It would be inspired by my mum, but I wanted to leave room for other people to relate to it in their own way.

Before Mark and I agreed the final text, we both felt one last change was needed. The word at the centre of the piece, around which everything revolved, had to go. For me it was a painful cut, but also a release. What remains can stand on its own.

As a word, hearse is unambiguous, there are no subtle variations or multiple interpretations, it is what it is. This should not make it any more difficult to work with, sometimes it’s the limitations and constraints that fuel the creative process.

When we met, Neil and I discussed how a hearse carries more than a coffin, it carries the weight of emotion of those left behind, the personal experience of losing someone close.

This was captured beautifully in Neil’s text. And more than that, it was a palindrome – plenty of potential to play with layout, exercise some graphic tricks, and create a smart, symmetrical layout.

But the more I read the words the stronger the conversation between the two voices became. And I felt it was not a conversation these people had had face to face. It felt more like something lost or missed or held back; a conversation never had and now too late.

How can you represent this? The subtleties would be overwhelmed by self-indulgent graphic exuberance.

To my surprise, playing with shape in part led to the solution. I sketched the frame then, out of curiosity, experimented with how our initial letter H fitted into the shape. It was the spaces left that became interesting. I saw these as two white rectangles sitting on a dark background, mirrored but separate.

And you can never really touch a reflection, the words and form were starting to mesh. This was a conversation from either side of the end of a life, a thought never delivered, a message left behind.

For the first, an old typewriter was ideal, maybe one owned by the departed. Words hammered hard into the paper. Neil’s suggestion of annotations helped add another level of emotion, frustration maybe?

For the other, a mature, traditional hand, readable, steady, sure and comforting.

To contrast these, at first I had one crisp and clear, the other old and faded. But this changed to angrily scrunched against calmly, carefully folded. More about emotion than time passed.

Our collaboration was minimal but very effective, the concept developing in a few clear steps. My visual response dictated by the emotion of the words, the words edited to suit the visual. Thanks Neil for providing such great words to work with, I had no idea this is where we would end up when we began.

Always have an open mind, let the answer find you.