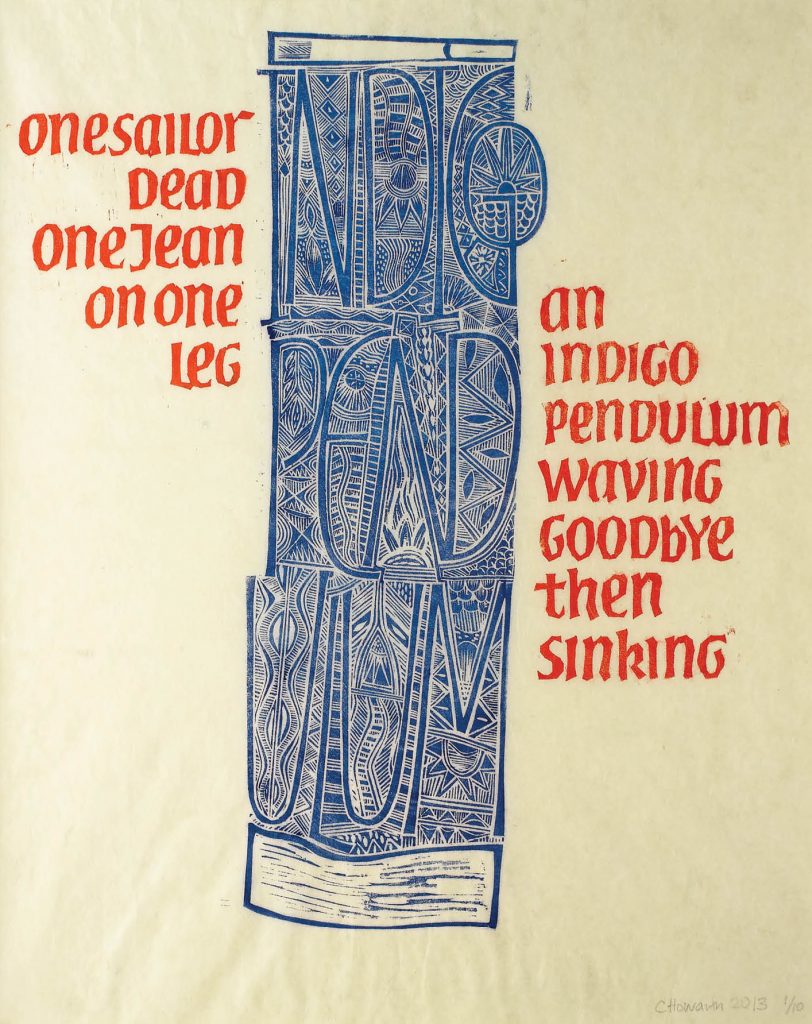 The first thing to say is that this story contains no creative tension, negative vibes or petulant stamping. Sorry, but this was a happy coupling. We got on well from the off and it stayed that way. We landed up in a joined-up place, with each of us taking on board ideas, insights and direction from the other.

AH: Charlotte carves tombstones for a living, amongst other things. Death worms its way into my subconscious. She sends me one of her self-initiated pieces – Bag Lady. It’s right up my street, nothing too formal; she has a light touch, which I really like.

CH: I’ve been thinking about our word, and different ways of making an edition. In some ways, as a carver, this is the biggest challenge, as carving an edition would be too time consuming, so I’m thinking I’ll do some kind of print at the moment, but not sure exactly how. I’m hoping the words will give me the direction. Also – don’t write too many!

AH: Maybe broad themes could include: the material, rights of passage, sex, freedom, being tough/robust, or cool.

CH: I spent the afternoon getting some roughs together, should have been writing up a report, but this won out! I’ve noticed how the thread/stitching is always a double line in anything denim, might be something we can play with?

AH: Yes, I like ideas around the material. Good old Wiki. I found out that jeans originated in Genoa. Sailors used a fabric similar to corduroy to cover their goods in stormy weather. The French referred to this material as Gênes. They tried to replicate it in the French city of Nimes, failed, but eventually developed another similar fabric. This became known as denim, literally meaning ‘of Nimes’.

AH: There’s a line in Bowie’s Jean Genie, ‘Let yourself go’, which makes me think about abandoning inhibitions. I write: Jean is a girl / Who delights in her curls / And gives all her favours away.

Also this, inspired by the classic Levi’s launderette ad: Jean / Let’s get dirty / Jump in a hot tub / Then tumble in the dryer.

CH: I really liked the direction of some of the text that you have sent, but, as it’s such early days, I thought that we could run with a few parallel ideas at this stage, and see where we go – sometimes the most challenging things can be the best. So do please keep sending stuff. I love the idea of doing something fun and frivolous for this exhibition.

I also include my first roughs for you. I like the thought of having the images in layers, with different colours coming through, as though the denim was wearing. Jeans fade because the dye is only on the outer pile of the twine, so as it wears the white starts to show through.

AH: Great to see my rough words in your roughs! Rough is good. Down-home and dirty, just like jean. I’ve been thinking about ‘jean’ in the singular. On the one hand (or leg) it makes things a bit tricky. Who refers to jeans as jean? No one. But, on the other hand, it might present an opportunity. I was talking to a friend today who thought it was interesting that we had jean not jeans: A single leg.

And that got me thinking about loss. I saw a poor man on Blackfriars Bridge the other day: one leg of his raggedy trousers torn, his face muddy, muttering to himself. Was he about to jump? Did he need my help? I never found out. I kept my head down and carried on cycling to work.

So, I’m writing a short piece about an old soldier, with a missing leg, about to jump off a bridge. Happy Days.

AH: I did some more work on the old man. He became a sailor after I re-read the Wiki piece I shared with you before. He’s down on his luck. Only has one leg, and been thrown out of the Seaman’s mission for being an obnoxious drunk. He hobbles down to Blackfriars Bridge and jumps. No one mourns him. Only us.

But then I went back over your emails and saw your clear desire to do something fun and frivolous. Hopefully you’ll agree that the piece is quite light-hearted despite being dark! I love your approach to ‘Let’s get dirty’ and I’m sure your light touch will lift my gloomy words.

CH: Glad about the fun and frivolous. I’ve been thinking about the layering of the words as images on the paper.

AH: What would a jean say if it could speak? Rip me / Dye me / Please defile me. We could also use the Levi’s numbers eg Jean 501, Jean 507 – they’d have different personalities depending on their styling eg Slim Fit, Boot Cut, Flare.

CH: We’ve been laying a floor in my workshop – hard work, so no room for anything else other than sleep at the end of the day. I am just about getting the chaos in some sort of order that I can work in now.

AH: (After meeting up.) It was lovely to see you again and see the roughs. Your creative process fascinates me. Thank you for explaining it. I’m glad we have a short list for you to work from.

CH: Not had chance to sit down and mull over your words yet, but I’ll find time to sit, digest and draw next week. I need a pencil to think at this point. Will let you know what direction I am moving in as soon as I have one to share.

CH: I’m thinking about the sailor but keeping 501 in mind.