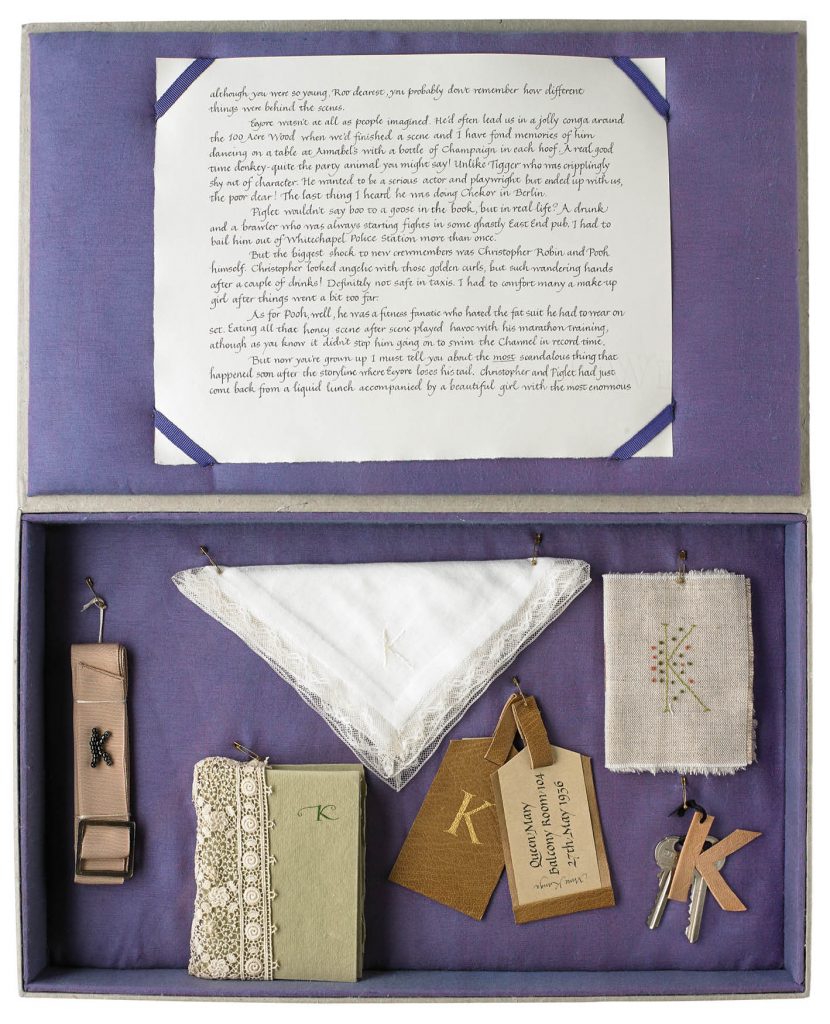 RH April 17th
To London, and the intimate if somewhat sticky downstairs room of the Betsy Trotwood pub in Farringdon. There to (a) meet my lovely creative partner Sue and (b) chose our word, which turns out to be…Kangaroo. First thought: it could be worse. Second thought: actually, there is no second thought. Sue and I agree to give it some thought.

RH April 19th
I’ve been giving it some thought, and I’m not getting anywhere.

RH April 28th
In today’s paper is a story about a kangaroo spotted alive and well by a roadside in Lancashire. There was even a photo. So how about a short story from this kangaroo’s point of view, written in broad Lancastrian (“Am reet proud o’ ‘us Northern heritage, working down t’ pit, buck an’ joey.”) Hmm…

RH April 30th
It’s funny how things work themselves out. As I was writing an email to Sue that gathered together all my rubbish thoughts so far I suddenly had the idea of doing something using the character of Kanga from the Pooh Bear stories. Perhaps a spoof discovered letter. That could be fun.

RH May 10th
I’ve arrived at a decent “proper” draft. I’ve taken out a few smutty lines from previous versions and I’ve addressed the problem that the original idea was about “kanga” and ignored the “roo” part of our word. Now the found letter is from Kanga to her son Roo, which does the trick. I’ve sent it to Sue – fingers crossed.

RH May 24th
Senora Hufton, she say Yes! She’s also come up with some fabulous suggestions for how all this might work as an exhibition piece, knocking my idea of a simple poster into a cocked hat. Now we’re getting somewhere.

SH June 20th
I’m toying with several possibilities about how I can present Kanga’s memorabilia. I envisage her in two ways, so I’ve asked Roger how he ‘saw’ her – is she an elegant but faded old lady with subtle colours and muslin and lace etc, or an altogether much more striking presence in silks and velvets of rich jewel colours? Either could work but I know which I’m veering toward. Roger’s answer delights me because I’ve already begun using colours that fit my picture of her:

“I suppose I see her as the elegant, slightly faded grand dame, a leftover from another era. She would have been a Bright Young Thing when she was a youngster, but time has aged and faded her mementos somewhat.”

Kanga was born at Borroloola Sheep Station in Australia’s Northern Territory in 1889.

Her talent for acting was obvious from an early age; at five she starred in the Christmas pantomime and aged 11 her teacher recommended she attend La Picante Pimento Ladies Dance and Drama Academy in Darwin. She excelled there and came to the attention of Waxy Rothstein, a London theatre impresario touring the colonies in search of fresh talent.

By 1905 she was a regular at Drury Lane, specialising in light comic and musical numbers and sharing the bill with stars such as Sarah Bernhardt who became her mentor and role model. During the First World War she toured Flanders with the West End Glee Klub.

In 1922 she was cast as Kanga in the Winnie-the-Pooh stories, a role that came to define her career. At her insistence her young son Roo played her fictional joey, a decision both were later to regret (Roo’s father – Digger, Regimental Kangaroo with the 101st Wollongong Yeomanry – had died during the Somme Campaign after breaking into the quartermaster’s stores and drinking a gallon of Army-issue rum for a bet).

By the time the last Winnie-the-Pooh story was in production in 1933 Kanga was immensely wealthy, with a large town house on Bloomsbury Square and a country estate – known affectionately as “The Pile” – in Wiltshire. Her canary yellow Rolls Royce, fabulous diamonds, pet lobster and interest in surrealism, together with her friendship with Virginia Woolf and the Sitwells, earned her a reputation for eccentricity (Sacheverell Sitwell described her as, “That wonderful wonder from Down Under”).

She went on to work with all the great mid century theatre and film directors in both the UK and Hollywood, playing opposite the Marx Brothers in “Hopping Mad” (1938) and Clark Gable in “Kiss Me Kanga” (1940). She was made a Dame for services to the theatre in the 1946 New Year Honours list.

Fortune was less kind to Roo. Always in his mother’s shadow and typecast by his first role, he turned to drink and became a recluse. By the time Kanga died in 1959 Roo’s slender grip on reality had weakened. He had come to worship her, hording her belongings in his chaotic Belgravia flat.

After Roo’s death in 1987 the artefacts shown here were found amongst his possessions.

SH Sept 20th
I’ve decided on a box to present Kanga’s mementos. I’ve also started making her artefacts and have decided to use only materials that I already have, scraps of old lace, muslin, paper that have been around for years and even stuff that belonged to my mother. In a kind of way, I’m working with my mother in mind. She died nearly four years ago and for many reasons I’m still coming to terms with her death. She was hardly a grand dame of the theatre, but she was one in her own world and certainly no less of a presence than Kanga. So I’m making Kanga’s things with the care that I would have made them for my mother who loved and appreciated anything hand made – she passed on to me many of the skills that came from her and her family.