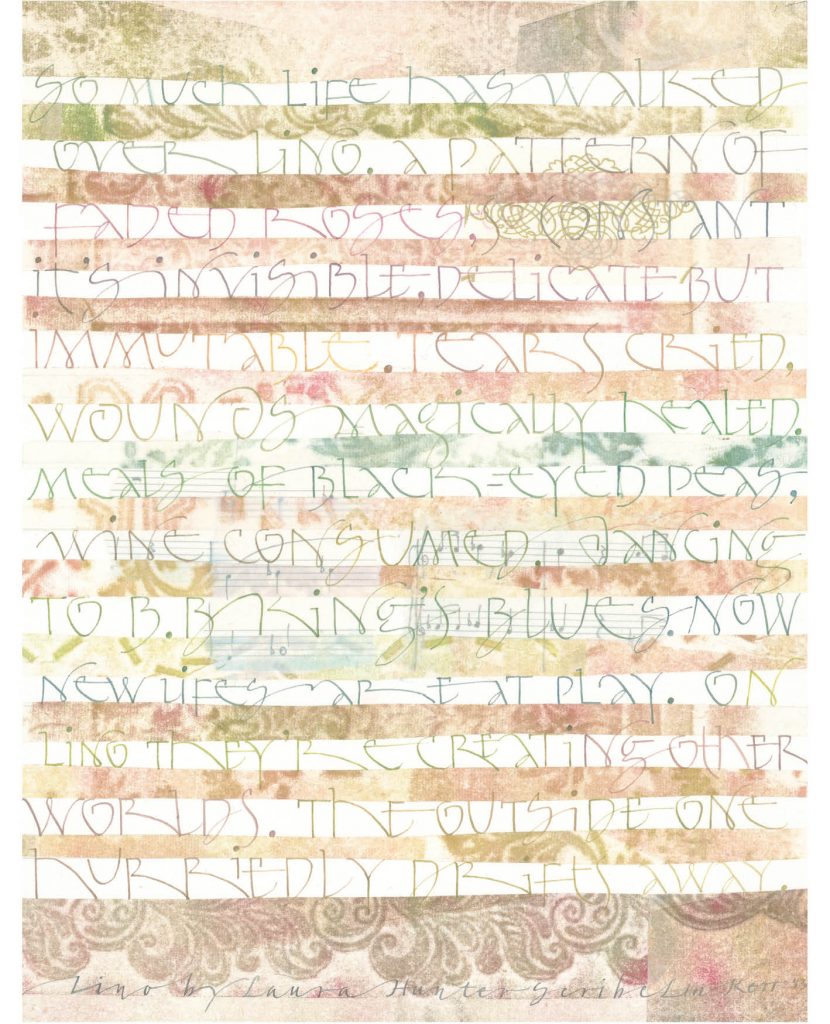 On a warm evening in the depths of the Betsey Trotwood, two strangers – Lin and I – approached the OED. I was nervous. And it wasn’t because of the huge carving knife we were both holding. What word would we have to play with for the next several months? Would it be loaded with connotation? A beautiful word that would set our imaginations running wild? Maybe a word we’d never heard of with an obscure etymology…

A wild stab into the dictionary and our word was revealed: Lino, short for linoleum.

Lin and I decided to get to know each other before we tackled our word. After several email exchanges, we started talking about lino. Our initial reactions were quite different. Mine was very personal and Lin’s more aesthetic, but we did both associate lino with flooring. In fact, when our word was revealed at the Betsey, my nana’s kitchen came straight to mind. She’s had the same lino flooring for as long as I can remember.

After a few weeks and several Google searches later, I scribbled allusions and possibilities into my notebook:

A covering. Making something unsightly beautiful.  A façade of decadence. A performance, illusion, untruth.
Durable. Permanent.
An artist’s canvas. Lines. Making a mark. Expression.
Pattern. The Yellow Wallpaper, Charlotte Perkins Gilman: “I never saw so much expression in an inanimate thing before.”
My nana’s kitchen.

I mulled over the word again and again but kept coming back to the same place. Our brief asked, “What does your word mean to you?” Not for want of trying, I couldn’t escape my own memory. So I went with it.

The lino in my nana’s house is a constant; a permanent feature that my family have walked over for generations. It was a stage for the games we played as children. The dance floor at family parties. It’s the antitheses of the outside world, which is constantly changing. Life comes and goes but the lino is eternal. I can see the pattern vividly now, but had we not randomly picked out lino that night at the Betsey, I doubt I would ever have thought about it.

So much life has walked over lino.
A pattern of faded roses,
So constant it’s invisible,
Delicate but immutable.

Now new lives are at play.
On lino they’re creating other worlds,
The outside one hurriedly,
Drifts,
Away.

I love the way Lin’s represented the words visually. The layers and textures match the words perfectly. My memories look like they’re hidden or buried beneath the pattern, which before this collaboration, they were.

When Laura and I thrust that great big carving knife into the Shorter Oxford English Dictionary and got lino, I thought: “Oh cool, I can do a linocut and I’m sure Laura will love writing about the process of linocutting!”

We began emailing, made friends and eventually broached the word lino.

Here are two of our associations:

Lin: Old-fashioned houses with truly dreadful lino with patterned roses, in grunge colours, designed not to show the dirt.

Laura: My nana’s kitchen floor. I remember the feel of it underfoot really distinctly. It’s a tiny kitchen that’s had a lot of footfall over the decades. People coming and going, children growing and moving on and then coming back with the next generation. But the floor remains. Hopefully, still not showing the dirt!

I still hoped that Laura would be inspired by trying out linocutting and visiting the Printmaker’s Studio. She made a truly valiant effort, even travelling from London to Oxford. But ‘nana’s kitchen floor’ won. You can tell from our responses that we have come from opposite ends of the spectrum – I never knew my grandmother and my feelings about lino are entirely aesthetic (or not?)

My visual response to the poem: I wanted pattern to play a prominent part in the design – an overlaying of patterns; the patina of faded roses, the inner life of the floor and the patterned texture of the lettering.

I feel that in a collaboration like this, the artwork should reflect both creators.

I started by screenprinting half-tone roses onto patterned Nepalese Lokta paper and overlaid this with naïve hand drawn versals but on completion didn’t relate to the result. Then I made up another photoscreen of a loopy, cursive all-over lettering design to print over the roses. Two roughs later with yet another lettering style, I abandoned screenprinting and the roses!

Laura has been accommodating and allowed me to ‘mess with the layout’ in order to achieve a textural pattern of lettering. I didn’t do this in the initial piece, which had neat lines of writing and margins all round. The final piece is not instantly legible, but I feel that it’s good for the viewer to do a little work too, and by slowing the reading it enables the viewer to savour the words and enjoy the patterns.

I created a background by monoprinting Chinese rice tissue with patterns – a sort of ink rubbing from woodblocks and embossed papers created using a roller and oil paints. I cut this into strips and glued it to the background. I sized the background and using a fine monoline nib, I wrote the poem legibly in watercolours to echo the pattern colours and create the feeling of an all-over pattern. Or a well-walked-over floor with a legacy!

I hope that Laura will feel that I’ve done justice to her poem and that my work will add another layer of meaning for the viewer/reader. Thank you Laura for being such an excellent collaborator.