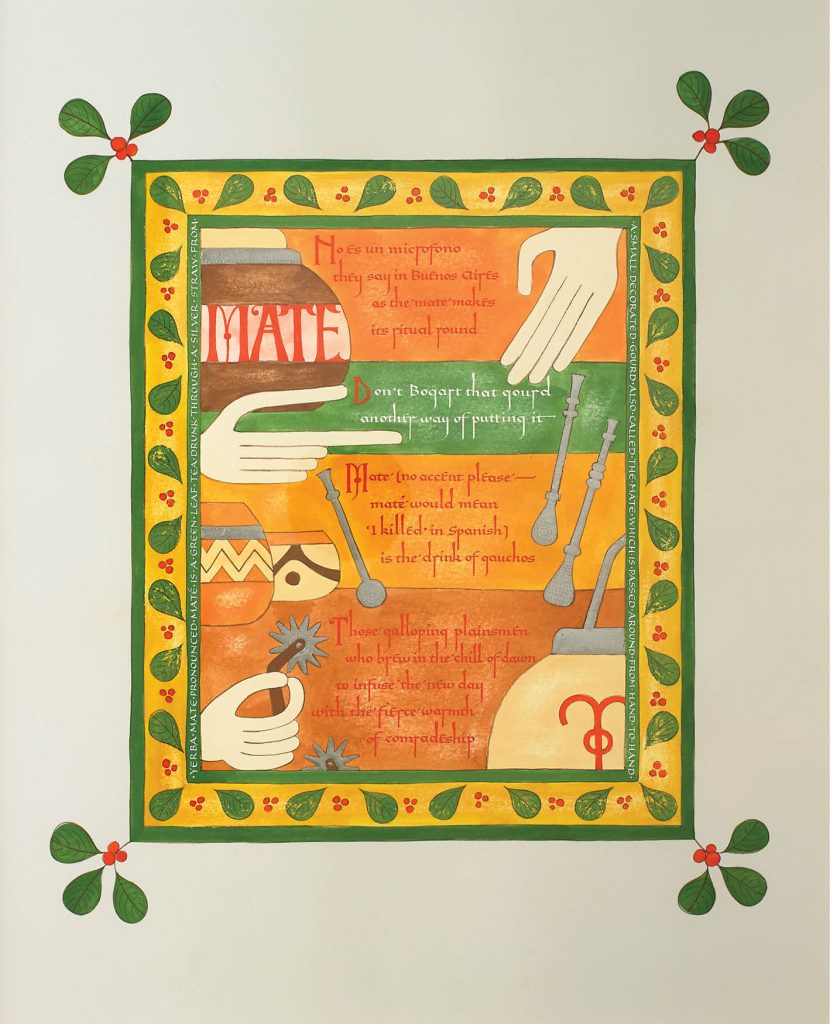 Serendipity can be a great spur to creativity – and this is a tale of serendipity.

My partner, Susie, is a calligrapher and artist of rare talent. A quick glance at her website was enough to tell me that this collaboration was going to be exciting, for me at any rate. Not so our word, Mate – unpromisingly short, flat-sounding and limited in meaning (if rich in sentimental potential), or so we agreed in our first exchange of emails.

Susie lives in Edinburgh. We met on a sunny, blustery day in early May and I suggested a walk to get our imaginations going. We strolled down to the Botanical Gardens, admiring the early blossom as we explored all the possible meanings of Mate. Perhaps it was the surroundings, but I began to think about a different kind of Mate, yerba mate (pronounced maté), the green tea drunk widely in South America.

I had tried it myself many years ago in Argentina and found it horribly bitter. But I’d been fascinated by the small decorated calabashes in which it’s brewed, and the silver straws through which it’s drunk, as well as the whole ritual of preparation and drinking – the gourd, also called the mate, being passed from one person to the next and back again to the master of ceremonies for frequent replenishment.

I mentioned this to Susie as we walked, explaining that it had a particular resonance for me because a relative had gone out to Argentina as a young man in the 1870s and ended up living and riding with the cowboys, the gauchos, for a number of years.

‘Sounds like old whatsisname,’ said Susie, ‘the one who was a writer and politician— ’

‘That’s who I’m talking about. My great-great uncle. You know about him?’

‘The one who’s buried on Inchmahome?’

Inchmahome is an island in the Lake of Menteith, a few miles west of Stirling. My family have a deep connection with the island, on which stand the ruins of a medieval priory, a place of great beauty and extraordinary tranquillity. It’s the resting place not only of my great-great uncle and his wife but also of my grandparents, all buried under the open sky in the chancel of the roofless priory church.

Susie had an odd look on her face. ‘That’s extraordinary. A relative of mine used to own the island, Stewart of Inchmahome. If I changed my name I could use the title – but friends joke and call me The Lady of the Lake!’

We grinned at each other. We had our theme. And Susie, this artist I had never met until that day, and I were mates in a way we could never have expected.

Once home I wrote the first draft of a 62-word poem (a sestude) about the comradeship of the gauchos, brewing up their mate in the early dawn, as my great-great uncle had so often described in his writing. I sent it off to Susie.

I got back from the Botanics that day and announced to my husband that Jamie and I had successfully Mated. Well, it is an extraordinary coincidence about Inchmahome.

The idea of interpreting Mate as mate really appealed to me. I drink Chinese green tea every day but I know nothing of mate and the ritual surrounding it. Thank goodness for Google Images: I could see the green holly-like plant with its brilliant red berries, the chunky mate gourds with their abstract patterns and silver rims, and the silver straws or bombillas.

Everything Spanish and South American is a mystery to me. That goes for Spanish lettering and art too. But then I remembered some early Spanish manuscript illuminations I had seen in a book …

Edinburgh’s Fine Art Library still had it. Phew! I could even borrow it. That got me going: all these brightly coloured, highly decorative early medieval illuminations with their stylised figures who all have enormous, cartoon-like hands with long spindly fingers. Why? I have no idea, but to me they seemed a perfect way to suggest the camaraderie involved in drinking mate.

My head began to fill with a Spanish-style illuminated page, perhaps slightly tongue in cheek. Most of the medieval manuscripts in the book had the same style of writing, a small Carolingian miniscule with tall ascenders. There were some funky decorative caps too, all done quite spontaneously and not ‘neat’. And most of the manuscript pages were rather worn and scuffed looking.

Several sketches later I had the basis of a page: the characteristic striped background strewn with an exuberant hotch-potch of mate utensils, Jamie’s lovely words nestling in among them. I would even go mad and make the bombillas and gourd rims real silver – well Palladium, as that doesn’t tarnish.

Jamie was keen also to include a brief definition of mate. When I picked up a small nib and wrote this in the inner margin of the illumination it fitted precisely first time round. I was on the right track. Paper, paint and colour trials followed before I could send Jamie a rough.

Jamie approved: ‘I love what you’ve done … it’s beautiful and a perfect fit with the words’. He asked if we might include a pair of spurs and Robert Cunninghame Graham’s horse brand. More silver for the spurs, and I put the brand on one of the gourds.

Throughout August I set about producing three copies of the work. I always like working on more than one for safety. Also it’s like cooking for the freezer – while you have the paint mixed you might as well do two or three. And we need multiples for the exhibition anyway, so my multiples will be originals.

So I painted away, systematically, between Book Festival events, late nights at the theatre and breakfast with house guests. The scariest bit was having to write the words on top of hours and hours of painting …