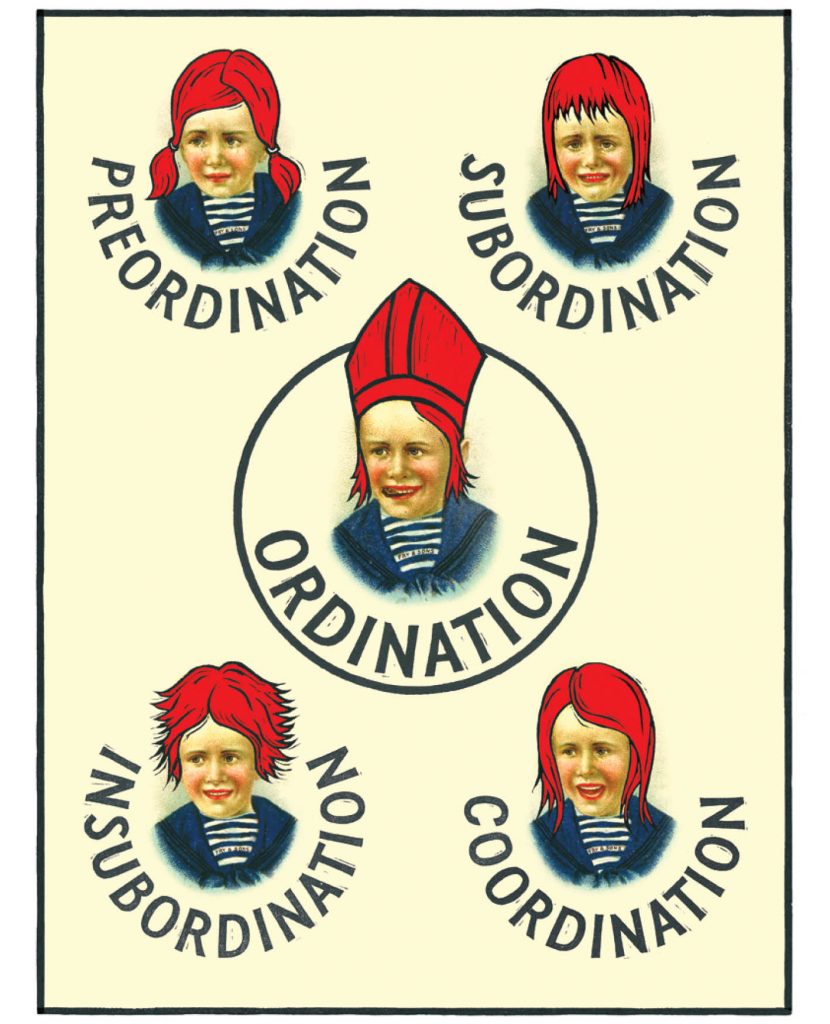 If there’s one phrase tattooed on every screenwriter’s heart, it’s: ‘show, don’t tell’. So I wasn’t about to produce a piece of deathless prose for Tom to gussy up. Whatever we came up with together, it had to embody our given word in some way or other.

Only trouble was, our given word. The ‘O’ section of the dictionary is stuffed full of promise (Ogling! Orgasm! Owls!). But it was not to be. The butcher’s knife sliced right through the fun stuff and served us up… ordination.

The problem being…? Well, firstly, ordination is that slippery customer, an abstract noun. The enemy of brevity and clarity and poetry too.

And secondly… remind me what it means again, exactly?

First: the ordering or ranking of stuff.
Second: the appointment of someone to conduct religious rites.
Third: something mathematical, problematical and frankly incomprehensible.

The last one I could forgive myself for blanking out (and I did), but the other two still felt like strangers. Ordination comes into focus only when you glue a prefix on the front (co-ordination; subordination) or when you convert it back to a verb (preordained).

But ordination itself? My eyes glazed over.

Like a cat with a rather tired mouse, I played gamely with the first definition (‘ranking in order’) and with ways of graphically representing the meanings of the various compound words (subordination, co-ordination, insubordination…).

The first thing that struck me was how vivid these compound words were compared to their root. It dawned on me that this wasn’t just about their familiarity to the ear.

They’re vivid because they’re human – all about humans shoving up against other humans – pressing down, fighting back, joining forces…

And I wondered why all this was reminding me of the second, religious definition of ordination? Then I remembered that very human battlefield: the church’s bitter trench warfare over the ordination of women.

Well, the nearest I got to church as a kid was watching ‘Songs of Praise’, so tussles over the right to conduct holy rites wouldn’t normally make me salivate. But this was a meaty subject dripping with delicious ironies.

Other developments too were making me lick my lips. By this point Tom was on board bringing tidings of great joy: lino cutting was in the offing! What better?

Chunky and childlike – the stuff of Russian fables and agit-prop posters. I started thinking of lino-cut letters as a kind of punk graffiti over a photographic black and white image. But of what?

The twisting alleyways of the interweb led me to nothing less graphic than the Papal Testicle Testing Chair. (Do look it up, children.) This charmless item of furniture, still in the Vatican, looks like – well, frankly, it looks like a commode. It was reputedly designed to facilitate a discreet feel-up to check on the gender of the pope-to-be in case a woman was mistakenly selected.

As a blunt symbol of the sexism of the Catholic church, I fell in love with it. I felt sure that Tom’s gutsy lino-cut letters would print brilliantly over this grainy black and white image to form punchy agit-prop anagrams, and – and –

Tom didn’t take to this gleefully childish feminist joke as much as I did, pointing out among other things that it’s not just the Catholic church that’s got a problem with women priests (and isn’t is annoying when other people are right?).

Anyway, he was more interested in the other definition of ‘ordination’ – i.e: the ranking of stuff. Belatedly I applied the brakes and pulled over. Tom grabbed the prefixes and ran with them, scattering idea after great idea. I got enthused all over again and we ploughed on, fuelled by coffee.

But something of the silliness must have stuck, because while we were musing (okay, dithering) something happened: both meanings of the word suddenly slid together as Tom moved in with a sly new take on the joke – a version of the famous Fry’s Five Boys chocolate bar, and its curious list of abstract nouns: ‘desperation, pacification, expectation, acclamation, realization’.

Now this was smart. Because, oddly, this five-word set pretty much sums up the state of play for wannabe women priests. Here goes (deep breath): it’s pre-ordained that women cannot be ordained and must be subordinated within the church; to get what they want, these women must practise insubordination and join forces to coordinate their efforts – resulting, hopefully, in… ordination!

Phew. Tom had finally dragged both definitions of the word screaming to the page and nailed them to an idea before they could wriggle away.

And as for those strange faces – those five gurning Edwardian boys and not a girl in sight? Surely that didn’t exactly embody our idea of female equality?

Tom insisted it was nothing that a sharp lino knife and a pot of orange paint couldn’t fix.

Boys will be girls… and priests too, one fine day.