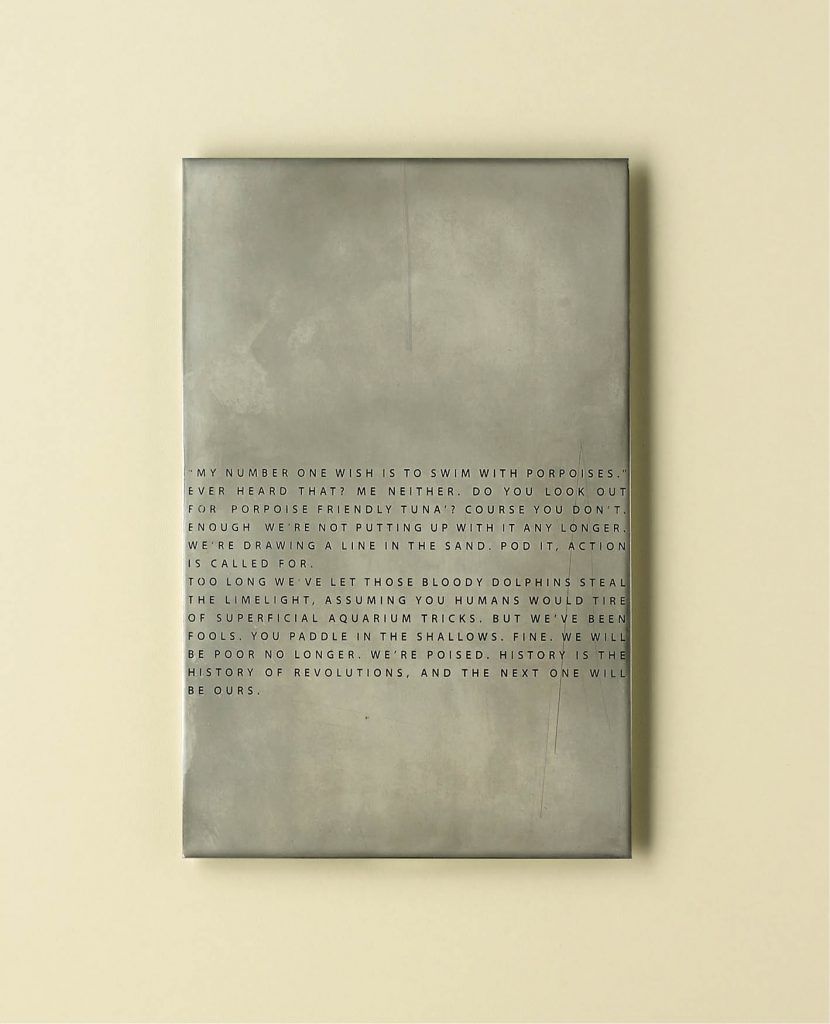 It’s been a leisurely seven weeks or so since the ceremonial knifing of the Shorter Oxford yielded the word ‘porpoise’ to Giles and myself. There’s been a scattering of emails between us, mostly to arrange a convenient date to meet, but no particular urgency.

In a similarly relaxed fashion, we amble along from Marylebone and find a half empty middle-eastern cafe that is happy to serve us a moderately appetising panini and mug of hot coffee. Having not met at the word allocation evening, or indeed ever before, we spend at least as much time simply getting to know each other as we do discussing the project.

In the seven weeks we’ve had to mull this over, I confess to Giles that I’ve had precisely one idea about porpoise so far. Being a gentleman, he makes some very pleasant noises about it, by which I mean nice words, not echolocation clicks, which admittedly would have been even more impressive.  I warn him that I’m bound to try and work some dire puns out of my system, such as ‘thinking to no porpoise’, which he appears to take in his stride, although he does carefully point out that I need to think about writing no more than about 80 words if the engraving or carving isn’t to become a bigger job than taking on Arlington cemetery.  This may have been his urbane way of keeping a check on unnecessary verbiage.

I should say at this point that my big (OK only) idea is based on porpoises being a poor relation to the more charismatic dolphins, to the point where they are more or less invisible in popular culture. By a sweet irony, as I travel back home from seeing Giles, I finish the novel I’ve been reading, which is Trawl by B.S. Johnson. On he final page, I read the following:

Duff pummels me on the point of my shoulder, points as I round on him, and I see a porpoise mimicking the waves’ shape on this calm sea. You can tell it isn’t a dolphin because it hasn’t got a long beak, says Duff.”

Hah! That old strange phenomenon – you hear nothing about porpoises from one year to the next, and suddenly they’re everywhere…

Our collaboration bowls along with the same ease that our first meeting did. I write about five different versions, all variants around the theme of our peeved porpoise, who is by turns maudlin, chippy, angry and finally in revolutionary fervor.  Giles makes enthusiastic but wise editorial comments, and before long, we’ve settled on a form of words that he is happy to work with. The baton passes to him. I’m loving this – creative collaboration has never been so smooth.

It’s great working with Martin. He knows exactly what he’s doing. I like his take for a gruff and grouchy individual. The big question for me is: how do the grumbles of an anonymous porpoise end up carved or etched into a material? I mean, it’s not like porpoises can write or anything: how do we make that leap?

In the museum there are some fantastic clay tablets: pillows of clay stamped side-to-side with cuneiform text, five thousand year-old lists of sheep and grain yields. I can’t read them but I love the texture, the pattern of the glyphs pressed into the clay one after another. Other texts are categorised as ‘lexical’, ‘administrative’, ‘royal and monumental’. Texts carved in stone, chased in metal, pressed into clay or scratched into wax tablets:  inscriptions stored in the record office of an empire or sent out to the frontiers and set-up to say what’s what.

The ambitions and lists of administrators and rulers. Then it hits me: they’re just like the grouch of our porpoise. I mean, each inscription a record of intention with the inevitability of frustration. Even the ‘administrative lists’ point to a desire to stay in control and keep on top of things. Vanity of vanities: all is vanity, as someone once said.

So this is it: a stainless steel tablet, made in a workshop on the Essex coastal marshes; not shiny, more kitchen sink stainless, dull and scuffed, the letters planted widely, and with it a rubbing made with wax, the record of a record.