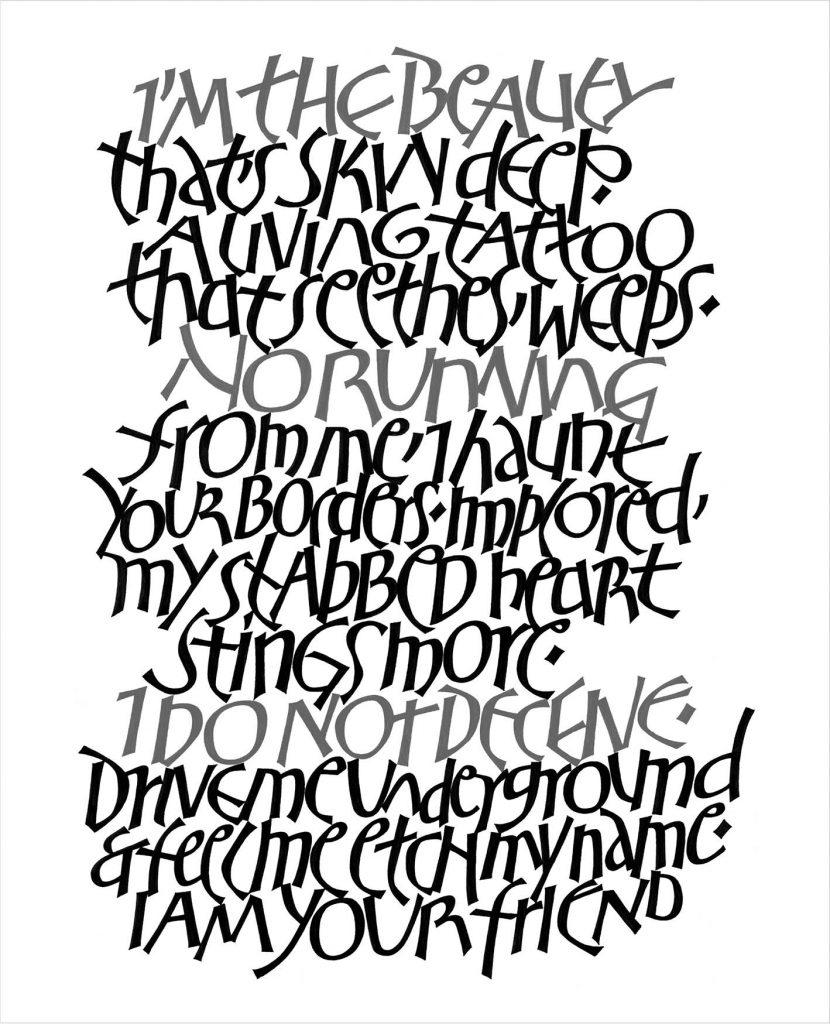 The story according to Tamara

In the beginning was the Word.

And the Word was: rash.

And Tamara did look upon John, and John upon Tamara, and they said unto each other, We know not what to make of this Word.

And they saw that this was all good, for they did know each other, not even unto the biblical sense, but having met in the city of Man-chester, in the time of the Magi of Thatcher.

And they went forth from the Betsey Trotwood, and pondered these things in their hearts.

And John was clothed with camel’s hair, and with a girdle of a skin about his loins;  and he did eat locally sourced locusts and wild honey. She whose name was Tamar, almost, was a woman of a fair countenance.

And the days were accomplished that Tamara should be delivered of the Word. This she offered unto John, saying, Behold, my piece I give unto you.

And John saw that it was good, but not entirely pleasing unto him.

And it is said that Tamara was in no wise vexed, but did take counsel from this John, and returned with gladness to her travail. And did deliver versions even unto the second and third generation.

Then did John take up his instrument and carve the letters of the Word, unto many versions also.

And when Tamara saw them, she cast in her mind what manner of interpretation this should be. For the works of John passeth literal understanding.

But in the fullness of times she did come to know them, and to marvel.

And they did offer the service of their work unto the elders of 26 and Letter Exchange, with much rejoicing.

Saying, By our fruits ye shall know us.

The story according to John

Some loin-girded ponderings from the fastnesses of Cambria, translated into modern English.

As a lettercarver in stone, I am used to producing one-off pieces. But the idea of copies has always interested me – indeed, the requirement to produce ‘multiples’ was one of the attractions of taking part in this exhibition. Could I carve something and make plaster casts? Or if the piece wasn’t to be carved, perhaps use screen printing or lino cutting or some other interesting kind of hand print making? In the event, the usual pressure of other work and resultant shortness of time forced me into something less ambitious and more dependent on mysterious high technology: reproduction by giclée print from scans of some kind of original. I have a local printer who is an expert at this.

But how to make the original? After several attempts at direct calligraphy with pen and ink I switched to felt-tips on layout paper, with one of the calligraphic trials underneath as a rough guide. The finished piece was done the same way: built up pretty directly – in as few strokes as possible and without pencil guidelines – with black felt-tips (which I find very congenial tools, being somewhere between a pen and a brush) on layout paper. As I was then going to scan it, I could have done all kinds of manipulation and touching up afterwards in Photoshop, but decided to restrict Photoshop tasks to some tonal adjustment and erasing of dust marks. So the result has all the irregularity, wobbly edges and variations of black of the felt-tip original; a bit like a warts-and-all live recording of music. That’s my excuse anyway.

The composition of the piece attempts to achieve a suitable ‘voice’ for the text, with appropriate emphasis, without the letterforms illustrating the meaning of the words in too trite a way. Tamara’s original has three stanzas, indicated in my rendition by their first lines being in grey. This kind of visual treatment slows reading down: it’s not the same as a typeset version designed for clarity. The way the words intertwine – being brought physically close – perhaps emphasises the paradoxes in the poem, and the repeated but varying shapes of letters may do something visually akin to the verbal rhythms and assonances, again without following them literally.