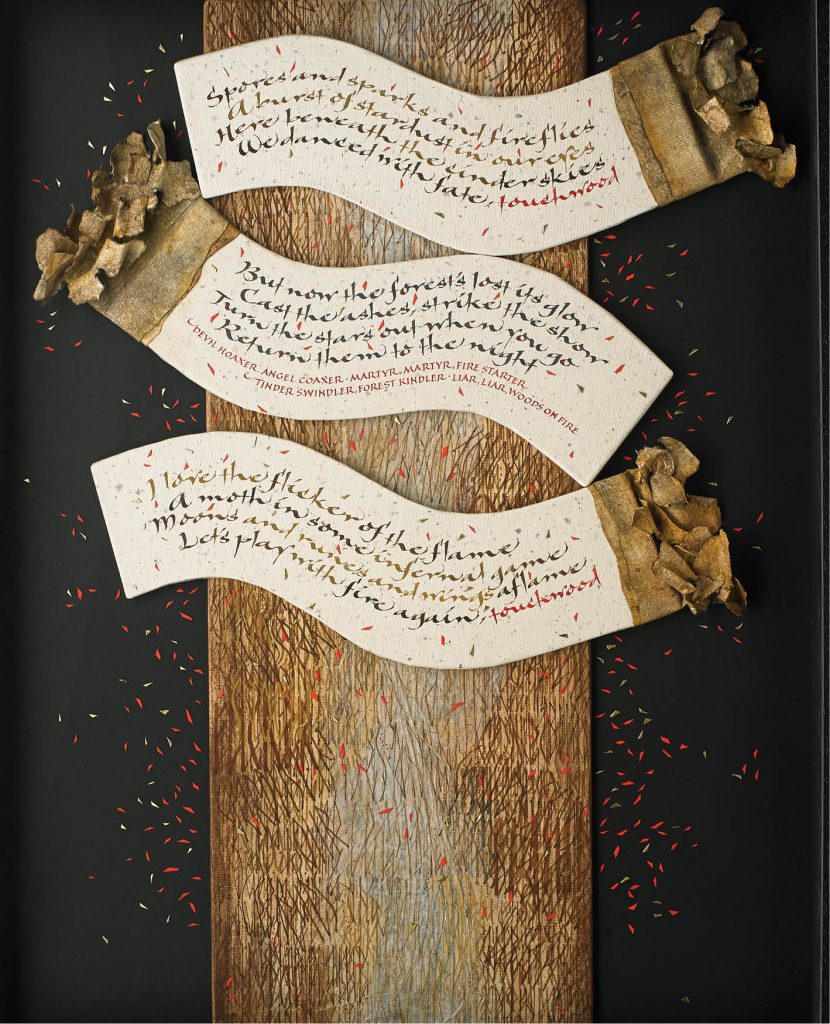 In 1991, two German hikers discover the frozen corpse of a Stone Age man in the Schnalstal Glacier in the Tyrolean Alps. Together with the mummified remains of the iceman, nicknamed Ötzi, is a pouch containing his tinder – the fire-starter mushroom colloquially known as ‘touchwood’.

5,000 years after Ötzi, we find two Late Hominids exchanging ideas in a noisy cave beneath The Betsey Trotwood pub. For now, let’s just call them Forager Woman and Barbecue Man.

“What if we made it out of touchwood?”
“Or burnt out driftwood.”
“Something tactile.”
“Or superstitious.”
“Like touching the cross of Christ.”
“Darkness and light.”
“A murder story.”
“Written in liquid fungus ink!”

In the months that follow, the two of them will continue like this, layering idea upon idea.

Forager Woman – Ros Pritchard – has found an outcrop of bracket fungus on a local tree stump. In the interests of science, she allows this to decompose slowly on a sheet of paper. It smells mushroomy.

A former medical illustrator, Ros also takes a forensic interest in handwriting through the ages. Her unusual skill has led to film and TV work as a kind of Stanislavsky Method calligrapher. Many a plot has turned on the authenticity of her letters, from Dangerous Liaisons to Pride and Prejudice.

Back in the studio she is preoccupied with the letter T. Her sketches describe a 3-D version of the letter, covered in writing, set in a box lined with images and layered text.

Touchwood: the common name of the fungus Fomes fomentarius, meaning ‘material to feed a fire’. Used surgically to staunch bleeding, yet fatal to trees, turning their hearts white in death.

“Touch wood”: an ancient superstition to avert bad luck, based on the pagan belief that evil spirits live in wood. Also the favourite phrase of cab drivers everywhere, often accompanied by a comedy head-touching reflex.

Ros suggests the way to bind all of these definitions together is to use a tree as the central motif: “A source of spiritual and fleshly power, able to alter our fate.”

Dan is trying to write in Kennings – these are figurative compound phrases used cryptically by the Old Norse poets. For example, instead of “Fire!” they say, “Sun Of The House!”

Dan makes a complete Dinner Of The Dog of this. All he has to show for his efforts are some childish riddle-rhymes.

In any project, there comes a point when the emptiness of a blank canvas becomes unbearable. Here, the extra pressure of 50 peers making masterpieces only adds to Dan’s paralysis.

Ros needs words! Waiting for text to arrive she begins to panic.

Then it happens. While lighting a fire beneath some al fresco Tesco burgers, Barbecue Man becomes mesmerised by the flames. He feels really primitive. Like Ötzi. This will be his theme – playing with fire.

But what form should the words take? If he had been paired with a stonemason, he might well have settled for a monumental one-liner.

But the handwriting talents of Ros encourage Dan to be more intimate and confessional in his writing: “Why am I drawn to a flame? Why do I seek the thrill of danger? Am I doomed to repeat my mistakes over and over again?” The draft writes itself – three verses of lyrics in search of a song.

With words to spark her, Ros is inspired again. Defying superstition, she experiments with Runes. These twig-like letter forms evoke pagan times, when malevolent spirits lurked in every tree. The cumulative effect of these simple, scored lines is a curiously bark-like texture.

Dan returns from Glastonbury Festival with music still reverberating around his head and begins to compose. He finds that putting his words to music forces simplification. A restless chorus of dissonant voices suggests itself between verses. And with the help of his 17 year-old son Fred as producer, his ‘dance with fate’ begins to sound like Primeval Dubstep.

The seagulls are panting on the glorious day Dan comes to visit Ros at her home and studio in Lyme Regis. After tea in the garden, Ros reveals her hand.

There’s a high risk factor in the way Ros likes to work. While she can imagine the outcome in her mind’s eye, right now everything is in experimental pieces.

She is battling against the squareness of the frame by narrowing the composition with a central ‘tree’ board, onto which she plans to add layers of Runic writing to form a woody texture. For legibility, the words will be lifted onto another plane on curved verse boards. Ros is covering these herself using a meticulous technique learned from a bookbinder. The result will be a more tolerant surface than paper, but after all the days of preparation this also brings an extra frisson of danger to the act of writing.

The shape of the boards demands a wide Italic letterform, adding movement. And the undulating quality accentuates both the flow of the words and the structure of the fungus. Across the studio, another experiment recreates the greys, browns and ochres of Fomes fomentarius.

“There are times when I look at all this, and wonder what on earth I’m doing, and whether it will ever hang together,” says Ros. “ So it helps to hear your take on things.”

Ros and Dan have become friends through a random word. They walk and talk excitedly around Lyme Regis, visiting the now-desiccated outcrop of bracket fungus.

As Autumn nips, Touchwood takes on a life of its own.

Every trial brings a new thrill: the sculpted fungal edges of the verse boards; the midnight frame; the magical gilding.

Their collaboration has been illuminated by these spores and sparks of ideas, layered and incorporated. From death and decay has come fire and life. 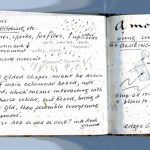 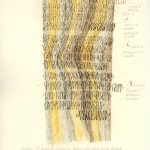 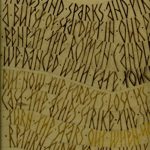 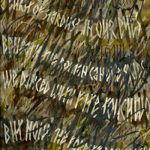 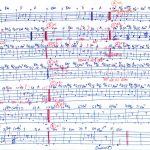 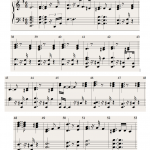 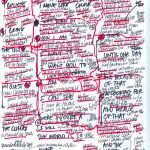