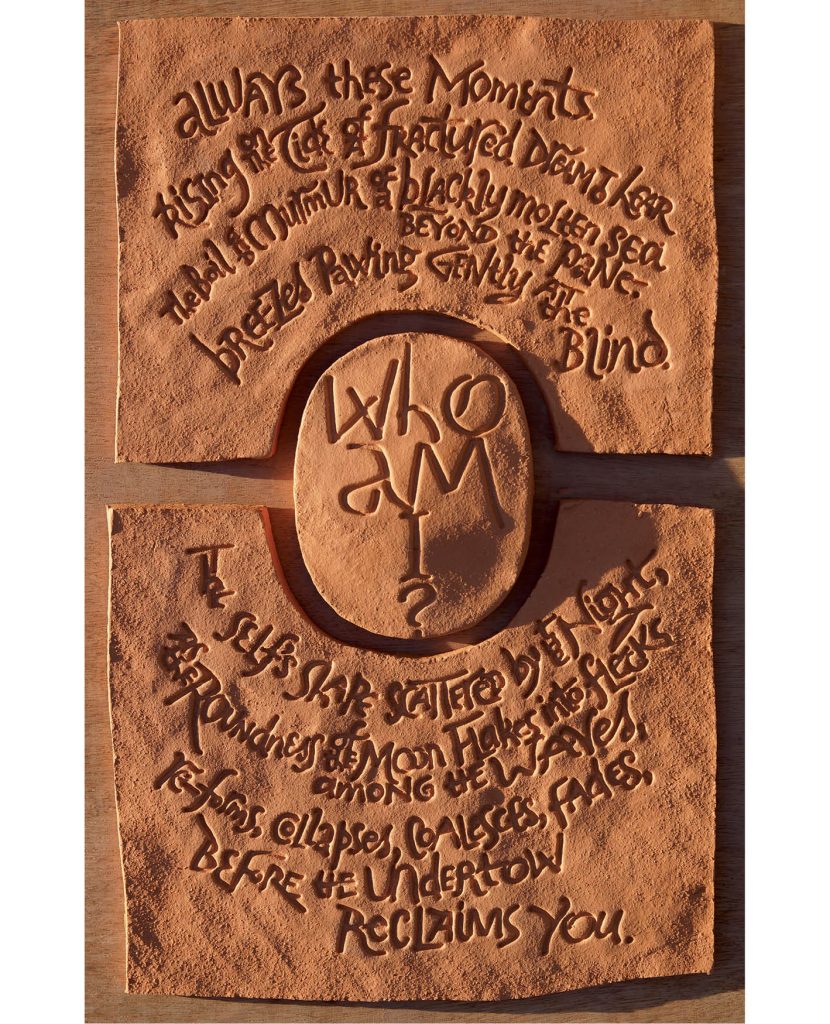 Intro to both stories
Sadly, we hardly met during this process, both being frenetically busy on a variety of things. There was a brief hello and a handshake at the Private View for Stephen’s show, Was It For This The Clay Grew Tall?, but that was all. Our creation stories mirror the process: we’ve both been way too busy to collaborate on these either, so they’re two perspectives on the same project.

Stephen
It’s not surprising that original drafts of writing by the great and good are keenly sought after.

Of late, I have spent a few years looking at the manuscripts of Wilfred Owen, made as he forged the words for his poems. They are a window into his creative thinking. As we don’t have a recording of his actual voice, it’s the nearest we are going to get – contradictory though it may be, it’s a sort of ‘visible voice’!

For Mike’s writing I wanted to reflect a bit of his creative process by making it ‘human’. The process of setting words in type is one that distances the link between the original and the read. Sometimes typography can suck the very life from language.

So, my wobbly lettering is where I started. But I too have a built-in contradiction: my casual calligraphy has been outlined in a sophisticated computer programme, made into polymer sheets and then pressed into wet clay. After waiting a few days for it to dry, it has then been fired in a kiln. How ‘non-casual’ can you get?

In all this, I am reminded of the effort of the Sumerian cuneiform writers, who did the same thing millennia ago – delighting in the way that language can even be made into little bits of sculpture. Mike’s words may well speak to someone in a few thousand years’ time!

Mike
I find I don’t want to tell too much of the story behind this piece. Hopefully it tells its own story. If it doesn’t, no amount of attempted shoring-up by me here can save it.

I felt a considerable fraud writing the poem – and still do, really. My technical knowledge of poetic forms is limited at best, as is my experience of using them. It’s no false modesty to describe ‘Undulate’ as an amateur piece.

So why attempt a poem at all? Well, in the end, why not? There’s little to be truly lost, beyond a bit of face. And a man’s reach should his exceed his grasp, and all that.

Mind you, there was Stephen to think about. We’d talked about meeting up, but both of us proved too busy (we also live quite far apart). So with time ticking away we agreed to keep things simple: I’d write some words and pass them to him to interpret. Stephen usually works like this anyway, from what I can tell.

The thing is, he’s also used to working with exceptional words. The only time we met was when Stephen kindly invited me to the Private View of his (stunning) show, Was It For This The Clay Grew Tall?, in which Stephen used the words of Wilfred Owen and Britten’s Requiem Mass. He’s also worked extensively with the current Poet Laureate, Carol Ann Duffy. So it was impossible not to feel that I’d strayed into some sort of writers’ VIP lounge, bearing precisely none of the requisite credentials.

Plus, Stephen’s work is beautiful. His talent, dedication and experience are obvious in every piece. I had to give him something that at least attempted to be worthy of his time and gifts. No pressure.

At the same time, though, I had to submit something. The brute buffers of a deadline up ahead always provide useful focus: I just had to get on with it. By the time I felt I’d finished, I felt like the poem had enough going for it at least to show it to Stephen. He liked it, thank goodness, and as I write this I’m extremely excited to see what he’s made of it. It’s a genuine honour to have him work with my words.