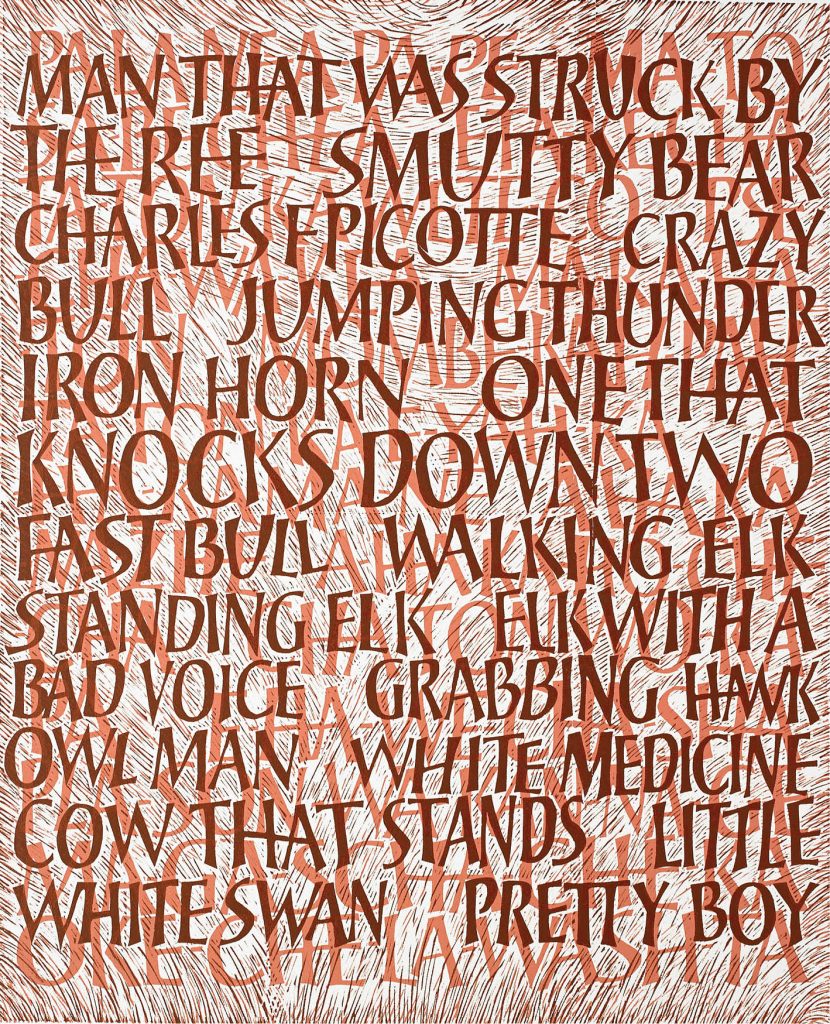 (The following conversation never happened, but is based on real events.)

Why couldn’t the knife have landed on ‘yak’?

I have to write about a meat boner? Why’s Yankton even in the dictionary?

It’s named after a Sioux tribe, the Ihanktonwan. It means ‘from the end (village)’.

Well, that’s more interesting. We could do something about the Sioux.

I don’t think we can fully understand their culture well enough to fabricate prose or poetry for them, can we?

Have you seen their names though? They’re amazing.

Their first treaty with the Americans was signed by Smutty Bear, Struck by the Ree, Crazy Bull, One That Knocks Down Two, Walking Elk, Standing Elk, The Elk with the Bad Voice.

You’re given a name at a young age, it seems. They might be inspired by something that person was known for, or given in a ceremony after that person went on a ‘vision quest’. What they saw on their quest would be interpreted and inspire their name. Let’s use those!

There’s even a whole kind of radio programme about the Yankton Sioux online.

I think that not using the actual word is beneficial to the work as it means that the viewer will have to read more about the piece to understand the words’ relevance.

We should look at Sioux artwork if possible and that can give us an idea for style of lettering. Quite strong forms I’m thinking as, when I listened to the radio clip, there’s a definite sternness, so flouncy lettering just won’t do. What do you think? I’m not just trying to squirm out of calligraphy, though can’t see Struck by the Ree and Crazy Bear getting on with copperplate with extra flourishes. A linocut might be a good method to create the piece of work.

Coincidently Radio 4’s Today programme featured a piece on the great diversity of Native American tribes and the fact that many identifiable tribal languages are still spoken there. It explained that many of the fluent speakers are passing away so the knowledge of those languages is being lost.

I can go with the lettering on the treaty if you like and will start setting them out today, the untranslated layered with the translated I was thinking.

I don’t think we need the untranslated layer… I think it’ll be intriguing and mysterious to have these weird phrases in English and not know what the heck they are. And it might halve your workload! The current Yankton Sioux seem to usually go by the translated version of their names, anyway. What do you think?

I realise including them will increase the time needed to create the printing blocks but the untranslated names seem culturally important and visually beautiful with their small clusters of hyphenated letters and so I’m going to try incorporating them as well.

I think it would be a good idea to contact the Yankton Sioux reservation to see if they could add their comment on what the treaty means to them, positive or negative, because I think it would add more interest to the work.

I found the man to talk to, called Darrell E. Drapeau. He says many tribal members view that 1858 treaty as illegal. Members of the tribe were apparently coerced into signing (for instance, by being taken onto boats – people who’d never seen large bodies of water, this is – and threatened with being thrown in among monsters), and unlike other treaties, there were no minutes of the negotiations. It gave 11 million acres of land to the federal government, and 445,000 to the tribal members.

This is what Chief Struck by the Ree said: ‘The white men are coming like maggots. It is useless to resist them. They are many more than we are. We could not hope to stop them. Many of our brave warriors would be killed, our women and children left in sorrow, and still we would not stop them. We must accept it, get the best terms we can get and try to adopt their ways.’

What would the Daily Mail say about that?

I’d better get on with the printing. I’m going to leave the background of the lettering choppy but design it to create movement by cutting it into circular sweeps to hint at rings on a pool or swathes of grass.

I’m toying with the idea of using the colours of the Yankton Reservation flag which is striking in red and yellow but feel that they might be too overpowering. I’ve experimented with embossing the untranslated layer but can now see that the result isn’t clear enough especially when the finished piece would be behind glass and its legibility would be dependent on strong lighting. I’ll use two tones of an earthy hue. The finished piece will fit very tightly in the specified space, a kind of texture of lettering, a pattern of Yankton names.

Lovely. I’m not sure what I would have had to say about ‘yak’ anyway.