It was that rare thing, a fine summer’s day. ‘Perfect,’ Flora said. Ed thought it would never last, but he grabbed her small battered rucksack, and they headed down to the river. On the way they nipped into Sainsbury’s: cold, dry white wine for them, cheese straws and a Ribena for their young son, Sam.

Canbury Gardens was busy. Heaving with young people, old people, families and dogs. There were dozens of small groups spread out on checked picnic rugs. Others lounged on deck chairs: there were hairy legs, shaved legs, and veined legs, all exposed to the sun.

The river usually flowed fast here, helping the young rowers slice through the choppy water down towards Teddington Lock. But today it was slow and languid, taking it easy like everything else. No one needed to be anywhere, but everyone was here.

It was a Sunday afternoon and a brass band was playing. The scene was as English as Victoria Sponge, as jolly as a red-faced drunk at closing time. They spotted a space on the grass and tiptoed round an elderly couple. The pensioners were slumped on identical folding chairs: holding mottled hands, heads back, sunflowers sleeping.

The band started up. Testing notes, trumping – small flourishes that went nowhere. The conductor took control. He wore a straw boater with a starched white shirt and a rose red bow tie. His black trousers were shiny with perfect creases, his belt fighting a losing battle with his belly. He took a low bow. A teenage girl whooped, buoyed by blackcurrant cider. Her friends giggled. The conductor held his baton aloft, tapped his right foot three times, and the band launched into The Floral Dance.

Ed twisted off the top of their wine. Flora held up two plastic glasses, swaying them playfully, conducting him; tempting him to drip a drop on her new white top. Sam drank straight from the bottle, burped and hi-fived his dad. They sipped their wine. They smiled. They kissed each other full on the lips. A man in a Chelsea shirt smirked and told them to get a room. They carried on kissing, carried on drinking.

The band played on. Abide With Me merged into Amazing Grace. He closed his eyes and drifted away.

The band was still playing when he woke up. He had no idea how long he’d been asleep. He was on his own. He looked around for Sam. He couldn’t see him anywhere. He felt sick, paralysed by fear. He still hadn’t forgiven himself for losing Sam in The Bentall’s Centre when he was just four years old. They’d been in Waterstone’s where a local children’s author was reading from her latest book. Ed got bored and told Sam to stay put while he browsed around Sci-Fi and Crime. When he returned Sam had disappeared. Vanished out of thin air. Or had someone taken him? Ed found him playing on the escalators. He was happy, and only started crying when Ed shouted at him for wandering off.

This time, Sam was only a short distance away, with a friend’s parents, sucking on a cheese straw. The dad winked and gave Ed a thumbs-up.

He smiled. He was embarrassed, but most of all, relieved. He looked around for Flora. It didn’t take long. She was dancing in front of the bandstand. Doing that hippy dance she did when she was tipsy, not caring what anyone thought. It was the first thing that had attracted him to her. She was slight, otherworldly, and exotic. His mother called her Twiggy when they first met: she wasn’t being kind. There were just the two of them back then. But now there were three. He’d fallen asleep, but what was she doing? Dancing, not knowing or caring where Sam was.

She started working her way through the crowd. People cheered, but he felt a twist of shame swirling in his gut. She danced her way up the concrete ramp to the bandstand. The band carried on playing.

She held her slim arms up, stretching, trying to reach the apex of the stand. She spun around as she brought her arms down, faced the crowd and bowed, flinging her arms over the blue railings that encircled the stand. She was draped over three iron fish, Kingston’s coat of arms. She ran her hands suggestively across the top one, caressing its back and tail.

He’d had enough, stood up and beckoned her back. She caught his eye, lowered her head like a naughty schoolchild, and obediently marched back. She went to kiss him. But he noticed a small, almost imperceptible change in the way she looked at him, and turned his face away. He couldn’t put his finger on it at first. Later he thought she’d connected to a younger version of herself that she’d long since buried. He was the same plain old Ed. But she’d moved on somehow, or more to the point, moved back.

They decided to go, called for Sam, and walked back home. The boy held their hands and swung happily between them, oblivious to their long shadows pointing the way ahead.

It was a typical dull winter’s day. He was alone. Sam was with his mother.

He hunched up his shoulders and pulled his bobble hat down. It protected him from the bitter wind sweeping up the river. He felt tired and empty, and leaned against a gnarled, stubbly tree for support.

He wanted to rest but carried on. He stopped near the bandstand. It was deserted. He walked up the ramp. A cycle lock looped around the entrance gate and railings three times. It was old and rusted. He looked down at the floor. There was one small twig, thin and inconsequential. The wind lifted it momentarily. It did a little twist, its own merry dance, floated up towards the roof then floated back down again. He turned away, absentmindedly kicking the dry brown leaves as he shuffled along the river. 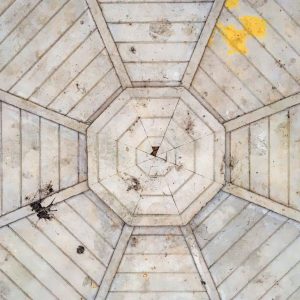 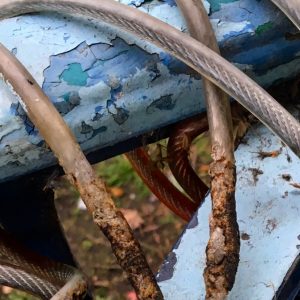 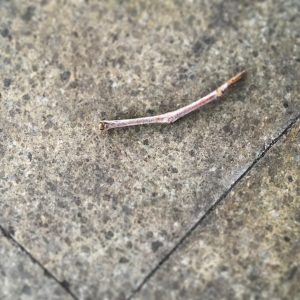