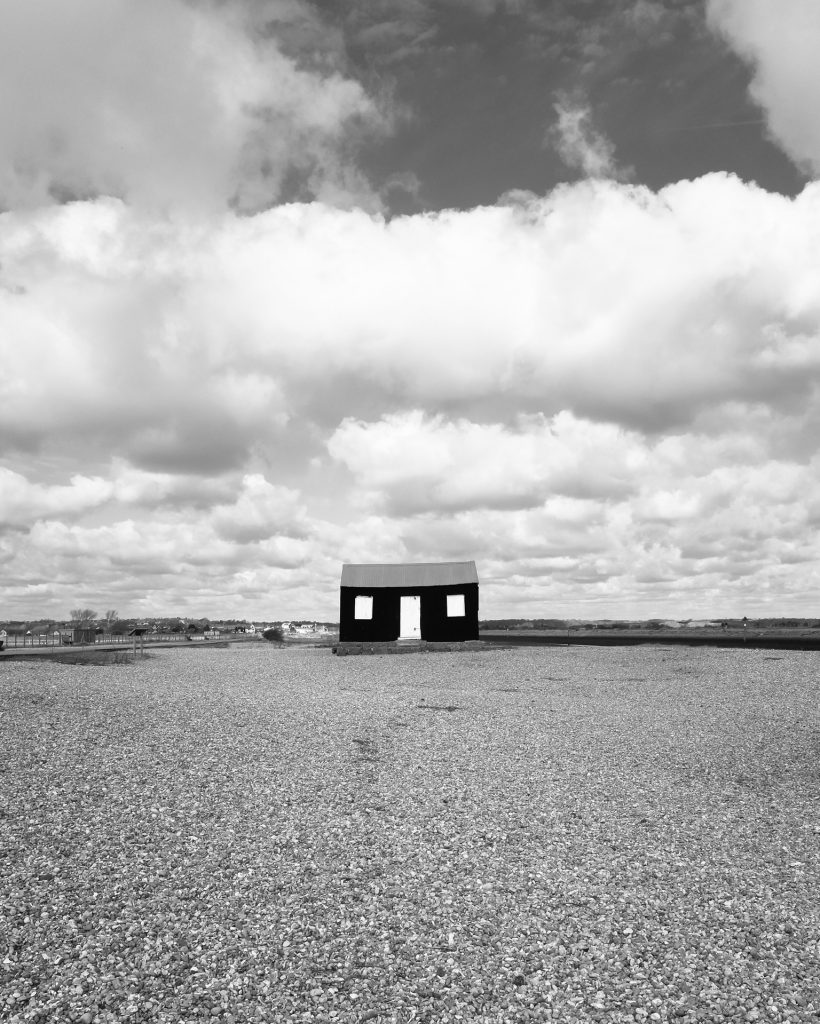 Mid tide and the sea keeps slipping away. A hard west wind blows cold from the cliffs at Fairlight over Pett Level and on to the nature reserve at Rye Harbour. Here the River Rother enters Rye Bay, at the far end of Camber Sands. Here fresh water meets salt water and the sea seems to boil. The Perigrina with her one-woman crew chugs from the calm of the river towards the shallow surf, then turns back, in fear of the tide, retreats into the river, then turns again to face the sea. She turns and turns, like a tired horse refusing a final jump.

The room smelt of cabbage and socks. The TV talked to itself all day high on the wall by the always drawn curtains. How he fussed with scarves and hats and talked about the wind, keeping her out of the wind. But she wanted her bones to chill, her face to sting, her eyes to fill like saline pools.

She was alone, trapped inside a dying crone. Always asking the time, marking the comings and the goings of the birds, the rise and fall of the tide. Only here did she allow herself to cry. Here on the reserve, among the birds, where she could say it was just the wind in her eyes. 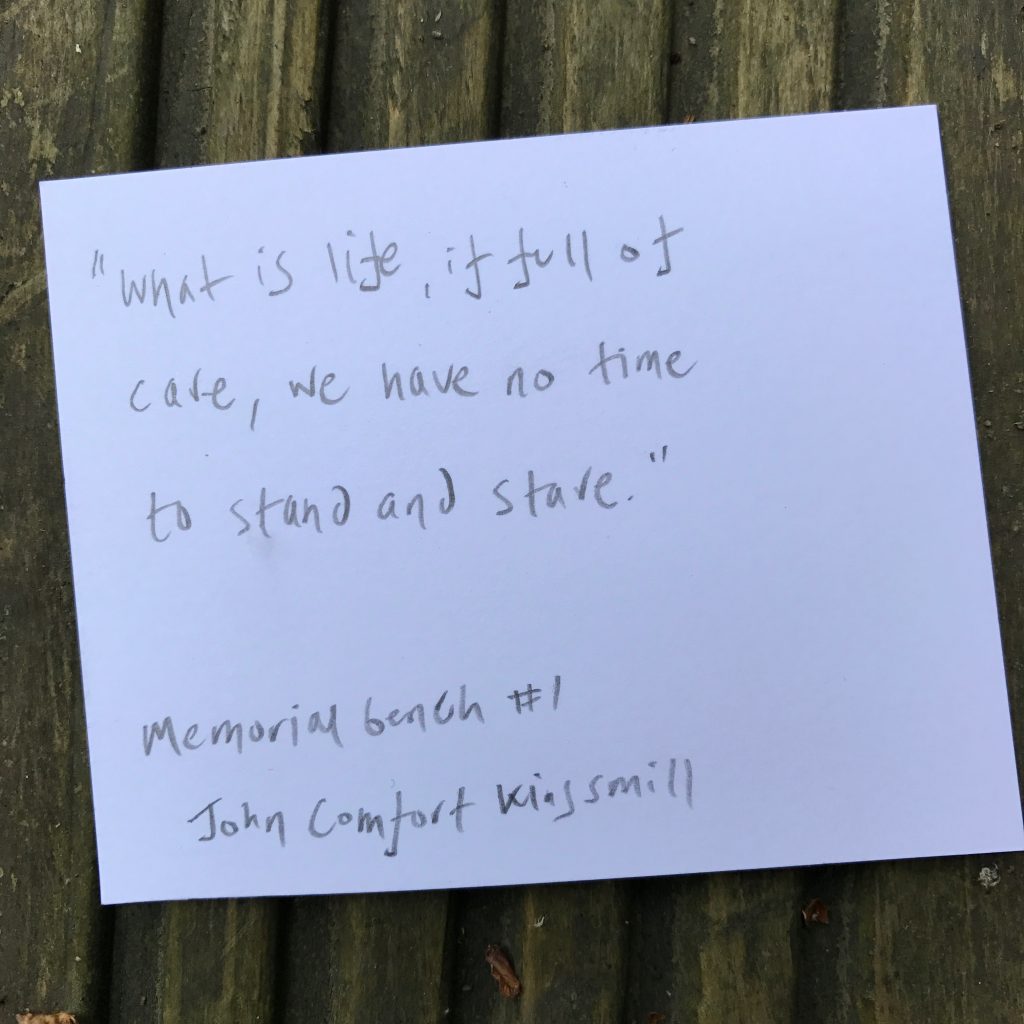 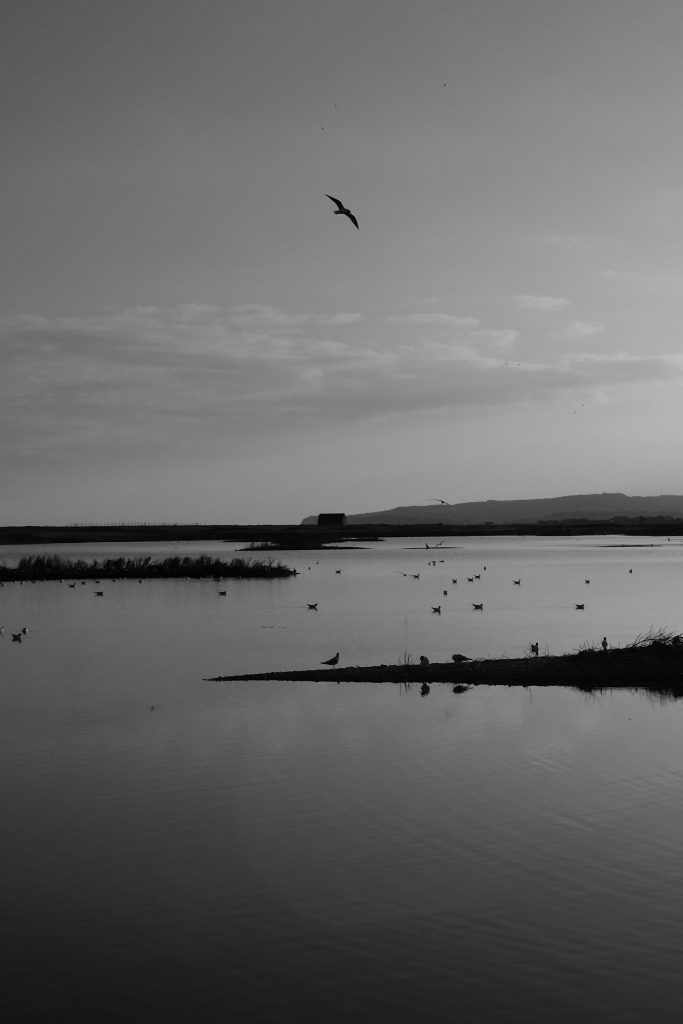 At low tide the groynes reach out to a sea that has slipped too far away. They wait in lines for the tide to turn, for the sea to swim into their embrace. The red channel guides that mark the river-way for returning fishing boats also wait, like upturned shopping baskets on poles. All the way upstream to the wharf at Rye, mud bubbles and wormholes gape at the sudden sky. A paper cup rolls on the floor of the Ray Parkes hide. Through the observation window, a shingle spit on the quarry pit. Birds sit. White heads, grey wings. Waves lap, wind whips the chipboard scout-hut hide. The saline pools are empty lungs, waiting to gasp.

Her blue beret, the red scarf; every few minutes he would stop the wheelchair to adjust them, to check she was warm enough. Even in the summer, it could be bitterly cold. Today, the fierce wind was turning her nose red. When her eyes said it was getting too much, they went into the hide.

It was dark inside and smelled like an old man’s cardigan: pipe tobacco, compost. He lifted the wooden shutter, letting in some light and opening the view to the emptying pools where the birds were gathering to discover what the departing sea might reveal.

From her wheelchair, she couldn’t see out of the window. She asked him to describe the scene, listened keenly to what he might say, tilted her head a little. She would have seen Redshanks and Lapwings and Ringed Plovers. All he could see were birds.

She whispers something from her wheelchair and the words hang in the air between them until the door opens and the wind rushes in and the chance is blown away. Outside the wind pushes her back to the car, faster than she wants to go. There in the dark hide with the tide about to turn, he couldn’t name one bird for her. 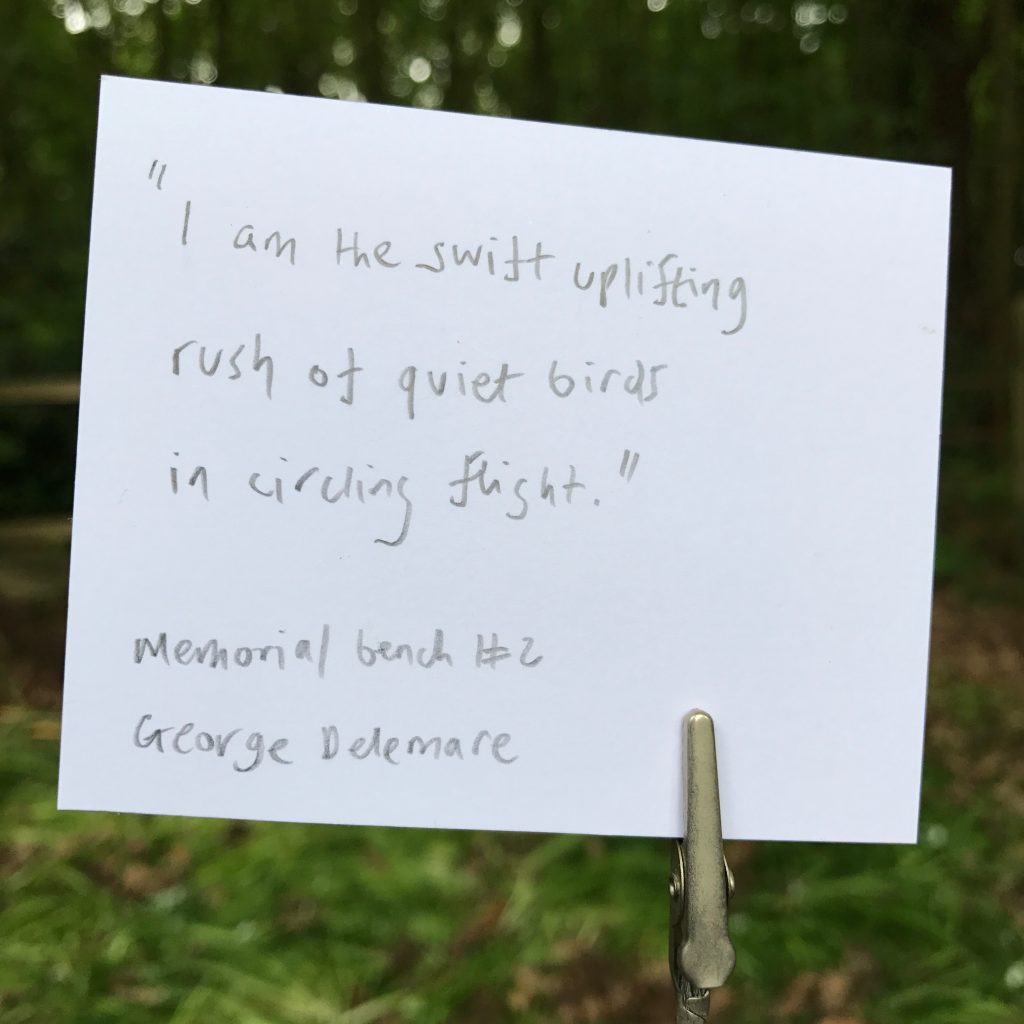 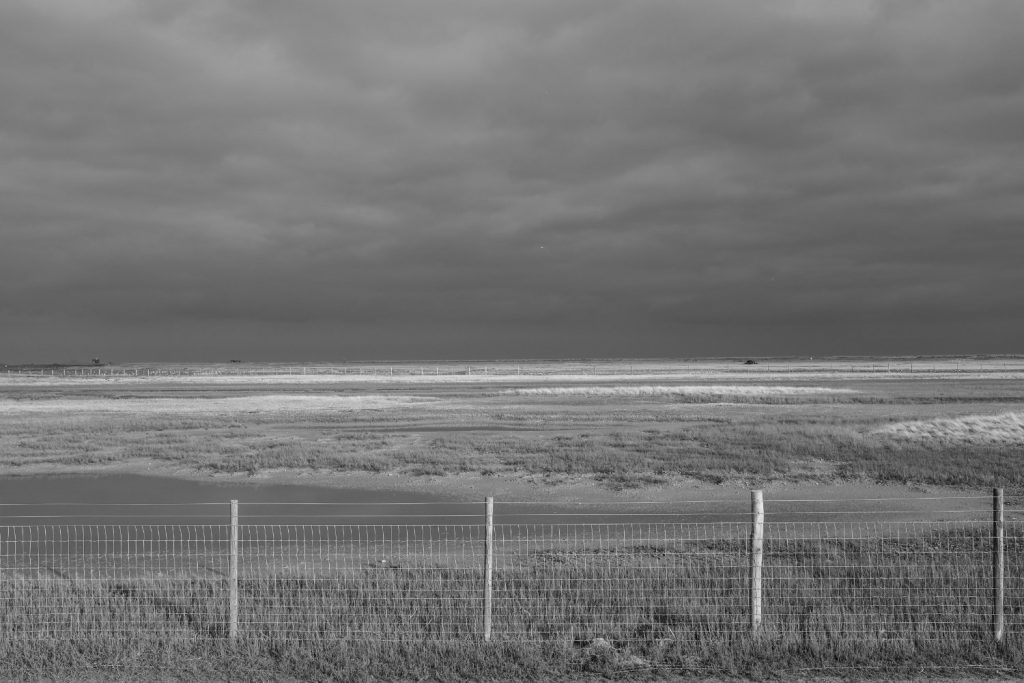 High tide and there is no wind. Its absence is a shock. A sheepdog barks along the river bank. Over Pett Level, towards Fairlight, a gap emerges in the cloud. A sunset is developing. Gulls above the caravans bray like donkeys. The light begins to fall through the parting clouds like water through a sieve. The white wind turbines wait in silent yoga poses. A young girl over the shingle storm ridge in a pink dress throws pebbles at the sky. In the Steve Denny Hide, facing east, there’s barely a ripple on the saline pools. The breeding birds display themselves; The Warbler and White Throat. Others are simply passing through, pausing for breath; The Whimbrel, Godwit, Knot, Dunlin, Sandpiper, Turnstone. On their ways to Arctic nests. The Ray Parkes Hide, facing west. Sun streams through the open window. The air still. On the shingle island, hundreds of birds. Marsh Frogs laugh in the ditches where newts go courting. Over Fairlight and Pett, a cloudbank moves. The evening sun does not have long.

He still came every Sunday. He would bring her old binoculars and field guides and sit in the dark hides, studying the birds. He came to understand why some left and why some stayed. Over time he would know their names.

Now the tide is turning. The river’s mouth is full of sea, the sea is full of river. They meet each other with a kiss. The night prepares itself. The birds grow calm. The sun slips behind a wing of cloud. The Rising Dawn chugs up river towards the town wharf. Mud bubbles again. A radio plays in the Harbour Master’s office. Outside the caravan park cafe, a game of boules draws to an end. The William The Conqueror welcomes well behaved dogs and turns on its lights. 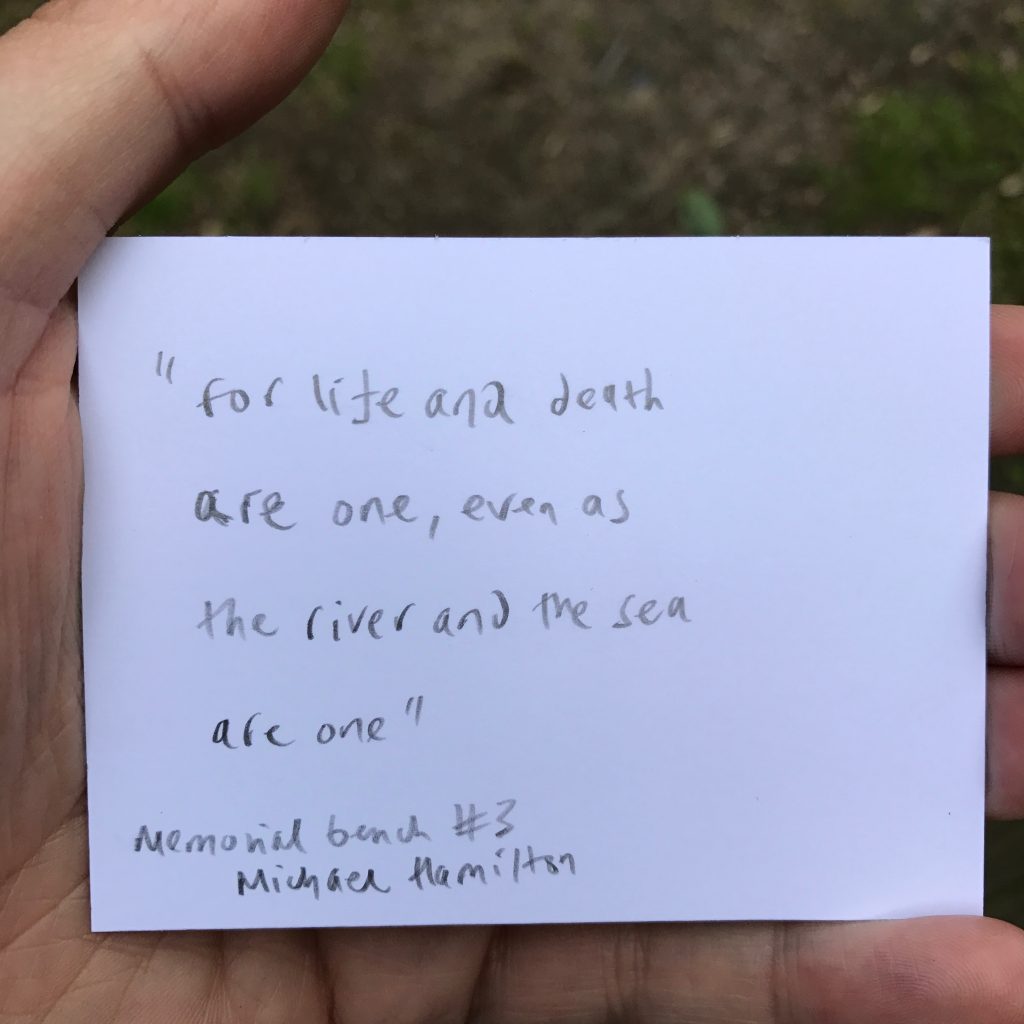