Each day he walked past the cash machine to get to his pitch. It was between Sainsbury’s and Poundland, a good place to sell The Big Issue, right next to the car park lifts, dry and not too draughty. A prime spot for an energetic seller endowed with patience and a thick skin –  qualities he had surprised himself to discover he had in plenty.

People hung around here, a captive clientele perhaps, but one skilled in avoidance tactics. They would stand waiting for the lift, eyes fixed on their over-filled trolleys, carefully missing his gaze. Or they’d be queuing for cash, studying their phones, pretending to be preoccupied. Sometimes, as they folded notes into wallets, they would say: ‘Sorry mate, I haven’t got change’. Occasionally he was brazen: ‘No problem. I can give change.’ But usually he just nodded. It wasn’t simply change they hadn’t got. They were short of love too – he knew that.

Sometimes he had to share his territory with others: buskers, charity collectors or, worst of all, earnest people saving souls or winning votes. The latter were bad for business. People walked past more quickly than usual. Some even took the long way round, sneaking into the supermarket via the alley where the trolleys were stationed. Cowards, he thought.

To most people he was invisible, part of the street furniture, like the cycle racks and rubbish bins. Some paused and bought the magazine. Even after doing this for two years, he couldn’t always predict who would buy. But once he’d caught their eye, they didn’t look away. A few were loyal customers; he was grateful for their small but usually guaranteed contribution to his weekly earnings.

There was one woman who always stopped and asked how he was. Was he still in the same hostel? Had he heard from his family back home? He’d told her once he came from Montenegro. In the old Yugoslavia, he had added helpfully. ‘A beautiful country, I’m sure,’ she’d replied. ‘You must miss it.’ He supposed she was being friendly, but probably it just made her feel better about herself. Customers were free to say whatever they wanted and he had to smile. Beggars can’t be choosers: that’s what one of the guys at the hostel said when anyone complained about anything.  An unhelpful saying, he felt. You could usually choose – up to a point – although some choices were reserved for the lucky.

The cash machine was always busy – except when it was out of order, and then people scowled at him, as if it were his fault. He’d heard that cash was on its way out. That worried him. Perhaps in future Big Issue sellers would get electronic devices to make transactions even easier. Or perhaps everyone would have a chip implanted in them and people would just touch his hand to give him money. He didn’t fancy that. He liked seeing what he was getting.

There was one thing that amused him. Above the machine, it said ‘Free cash withdrawals’. Free? Free cash? English was an ambiguous language. He knew what it really meant of course, but still, what a marvellous notion – an endless supply of free money from a hole in the wall. Sometimes he watched people at the machine, wondering what it was like to exist in that world of instant, magic money. If he was still looking when they turned round, he got accusing glares. Getting cash out of a machine was a very private affair. People felt vulnerable and didn’t like being watched.

Once, early one damp morning when there were few people around, he decided to take a closer look. He walked over, checking that no-one was watching. The screen flashed up different messages every few seconds. One of these reminded him that cash withdrawals were free. There on the right was the place where you put your card and the large gap at the bottom must be where money came out. He fingered the keys on the number pad. They looked well worn – zero, especially: why zero? Next to it were several options: cancel, clear, enter. You could command the machine to do what you wanted. You simply decided how much money you needed and took the notes. It was too easy. No effort at all was required. Some people, he’d noticed, didn’t even bother to check their cash. They just stuffed it in their wallets or bags and hurried away.  Perhaps they were worried about getting robbed. Or maybe they were using a stolen card themselves and wanted to get away as fast as they could.

He heard someone shuffling behind him and moved quickly back to his pitch. He got the magazines out of his bag ready to start work, but could feel them still staring at him as if he’d been helping himself to something that wasn’t his or, worse, as if he were an imposter, someone who used cash machines and couldn’t therefore be authentically homeless. Let them stare, he decided. There was no law against looking at a stupid machine.

During the day, he glanced over at the machine occasionally, but without curiosity or envy. It had stopped raining and he felt just a little bit elated. He smiled more readily than usual. He held people’s gazes more easily. He tried out his English less hesitantly. He was working hard for his money. It didn’t just come for free from a hole in the wall. The coins accumulated and he’d have to go across the road to the post office soon to change them into notes. He didn’t dare to guess how much he’d made, but this felt like his best day for a long time. And it was all genuinely earned. 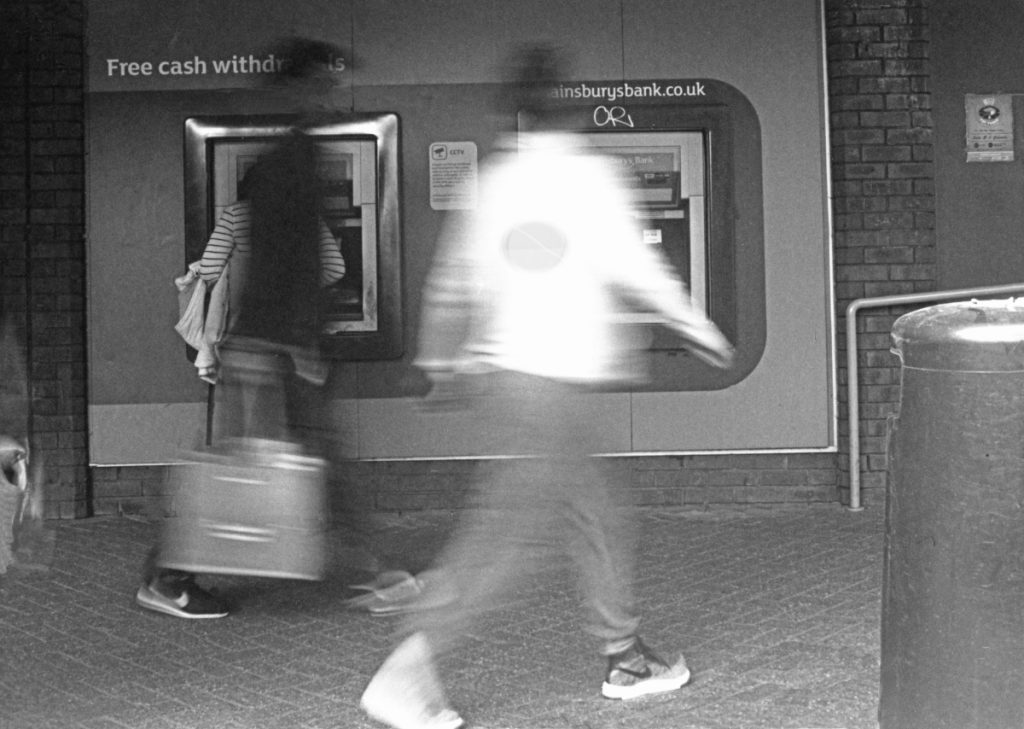