A man walks down Moore Street to surrender. It is April 29th, 1916. In Dublin, a week of insurrection, of rebellion, is over. Padraig Pearse hands over his sword-stick and pistol, his ammunition, and a canteen containing two onions to Brigadier General Lowe. (History! Come quick! Dutifully record this detail: two large onions.) A photographer steps forward, poised to record defeat. By Pearse’s side is a nurse called Elizabeth O’Farrell. She has walked the length and breadth of Dublin for two days bringing notes of surrender to and from various garrisons. Click! The shutter releases and the moment of surrender itself is captured. In the first published versions of the photograph Elizabeth O’Farrell will be deleted and only two spectral well-shod feet will protrude next to Pearse’s. What is Pearse thinking as he gives over his canteen and stands there, hands suddenly empty, Elizabeth quiet beside him? That now the notice of surrender has been posted, he will be arrested and tried for treason? Or that the tide of history will turn, and will carry him high, a hero of the Easter Rising? Because it will: one day long into the future there will be a street named in his honour which will go on to house the treasure trove that is the city library and archives.

Within days, the photograph is reproduced widely, yet Elizabeth’s feet too have disappeared.
Within a week, Pearse is executed.

A woman trapped in a room writes to her mother. We are living in stirring times. I am writing this to be posted if there is any post office left. D’Oyly Carte Opera Company singer Elsie McDermid is in Dublin to perform at the Gaiety Theatre. Instead, from her temporary gaol inside her hotel, she becomes a witness to the Rising. She watches as Saint Stephen’s Green is dug for trenches, as citizens are shot and left for dead – left to die – on the streets. A woman cycles past the hotel, a typewriter balanced on her handlebars, her outfit a home-made simulacrum of a uniform. ‘It’s on,’ the woman calls to whoever she sees; ‘it’s on!’ Elsie watches, with no real understanding of what is happening– how could she have? Even those involved are confused, with orders to rise being countermanded, ignored, reinstated, thwarted… The newspapers will record a different version to that which Elsie watches from her window. Across the Irish Sea, Smashing Up The Irish Rebels is how the spilt blood of Easter Week will reach the breakfasting readers of the Daily Express, and: Notorious Countess Captured and Column of Troops Sent to Retake a Provincial Stronghold. The rebellion ends, Elsie is freed, returns home. Her letter lies quietly for ninety-nine years. It surfaces on the Antiques Roadshow and in time her words return to Dublin, to the library on Pearse Street.

A woman pauses at the shelf marked Fiction G-N. She picks up a book. A novel, set during the fiftieth anniversary of the 1916 Rising. The book makes passing reference to the true story of a British officer who, blithely oblivious to the bitter and bloody siege taking place in the General Post Office on Easter Tuesday 1916, strolled up to the counter and demanded, imperiously, a two-penny stamp. 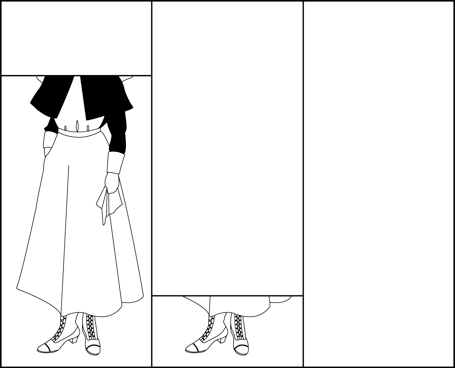