She pauses as she draws back the curtains, blinking in the bright morning sun. The church stares across the street at her, expressionless. On Sundays, she watches the people come and wonders what makes a congregation. So many questions in her mind – half-formed, unordered. What makes a believer? How does faith overcome the obstacles in its path? She does not condemn the faithful and, though she herself sees through the fantasy, she is still fascinated by it. How does a collection of ancient stories produce acceptance so absolute? How does it give rise to such devotion that lives are lost, given – taken, even – in its name? She wonders if it is a lack of something in herself that makes her unable to believe. If she could walk across that threshold with open arms, would everything fall into place? She rolls her eyes. Unthinkable. It will never, could never, happen.

From her vantage point, she considers the human frailty of the parish. She sees the singer, eyes down and dark glasses firmly in place, leaving his mother’s house. He slunk in late last night, his 1993 Mini askew at the kerb. The red paintwork and Union Jack on the roof were designed to boost his rock ‘n’ roll image; these days, the rust spots and tell-tale puddle of oil as he drives away are the things that stand out most. By day the singer takes people from operating theatre to ward; by night he takes them back to the ‘70s. You can’t knock him for perseverance. After church on Sundays, the singer’s child comes for his weekend visit, before he is returned, like a parcel, to his own mother.

She sees the artist, a wisp of a man, shrunken by early dementia, waving off his wife to work. The wife is a judge, whose carefully-planned reducing workload has had to increase again to pay for his care. Encouraged by his nurses to find some time for herself, she joined a rock choir in the next town and now beds the choirmaster after Thursday rehearsals.

She sees the retired gardener wheel his lawnmower down the street to trim the grass of the retired school teacher. In the winter, he mends her fences and paints her windows. The teacher is further into her retirement than him and more needy, which makes him walk a little taller and with a lighter step.

She sees the pasty-faced IT Manager taking his dog around the block, eyes averted to avoid the necessity of small talk with his elderly neighbours. She sees him picking up after the dog, the gardener rushing out as soon as they have turned the corner to hose the pavement down. Later, the gardener will take his coffee onto the pavement, watching the neighbourhood as he holds the end of his life at arm’s length.

He nods – the gardener – to the President of the WI, wheeling her shopping trolley along to the back room of the church, where she will leave the 48 jars of marmalade it contains (24 each of three-fruit and Seville orange with whisky) in readiness for the twice-monthly mini-market. Later, she will chair the committee planning how to mark the 500th anniversary of the Protestant Reformation. The President’s husband was laid off from his middle management job a year ago and rarely leaves the house. Lost as to how to cope with his despair, out of her own she beats him.

And she sees the Minister, not yet fifty, visiting the sick and the lonely – delivering hope like bottles of milk. This morning he has already taken food bank parcels to Western Road and visited a dying parishioner in The Mews. She sees his fatigue in the stoop of his back and the hunch of his shoulders, and tries in vain to muster sympathy. She knows he will stop off later to feed his own hope with a £20 investment in the 2.30 at Newmarket.

The church itself is incongruous, sandwiched between smart, red-brick Victorian villas and facing this row of tiny eighteenth century cottages. Hastily erected in the early 80s, when the council unexpectedly granted a speculative application from church elders, the building is bland and utilitarian. Were it not for the unadorned, square-cornered cross that dominates its front aspect, it would hardly seem a church at all. She wonders who designs religious buildings – is it an architectural specialism? Though there’s nothing special about this one. Not remarkable enough to be ugly, it sits, plain and workmanlike, waiting to be useful, pretending to be purposeful.

The Minister reappears, pulling the side door of the church shut behind him, and crosses the street. She knows that he tucks his betting slips in his inside jacket pocket, but she doesn’t retrieve them, she hasn’t the energy for the conversation that would ensue. She turns from the window and picks up her coat from the back of the chair. Their bodies meet briefly on the threshold, though not their eyes, and she walks away from him down the street. 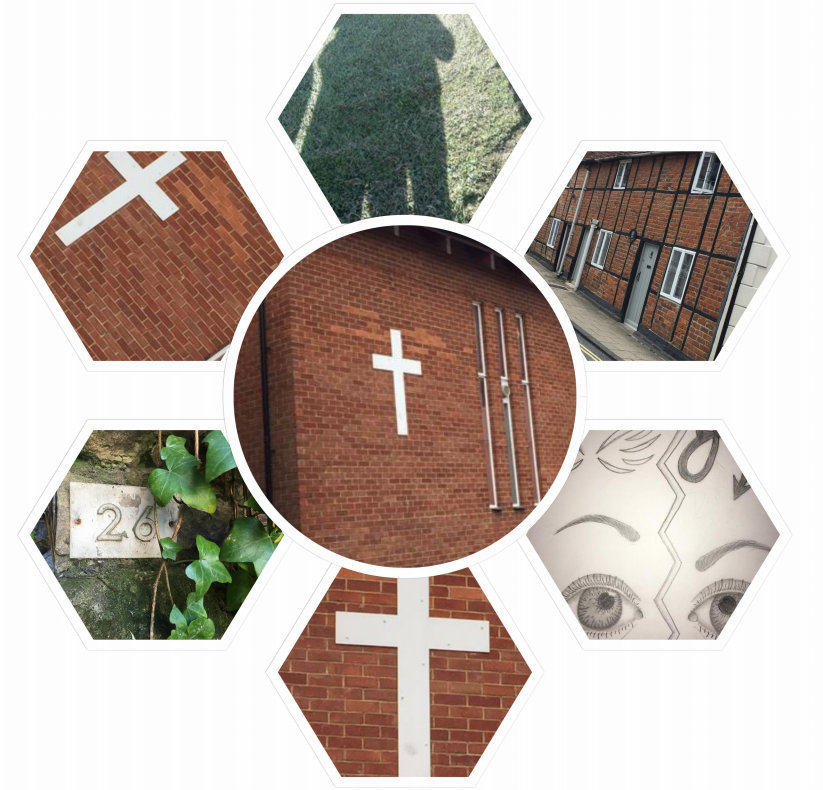