There’s nothing I don’t know about Greenwich Park. It’s my favourite place and we come here every day for a walk. When the wind’s blowing in the right direction I can smell the Park from our front door: the blossoms from the flower garden in spring, the cut grass ready for cricket in summer, the rich mulch from trampled fallen leaves in autumn and, in winter, the steely brittle tang of a frost.

Arabella likes it too, though not as much as me. She thinks I’m obsessed, which is rich coming from her. There are days when I have to natter her to leave the sculptures in the studio and come out for some fresh air. She sees the world in those sculptures. But the world’s not there. It’s in Greenwich Park. Not that my view counts for anything.

Take this morning. She woke and rolled over to face me on the pillow next to hers. “Archie,” she said, “There’s no-one I love more than you.” I was just basking in the glory when she added, “Even if you are as thick as two short planks.”

I didn’t say anything. Arabella doesn’t like being challenged. She decided a long time ago that there’s only one supremely smart person in this relationship. But I was hurt. I slipped out of bed and went down to the kitchen. I comforted myself with thoughts of the xystus in Greenwich Park – of which she hasn’t a clue and I shan’t tell her.

Actually there are several xysti in the Park. (Note the nominative plural. Not so thick now, am I?) But the best xystus is the main one. It runs from Blackheath Gate to the General Wolfe statue. Beyond is a superlative view over Greenwich to Docklands, the City and, on the horizon, the dusty green of Hampstead Heath.

It was on this xystus that I first learned about them. Arabella, caught short, had nipped to the loo. While I waited I heard a young woman describing to her male friend the xystus that lay before them. She pronounced it zikstus and gave the spelling.

Xystus describes a walk lined with trees. This particular xystus is monumental. The mature horse chestnut trees act as a colonnade either side of footpaths which follow the main road – the centre of which acts as the line of symmetry. It’s a broad avenue, designed by a bold hand that knew how to use landscape architecture to express status and gravitas.

I’ve seen the world and her wife on this xystus: locals walking to work, tourists from every nation heading for the sites in Greenwich, roller-skaters, young parents with babies and toddlers, infatuated lovers, older people out for a saunter, dog-walkers and, once, a Chinese man doing Tai Chi. Oh, and squirrels.

Then there’s the runners. I’m a bit of a runner myself. I’ve got the body of Mo Farah: lean, long limbs, not an ounce of fat. Though short distance is more my thing. I’m a Usain Bolt kind of sprinter. In fact I like to think of myself as the Mo Bolt-Usain Farah of Greenwich Park.

The smaller xysti, the ones that lie east to west, near the roundabout, are like running tracks. They’re modest affairs, perhaps 100 metres at most with grass growing down their centres. I’m off like a shot, straight down the middle, the trees transformed into yelling crowds. “Go Archie!” they roar. “Go for gold!”

Sometimes Arabella watches me run and waits patiently for me to come back. Other times she walks on, oblivious. She knows I’ve got this pent up energy, this need to move.

There’s another xystus running on a north-eastern diagonal to the main one, near Blackheath Gate. The centre is paved but cars aren’t allowed. It’s like a long stage with the trees on either side the theatrical flats. Enter left, small child on newly purchased bicycle. Wibble wobble, wibble wobble across the tarmac. Exit right. Followed by a squirrel. Enter right, teenager on skateboard trying to keep his feet glued to its surface while his body is lagging behind, arms flapping. He makes it to exit left.

Arabella’s proud of her sculptures. She does alright. They sell in Pall Mall’s Alan Cristea Gallery. I don’t say anything about them, but they’re horrid. Big, abstract and ugly. Still, she has her collectors and they pay well.

That arty lot think they know so much, but they don’t know there is another meaning to the word xystus. In Ancient Greece, it was a long, covered portico used for athletic contests.

There’s a similar portico outside the National Maritime Museum, on the edge of the Park. I ran down that once, just to see what it felt like to be an Ancient Greek athlete. Pretty good actually, but Arabella was furious: she said I was showing off.

It’s February, late afternoon on a cold, grey day. There’s us and too many squirrels in the Park. We’ve walked down the main xystus and the series of smaller ones are on our left. There’s a squirrel at the end of one of them, searching for the conkers it hid last autumn. One bound and I’m away, a streak of white lightning. The squirrel’s not seen or heard me. Idiot. Not until the last moment and then it’s too late. I grab it by the throat and shake it until its neck snaps.

I amble back to Arabella. She’s pursed her lips, put her gloved hands on her hips. She leans over me. “You wicked whippet.” I drop the squirrel into her hand. She throws it into the long grass. Gone. “That’s number seventy-three.” She’s trying to sound cross but I can hear the pride in her voice.

She clips the lead onto my collar and we head for home. Back down the xystus. 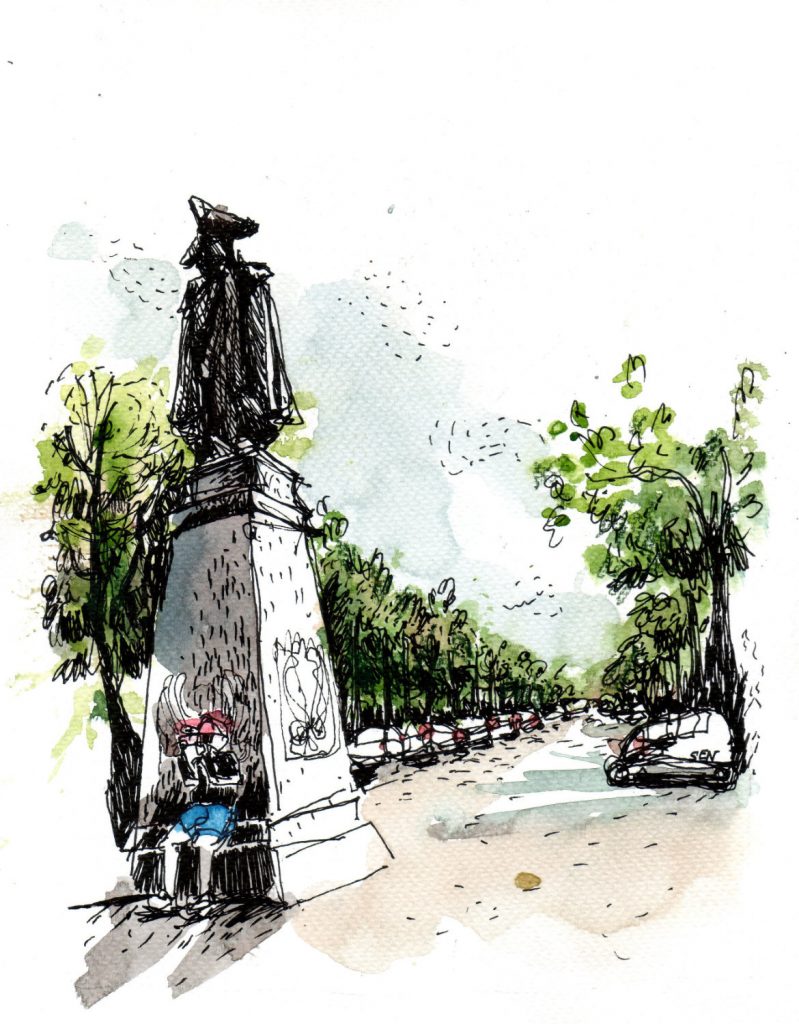 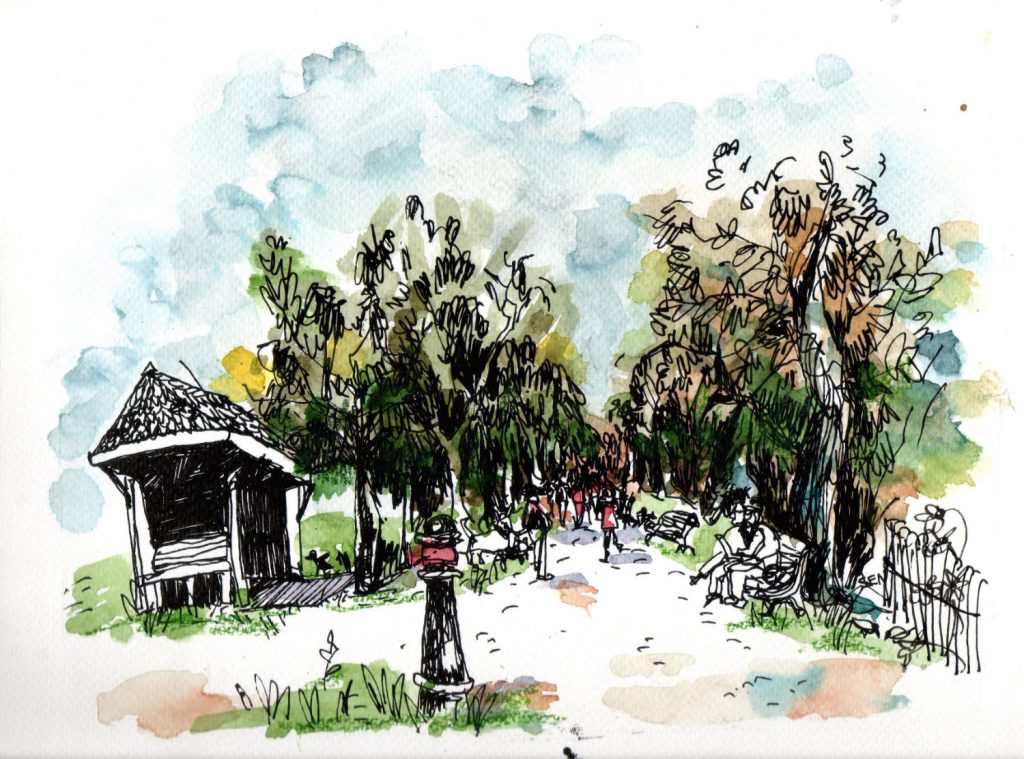 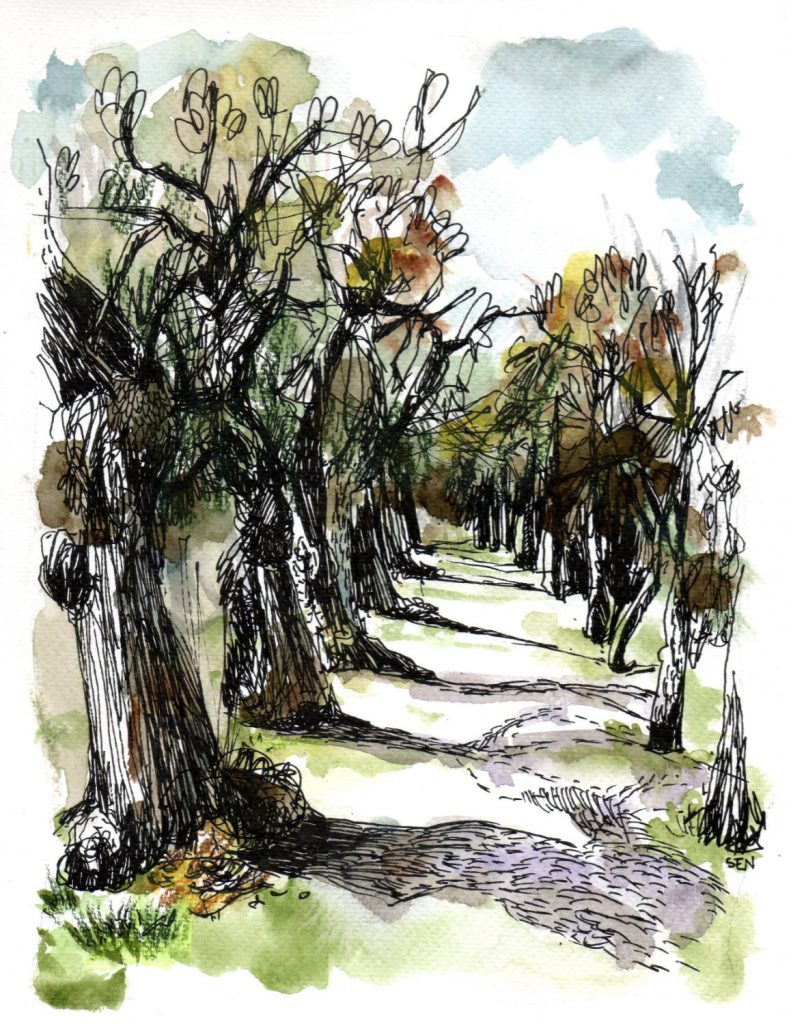