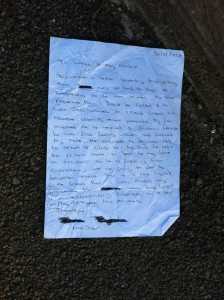 Climbing the stairs in the pleasant low-rise block, Claire began to have misgivings. The flat was on her way home, true, but perhaps it was a bit intrusive. It might look as if she were trying to catch them unawares. Was she?

No time to ponder that, as she was standing in front of their door. No option but to ring the bell.

“I know who you are. He’s seriously ill in hospital.”

The shock of it, and the bald declaration, made her gasp. “Oh no, what’s the matter with him, I mean, why?”

“What I’ve been trying to tell the school all along – he has a serious gastric problem. He was throwing up all night Tuesday, he couldn’t get off the toilet and he kept fainting. I was at my wits’ end.  I told you something was wrong! I called an ambulance at three in the morning and went with him to St Martin’s.”

Despite her shock, Claire was conscious of the woman’s angry words echoing around the stairwell.

“Can I come in?” she ventured.

Wendy Lough’s voice cracked. “I’ve just got back from seeing him. They say he’s comfortable now.”

“Do you mind if I come in? Or is there anything I can do?”

A moment’s hesitation, then Claire was gestured inside. Finding herself almost immediately in a sunny living room, she gazed out of the window at the trees and the town beyond them, wondering if she should wait to be asked to sit down. She decided not.

“How bad is it, Wendy?” she asked gently.

The woman’s face crumpled and she wept suddenly, in deep, hacking sobs she tried to stifle with her hand. “They don’t know. It’s not his appendix. It could be –“ she gulped “– they’re saying it could be a tumour.”

“I’m sorry, I haven’t offered you tea or anything –“

Wendy shuffled off into the tiny kitchen. Claire stood up to follow her, but could see it would be uncomfortably crowded with two. She glanced around the tidy room. Silver-framed photos on a little table. There’s Jordan, aged about five, smiling gappily up at the camera.

She felt she was seeing him for the first time. Whenever she passed his desk, his head was slightly dropped; her image of him was a kaleidoscope of shiny black hair, long eyelashes and chewed nails. Lately he’d acquired a habit of rubbing his forehead with the heel of his hand, as if to wake himself up. A bright, shy boy. Her eyes swelled suddenly, as she realised her affection for him.

“We had a chat last Parent’s Evening, didn’t we?” Wendy called from the kitchen. Perhaps it isn’t that bad, Claire thought. At least she’s calmed down.

“Yes we did, it was good to meet you. Jordan’s a lovely boy, one of our best students. But you know that already,” she said, attempting to put a smile in her voice.  Wendy Lough was nothing if not a hands-on parent. She knew at least as much about Jordan’s grades, progress and homework schedule as Claire herself.

Wendy set down two mugs and settled into the sofa opposite. “Well, I’m on my own. If I don’t put Jordan first, who will? I know the school thinks I’m over-protective” – she sniffed – “but he won’t stick up for himself. And it turns out I was right to be worried, wasn’t I?” Her tone was defiant but her look was pleading.

“Yes, I’m so sorry about that. I got your note, but Jordan seemed well enough to stay at school, and he’s missed so much recently. But you’re right, we should have got in touch with you.”

“Yes, he should have come home straight away! That’s what I asked! He cannot have another accident at school. Diarrhoea’s no joke. It was horrible for him. After that he wanted to go to another school, but we talked about it and I persuaded him to stay at Heathfields, because you’re the best place around here. Now I feel I’ve let him down…” She started crying again, more gently this time.

Claire reached awkwardly across the coffee table for Wendy’s hand. “Of course you haven’t let him down, I’m sure he’ll be all right…”

“Oh, you know that for a fact as well, do you? Do you have kids, Miss Roberts?”

Bullseye, thought Claire, with a bitterness that surprised her. Ed didn’t want babies. And with eight more years than her to think about it, decidedly never would. Neither did she, yet. He still worked at the Solicitors’ firm where they’d met. He was a contented kind of guy, and their relationship a haven from the fraught attachments she’d been used to. She just couldn’t work out if it would be enough.

“No, I don’t. I can’t imagine what it’s like to have a child in hospital. But I am very fond of Jordan, Wendy. And please, call me Claire.”

The two women looked at each other: the rookie teacher and the battle-scarred mother. How did we get here, thought Claire.  She reached for her bag. “Well, I won’t take up any more of your time…“

“Look… sorry if I bit your head off.  I haven’t slept much and I’m stressed out. It is nice of you to come round. Will you stay for another drink? A glass of wine?”

Claire smiled. It couldn’t do any harm. And despite her attempt to recover some professional ground, she had no wish to get on the wrong side of Wendy Louth. “Well, just a tiny one, I’m driving.”

Claire wandered over to the cluster of photos again. Picked up a picture at the back of the table. A pretty young woman with a dark bob, with –

Wendy came back with two glasses. “Ah, you’ve found a picture of me in my prime,” she laughed. ”Before I put on all this weight.”

Claire tried to keep the tremor out of her voice. “Who’s this with you?”

“A guy I used to go out with. Jordan’s father, in fact. We split up, and a few weeks later I found out I was pregnant.”

“Where is he now?” Tell me it’s none of my business.

“No idea. I never told him about Jordan. We weren’t together that long. I just knew I wanted to keep the baby.”

A wave of nausea swept over her.  “Sorry, Wendy, do you mind if I use your bathroom?”

She closed the door and slumped onto the toilet seat, head in hands. Was this really happening? In the midst of trying to make sense of her thoughts, she got up and opened the bathroom cabinet. Behind the neatly stacked boxes of pills, ointments and herbal remedies, she found it.

Syrup of Ipecac. She’d known all along. Without even Googling it, she knew: the once-popular emetic, the bulimic’s friend. Heart-dissolving, gut-eroding ipecac.

She’d never be able to prove anything, of course. A misguided, anxious mother, into alternative medicine, tries to cure her son’s tummy troubles, only to compromise his health irrevocably. That’s her defence. Claire would forever be the childless teacher who falsely accused a single parent of abuse.

And maybe it wasn’t Ed in the picture.

Whatever, both were faits accompli.

She moved the bottle to the front of the medicine cabinet. She stared into her clear grey eyes in the mirror, and went back into the room.

One Response to The runs