Ella does some remembering 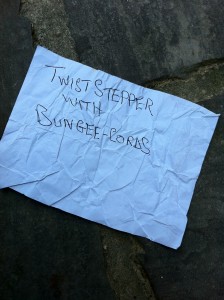 SO A FORTNIGHT ago I walk in and there’s Ella, waving her arms about in the middle of the living room. I don’t notice at first that she’s using some kind of exercise contraption. It just looks like she’s flailing. She’s stepping up and down on two little platforms, while at the same time stretching out two huge black elastic bands with her arms. She is not very coordinated. Our electric fan is balanced on the telly, going full blast into her face. It is wafting her hair out behind her. She looks like she’s fending off an amorous octopus. She has her eyes tightly closed and has a loose, wide smile across her face. I’m about to back into the hall and come in again, this time making enough noise to break her reverie. But Ella opens her eyes.

Oh, Peter, she says. It’s just exactly like it felt when I was seven. I was running across the top of Box Hill. It was autumn. The ground was heavy and I had two kites – mine and Gemma’s – and I was trailing them both behind me. They were quite small kites but the wind was up and they each danced in a different direction and ached my arms all over and oh it was so exhilarating.

I miss the next bit over the whirring of the fan, and when I do start making out what Ella is saying again, she’s reeling off a list of other significant emotional memories that she wants to recreate. As always I say of course Ella. She says it’s called a Twist-Stretcher, by the way.

That night Ella tells me to be gentle, as her calves still ache from all the stepping. I imagine I am an octopus.

We spend most of the next day driving between the various out-of-town DIY stores, trying out the sample doorbells they have on display. This time Ella is looking for a particular sound, one she remembers hearing in a dream a few years back. I find comparing the various ‘ding-dongs’ to be surprisingly absorbing, once I get into it: some have rounded sounds, almost soft and fruity. Others are thin and spiky and unpleasant. I find myself wondering whether the sound of your bell would make a difference to how you thought of the person standing on your doorstep, ringing it. By mid-afternoon we have narrowed it down to three. Ella dashes from one end of the display to another, pressing her head against the fake doors. I try and help by asking what kind of door was it in her dream? Was it a big heavy old panelled door? Was it painted? Was it a plastic ringer, or an old brass one? Ella just looks at me and says oh no, it wasn’t a doorbell. It was a bird. For some reason this makes me angry. I go and sit in the car for a bit.

Ella comes out happy after an hour. She has the right one. She touches my hand as I’m changing gear into reverse and says ‘thank you, Peter’. We drive back via Quiet Lane and I pull in by the old bridge and tell her there’s a few buttons of hers I really need to ring right now.

Then Thursday. I get home to find Ella putting a geranium into the microwave. I hover by the kitchen door. She doesn’t notice me. She turns the dial just a little bit, about the same as to reheat a cup of tea. After about fifteen seconds, the microwave dings. She opens the door and sticks her head inside. There is a muffled sound. Ella is sniffing, loudly and deeply, like she’s trying to clear a cold by inhaling from one of those little menthol sticks.

‘No!’ she shouts, her voice muffled. ‘No, no no!’ She takes her head out and slams the microwave door. The microwave judders. She stabs at the controls, sets them to ‘high’ and twists the knob, this time for about ten minutes. The microwave whirrs away. She is standing with her hands on her hips. Through the crook of her arm, I can see the geranium, rotating slowly behind tinted glass. I cough quietly. Ella turns. She has soil on her face.

It’s a happy feeling she’s after now. She has been talking about a moment when she was around eight or nine years old: she was standing on the back step of her grandparents’ house. There was a metal lean-to veranda. The veranda was full of geraniums. She says the sun was so bright and hot it had practically bleached out all the images – the memory is only a smell and a feeling on her skin. She says the heat came from all directions at once: it filled her ears, went up her sleeves, practically billowed her skirt. She says she’d never felt so happy, so safe, so purely in a moment as on that step, eyes closed, half-suffocated by geraniums.

Behind Ella, the geranium in the microwave gives a soft pop and collapses. I distract her by showing her the assortment of torches I’ve bought at the hardware store. We spend the rest of the evening shining them into her closed eyes from just a centimetre or so away. She says the black one is good as the light is strongest and it also warms her eyelids in just the right way – but it smells too strongly of rubber, which is getting in the way of the scent of the geranium petals we have so carefully stitched into the balaclava. I am frustrated and say we should stop. Ella says the balaclava is starting to itch anyway.

That night I imagine I am the hot fug of geranium heat, breathing over her whole body. I imagine this heat drying the tears I can taste on her cheeks in the dark. Ella asks me if she can take the balaclava off now. I pretend not to hear.

Now this evening. When I got home all the windows were open. The house was dark. I was shouting Ella’s name even before I was in the hallway. There was no answer. I could hear the sound of running water. I ran to the bathroom. The door was shut but not locked. Ella was sitting in the bath. The cold tap was on full but the plug wasn’t in. In the corner of the bathroom was our Hoover. It was all bent and the bag was torn open. Ella was in her underwear. Her skin looked funny. Her eyes were red, rubbed almost to bruises. Her lips were blue. My eyes finally adjusted, and I saw: all over her were stuck little ribbons of Sellotape, each little strip was also thick with the contents of the Hoover bag: clumps of hair; grit; dust. Ella was shivering slightly. And she was smiling:

She holds out the half-used roll of Sellotape, and gestures to where the broken Hoover has spilled its grey salad onto the lino, and to a patch on her belly that is still bare. I grab myself a handful and gently kneel down beside her.

This entry was posted in Uncategorized. Bookmark the permalink.

4 Responses to Ella does some remembering