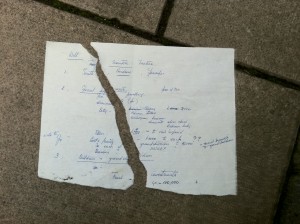 See it all started with Charlotte’s birthday party. Charlotte was his granddaughter. Old John, he took some photos of her unwrapping presents, like you do. He put them on his Facebook. He wanted his sister to see. She was fond of Charlotte but couldn’t get to the party. Her dog had to go to the vet with its bowels. He uploaded the snaps to help her feel part of things, part of the family. It’s funny how these things start.

Now John was a quiet bloke, thoughtful you might say. But he had a few mates, and a few of them were on Facebook. They would have seen the photos. And his work associates. And friends from the bowling and the darts. I guess there would have been quite a few of us, now I think of it.

But I was the one who saw it. Those journalists, they always asked John who it was, but he always said he couldn’t remember, or he just didn’t want to tell. But we knew, me and him. I remember it clear as a bell. I looked at one of those party photos and I added a funny comment, because I’m a bloke with a sense of humour. Sharp like. I remember typing it: “Nice panda”.

John was all confused at first. He didn’t get it. The cuddly toy Charlotte was holding up for the photo was a ring-tailed lemur, not a panda. Anyone could see that. You didn’t need to subscribe to National Geographic. He posted a comment back: It’s a ring-tailed lemur, mate, not a panda. I know, I know, I said. But look in the background, there’s a panda, on the oxygen cylinder.

When he looked closer he could see what I was on about. There it was: Charlotte’s black and white snuggle bear: a panda. We had a laugh and a few other friends did too, but not much of one. It didn’t seem all that funny, or all that important.

Christmas soon came and John took the usual sort of family photos. Boxing Day, they were all on Facebook. He had some nice comments back about how happy they all looked and wasn’t that an awful jumper and hadn’t Charlotte turned a corner at last. And then he added a comment of his own: “Did anyone spot the panda?”

Thing is, just for a joke, he’d taken the panda that I’d seen in Charlotte’s birthday photos and hidden it among the tinsel and junk on the dining table. It’s there if you look hard, he said. He got quite a few messages back now. Some people said oh yeah I can see it and others said this is a wind-up there’s no panda there at all. And then there were all these other people we didn’t know who said tell me, tell me and stuff like that. They thought it was a game of some sort. They liked it.

It kind of snowballed from there. John travelled a lot to see medical people and he always took his camera with him and the panda. He would upload photos with the little bear tucked away somewhere or other. The photos would go online, and people would try to spot the panda. He said it brightened his day, made things easier. And she liked to see where he’d been, him and the panda.

As you’ll know, it wasn’t just family and friends and their friends who liked to play. Spotting the panda became one of those internet crazes you hear about on The One Show. People joined in from all around the world.

It’s true he found it a strain sometimes. There were people who spent so long spotting pandas they got obsessed. They awarded each other points and formed a sort of league. It was very competitive. He said to me once they don’t get it. But they love it, I told him.

And it quickly became more than a game. There were phone apps, merchandising, all sorts. You’d see people, trendy people, walking about with “Where’s the panda?” tee-shirts on. My favourite was this full-sized panda suit you could buy with “Can you see me?” written across the back. Blokes wore them on stag nights. John gave up his job at the garage. He was making good money from that panda. Most of it he spent on Charlotte.

Then we had that exposé in one of the Sundays. They’d found a bunch of idiots somewhere who’d been paying Chinese kids to stay online 24/7, waiting for new photos to go live. They’d spot the panda in seconds and earn a ton of points, they were that good. I know it all upset John. And there was a lot of money involved, gambling on the side. He’d get late night calls from people with dodgy accents offering bundles for a tipoff. He didn’t like that. Some of them got nasty. I had to step in to help run things.

I don’t know when the tide turned against him. I kept saying he needed to mix it up a bit, find a new angle. This panda thing is getting stale, mate, I said. There was competition, using other animals. There was this bloke from Germany doing a funny thing with a plastic shark. The TV said it captured the spirit of what Panda Spotting used to be. We heard Clooney’s people had second thoughts about the movie. I gave John a load of links, but he wouldn’t look. And all those photos of Charlotte in the hospital bed: who wanted to look at that? I said to him again and again: mate, if she’s sitting there holding the bear, it just don’t work.

Towards the end I offered to take over the business side entirely. He spent so much time with her, there was just basic stuff not getting done, golden opportunities missed. I said to him, mate, let me take care of it. I’ll look after things. I’ll see you right. He said okay. On my life he did.

That last day, when they switched her off, he called me from the hospital. He said he was going to the zoo. I told him whatever, you take some time out mate; stay away from the office, stay away as long as you like. I tried to console him. We were mates.

At the inquest, they said a lot of stuff about improved security. They said no-one should be able to climb into an enclosure that easily. They had this panda expert, too. He said they’re docile creatures, normally. But if a male thinks you’re threatening its family, it’ll go mental.

In his backpack, wrapped up with the camera and the bear, they found his final will and testament, written that day. He left me everything. But I’ll tell you the saddest part: he hadn’t bloody signed it. They’re saying it means nothing, it’s just a scrap of paper. But I won’t have it. It’s go to be worth something.