Husband My Foot; Wife My Arse 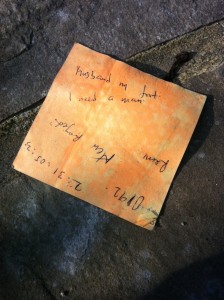 We would catch other people’s cast-offs and take them home with us. Feed them up and make them ours.

The first one I remember was early in our story, our second or third trip out. In a rural Scotmid, a cashier who’d learned English from the locals was having problems with the barcode scanner. Exasperated, he held out my pork pie, saying, “Eet no gaun, lady. Eet just no gaun.”

You squeezed my arm. I had to leave you to pay; had to exit the shop and erupt.

“Eet no gaun, lady. Eet just no gaun” found its way into our codex; from an over-filled dishwasher to bedroom antics.

That had been your habit: appropriating fragments of overheard dialogue. But it became mine, too; taking on behaviours as a means of endorsing you, of saying, I want to be yours. It was a way to offer all of me, and you accepted.

I steeled myself every time I took a layer off, that this might be the time it got too much. I’d been used to showing all that there was of me to someone who decided he didn’t want it – who could handle the discomfort as I covered myself, gathered what was mine and left.

You asked for more.

Life gives no warning of the moments that will change the shape of everything. On a day that was so much like any other up till that point, we met. I immersed myself in the culture of us and you got comfy in the space I cleared for you.

Until one day you didn’t come home. Went, before you could see my hair begin to grey. Robbed me of sex while my tits still stand to attention and the Sunday morning horn still overwhelms. I wasn’t ready to go without. Why should I?

This is how we decided to grow old together:

Me: Will you still shag me when no-one else wants to?

You: It would be my great pleasure. Here. (You held your crooked finger towards me.) Pinkie promise.

A thirty-six year-old Glaswegian bar manager with three-day stubble saying ‘pinkie promise’ is worth a guffaw. You reddened, because you’d said it in earnest. After explaining that you’d paid your way through uni as a summer-camp counsellor with Bunac, in Wisconsin, or was it Wyoming, you sang me to sleep with teen-girl name games:

Me my mo mara

I woke you up with the same. My brain had worked out the rules during sleep.

Me my mo milliam

Is it wrong that I like being the woman you changed for?

Before me, you said, you couldn’t get close to a thing you thought was beautiful. When you’d tried it, all that had happened was that it became less it, and you became less you. Your hand on the Henry Moore in the park spoiled both. Not so with us. Your hand on me brought us both to perfection.

You were the type to seek and search; to plant seeds in life and then not want what sprouted from them. But you kept wanting me.

This is how we decided not to get married:

You: Only three more days till you move in, Lala. It’ll be good, mm? Both of us here. Yeah. And it, well, it doesn’t mean, um, you know, it’s not going to mean, rings.

Noticing I hadn’t burst into tears you carried on, “Not that you don’t need taking in hand, oh Christ, you definitely do. I’ll make an honest woman out of you. Just not, as a… husband.”

Me: Husband? Husband my foot. It’s a man I need. Hear me?

I scored big points for that. It was the first time I’d picked off a bit of someone else’s conversation and kept it tucked away till the right moment. A woman talking on her mobile in the bar, when I was waiting for you to finish a shift. You were pulling a pint. We caught eyes but couldn’t make more of it.

Producing it from my hiding place for our shared pleasure made you roar. You reached for me and pulled me into your laughter. Our mouths ha-ha’d in the other’s ear.

We knew why you’d said what you had; knew why you could claim me but not marry me. We weren’t long back from a weekend at your parents, where your father had done nothing without asking permission. “Is it okay if I pop out for the paper?” “Where shall I sit? Here?” “What do you want me to do, dishes or dog walk?” “Where does this go?”

I don’t know what his punishment would have been for non-compliance, but he wouldn’t have removed himself from his choices if the consequences were minor.

When you realised you were safe on the ringless arrangement, you became cavalier; beefed up the role. Reinforced it, to make sure I knew you weren’t joking; weren’t ever going to be changing your stance.

If I was doing something vaguely DIY, like hanging a picture, you’d say, “What you need is a husband. A husband’d do that sort of thing for you.”

Turning over the soil in the veg patch I’d marked out, you opened the upstairs window and called down, “It’s a husband you need for that.” And I shouted up what you wanted to hear, bending lower over my spade.

You knew what I was saying with those purloined words: “You are all the man I’ll ever need.”

Your posture lifted when I spoke, because you heard the truth in the script. I need a man. And if it was your day-off, if we didn’t have anywhere else to be, I’d add, “Know where I could get me one of those?” And you would show me there was one right there in the room.

It could be shocking to other people. Hearing us speak that way.

“Coffee for you or your wife?” a waiter might ask.

My woman. Like a Spaniard. Mi mujer. I surged as her, because who wants to give up the status of woman to become a wife? Who would want that?

You didn’t need a boss.  Or a spouse who only stays because she made vows.

And here I am… the woman who is staying because she curled her smallest finger around the hook of yours.

And you fucked off. Took up cycling to get fit and a truck driver turning left didn’t see you.

You have ruined films for me. You have taken all the men on screen and made them you. All the skin explored, all the domesticity, is ours. You have turned me into every woman touched and woken. Every woman grieving.

I’m further along than I was. There are bright days. You are the smear on the windscreen that only shows itself in damp weather.

Friends are feeling brave enough because it’s been two years. “Why don’t you get out there? You shouldn’t be on your own forever. Not at your age.”

5 Responses to Husband My Foot; Wife My Arse