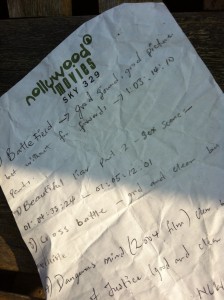 I am writing to you to share my feelings of disappointment, disgust and loathing at your latest film, King of Justice, which I endured on its maiden screening last night. The script was passable. The production was of expected quality. However, there is one decision you made that may well humiliate the African film industry. You know the decision of which I speak. I cannot even begin to understand what you were trying to achieve.

The subject of your film required the utmost in respect. The figure portrayed is a man revered across this continent and across God’s globe. He is good and clean. You showed no respect, no reverence, and you should be punished accordingly.

I wish to never again see your name attached to a Nollywood film.

I write to you to express my interest in acting in your film King of Justice, which promises to be another Nollywood blockbuster.

I have excellent experience within movie studios across Africa, from Lagos to Cape Town. This experience has predominantly been within the maintenance and repair side of the studio. However, I have heard and seen actors perform and liken myself to a young Desmond Dube, but with the gravitas of a young Anayo Modestus Onyekwere.

I am confident that I am right for the King of Justice. It would be my honour to portray my, and my family’s, hero.

The role in King of Justice of which you speak is a cameo and it has already been cast. However, we thank you for your correspondence and wish you well in your future pursuits.

Greetings from the beautiful country of Nigeria in Africa.

African movies are becoming more popular year after year as Nollywood and Afroculture spreads around the world. Recent successes like One God One Nation have led to a surge in new investment. Interest in Nollywood Movies in the United Kingdom, for example, is soaring. It is because of this success and the opportunities it creates that I write to you.

We are soon to release a new movie in the UK on Sky 329 and we are looking for an actor to play a very important role. We wish to ask of your studio whether one of your biggest stars is available. The filming will last no longer than one week.

We would like to send you the full script for King of Justice.

Please confirm receipt of this correspondence and inform our studios whether the opportunity to be the first to cast King of Justice is agreeable with you.

Yours in Greatest Respect

Thank you very much for your kind and quick response. It was my pleasure to write to you. However, I still feel I could be ideal for the part of Nelson Mandela in your latest blockbuster, King of Justice. Please reconsider your casting.

I am available in the coming months to demonstrate my abilities. I hope you will afford me this opportunity.

Yours in Hope and Expectation

Filming has now begun on King of Justice and, as yet, we have not cast an actor to play the most important role. Many leading actors in Nigeria, South Africa, Ghana and Cameroon have auditioned and impressed us. However, we are holding out for our dream actor from Hollywood Studios.

We enclose the full script. Please call when you have read it and we will discuss the terms for your actor.

The matter is fairly urgent.

Please call immediately regarding the casting of King of Justice. The film will be screened on Sky 329 in less than four weeks.

My cell number is [removed]. We must arrange the flight and accommodation now.

Your colleagues at Hollywood Studios have advised that we contact you directly regarding a role they consider a major opportunity for you to enhance your international acting career.

The film is called King of Justice and we would like you to play Nelson Mandela in the final climactic scene. The film covers both his early years as a political activist, his middle years on Robben Island and his later life as President. The final scene focuses on Mr Mandela as President, looking back. We see you as the perfect man for the role.

I admire you and your films.

Subject: Re: We need Freeman!

Regarding your message concerning Mr Freeman. I think it will be a mistake and could offend a lot of people. Not only is he ill-suited to the role but as yet he is not signed for the film.

We are nearly out of time. I would strongly advise you reconsider and recruit a local actor.

I find your lack of response bemusing. Please have the goodness in your heart to speak to me about how I convince you to cast me as Nelson Mandela.

Subject: Re: Re: We need Freeman!

You have the audacity to make these suggestions. You are employed as an editor and as nothing more. Know your place.

Mr Freeman arrives tomorrow and has kindly agreed to film for one day. Then he must return to Hollywood Studios, where he is very busy. I cannot be there to direct as Mr Abassi would like us to celebrate our seventh year of working together. However, Mr Freeman is a professional and I am sure will not require my guidance.

You will receive the film for editing this week. You have the full script. Edit accordingly.

You are right. I should give you the opportunity to take on the role of President Nelson Mandela in my big-budget blockbuster, King of Justice. I should take an enormous chance on you and your history in fixing toilets. I should rebuff Mr Martin Freeman and his keenness, inform him that he is not up to standards and employ you. You are clearly better suited to the role.

See you at auditions. (We have now finished filming.)

Do not write to me again.

Please find enclosed a cut of King of Justice for your viewing. It is as you asked.

I do not have time to review this. I trust that it is in order. Please send out immediately to our colleagues in London for screening next week.

For seven years, I have considered you my first director. First because you are the man who comes first to my mind when I need a director who understands understatement, subtlety, nuance, character, emotion, strength, closeness, distance, love, heart, body, mind, feeling, life, death, culture, engagement, distance. Everything. First because for seven years you have placed yourself in pole position on a grid filled with some of Africa’s – and the world’s – finest directors. First because you have never let me down as a director and you have never let me down as a friend.

So why, dear Lord, why why why did you think it a good idea to celebrate one of the greatest achievements of one of South Africa’s greatest ever leaders, a man who has fought for the rights of black people everywhere, for Africa, a man who lived a life in prison for his political views, for his maverick thinking, for his love of his country, by casting Tim from The Office?

You have turned Nollywood Movies Sky 329 into a joke. You have turned the world’s media against us. We have been accused of a new form of racism. People now spit at me on the streets of Lagos. One man yesterday told me I have ruined his son’s life. His son is four years old.

I have no option but to terminate your contract with Nollywood Movies Sky 329.

Please never return to the studios. You no longer have friends here.

Do you mean Morgan Freeman?