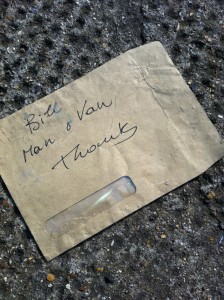 I remember that summer was a time when love became a verb, and not just a noun.

You remember instead how days started overflowing with too many adjectives. Life was upholstered so tightly with beautifuls, and specials, and happily ever afters that you thought you might suffocate.

I remember the joy of throwing off punctuation, of no full stops, or comma breaths, or even brackets to keep us apart.

You remember evenings spent reading an encyclopedia so you could fill yourself up with facts. You even read our car manual from cover to cover once, wanting to understand the mechanics of how a fuel gauge works.

I remember feeling like a heroine in a Barbara Cartland novel. I’d rush home from work to turn the flat into a stage set, standing in the doorway to see how it looked through your eyes. Once I lit a scented candle, arranged roses in a vase, and sat waiting for two hours for you to come home. I had to blow out the candle and relight it three times so that it would stay fresh.

You remember the first time you had to step outside for air. That’s all it was, you kept saying. You needed some plain air. Nothing else. But it was still shocking – to both of us, I think.

I remember how symbolic everything was – the little child who ran up to us in the park, the surprise nine-month extension on our lease when the landlord decided to stay longer in Hong Kong, the angry white swan whose river nest we had to tiptoe past one summer afternoon.

You remember how it rained a lot.

I remember how every detail in every day became stories we could share. Even our dinner parties went on until morning as friends competed with each other to spin out their narratives.

You remember the way I’d keep pouring drinks so no one would leave. You didn’t mind because even that delicate balance between people getting drunk and people being boring was better than the gap they left behind when they went home.

I remember catching your eye sometimes and knowing that even this moment will become a story we’ll tell one day.

You remember the day you first got scared. You may have been uneasy before, but you’d always felt that you could leave when you wanted. Turn over the page and start again.

I remember not seeing the need for a sub-plot, all those irrelevant twists and turns when the answer is there, right in front of everyone’s eyes.

You remember banging your head against the wall as you complained your history was being rewritten in front of you, with even stories of your childhood featuring me now. You said that of course I wasn’t there when the swan the ten-year-old you had been feeding bread to gave chase until you had to climb that tree to escape.

I remember wondering why you always had to be such an unreliable narrator. Surely this was how we both knew to tiptoe past that swan.

You remember fighting the urge to give up, and to let someone, anyone, me, take over your story. You could put your head down then and just listen to what your life had come to.

I remember how it felt to have lost the plot. To have lost control of my characters. To see the words transform themselves as they left my pen and started marching away from the lines I’d set.

You remember exactly the shock of the moment when you first met her. How, at first, it felt as if you’d forgotten how to move on your own. But then one day, you took her to a bookshop and there, in a corner pressed up against the cookery shelves, you read each other so closely that it all made sense.

I remember telling you how this isn’t how it is supposed to go.

You remember showing me how every message can have a different interpretation. Take Bill Man and Van Thanks, you said.

I remember that there was only one way to understand this, that the Man and the Van were owed some thanks. Instead of money, I said. Because gratitude and love are the only things that matter.

You remember reaching across me and putting the punctuation in. Bill, Man and Van. Thanks.

I remember that even as I crossed that first imperative comma out, I knew it was too late. Bill was on his way.

You remember filling the van right to the roof with your things, leaving nothing behind.

I remember knowing, even as I watched the van indicate and pull away from me, that you were wrong about that. Even the slightest narrative leaves a trail.

You remember winding the window down and taking deep gulps. You were already deep into your new story, but somehow the air didn’t taste as fresh as you’d hoped it would.

I remember imagining how your new love would throw open the door to your new home. It’s beautiful, I knew she’d say, and special. Here’s where we can live happily ever after.

We both remember. That’s three words only, like Man and Van, but together, it’s a life sentence.

2 Responses to What’s Left Behind