With Serge, To Angle 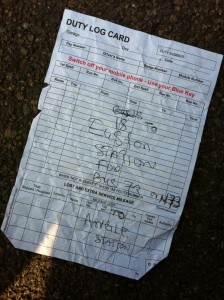 Come on, Serge, think! Didn’t Paolozzi also do some designs on the platforms somewhere? Serge couldn’t remember. The Paolozzi sculpture outside Euston station was hard to miss, being so big and metallic and lumpy, like a mound of abruptly melted silver coins. As Serge and Hazel boarded the eastbound 18 bus at Baker Street, he longed to impress her with his knowledge of modern art, but in fact he had no knowledge of modern art. Serge only knew about the Paolozzi piece because a friend of his claimed it had magical powers, and always touched it in a particular way when passing, depending on which direction he was headed. Nonsense, certainly, yet Serge could see why someone might imagine it to be so.

It was hardly the first time he’d tried to impress Hazel, but this felt special. The whole treasure hunt was a silly idea, one of Mick’s attempts at ‘team building’. Hazel had already heard that the clues eventually led to a jazz club in Stoke Newington where there’d be food and drink and music and, with any luck, no cheesy speeches by the boss. So it was all a feeble sham. But Serge’s attention was gained when Mick announced they’d be doing the challenge in pairs, and gripped when Mick mentioned that Serge and Hazel would be a pair. He suspected Mick of mixing it, of knowing that Hazel would most likely be indifferent to the prospect of a couple of hours in his company. Mick always called him ‘Surge’ and made numerous bad puns, rather than allowing him to be ‘Sairzh’ as he should be and, indeed, always was when Hazel addressed him. For her part, Hazel seemed pleased to be Serge’s partner for the treasure hunt.

As the 18 rolled along Euston Road and a thin September rain stained the broad windows on the top deck, Serge held on tightly to the tatty bus driver’s log card which they had won from the preceding treasure hunt location, where it had been sellotaped to the back of the apron worn by the man making sandwiches at the café next to the Planetarium. Serge had bought Hazel a pretzel and a coffee but nothing for himself, preferring the vicarious pleasure of watching her eat. He glanced again at the log card and re-read the clue: BUS 18 TO EUSTON STATION FOR BUS 73 OR N73. The addition of ‘OR N73’ he took to be Mick’s dig at his treasure-hunting skills, the suggestion being that he would be so slow he’d only get to Euston in time to catch the night bus. But that idea was also a seductive one, if he were to be with Hazel.

Mick had hired Serge some three years earlier to work in the production department at Flower Mountain Publishing, based on two floors of an anonymous block on the North Circular Road. Serge had risen to become database manager, looking after countless customer details. Whereas now they dealt with blogs and Facebook groups and search engines, they used to print glossy directories in which articles by ‘industry leaders’ sat cosily opposite their own companies’ full-page ads. Flower Mountain Publishing had come into existence in the late 1970s, once Mick had quit playing the harmonica in a psychedelic blues band. Hazel, who joined in 1981, was Mick’s longest-serving employee. Now glorying in the title of vice president for sales, she was canny and convincing on every call, often toying with executive assistants before unflinchingly pitching their bosses while using an inventive array of made-up names and histories. Serge would confess, if pressed, to feeling uneasy about the way she acquired a PhD here, or a board position there, if it were needed to seal a deal, and he was positively queasy when she rang a well-known business owner, as she had loudly asserted beforehand, to pitch him for a fling.

He held her empty coffee cup for her as they disembarked a stop early (his mistake) and took her abuse for making them walk in the rain to be good-natured. Soon they were approaching Paolozzi’s Piscator from the Euston Road. Serge paused to consider the possible benefits of following his friend’s superstitious habits. It was ridiculous – after all, this was the same friend who had paid a company to publish his ‘shock exposé’ of the banks and insurance companies where he had worked. It was entitled A Review of Lycanthropy in the Financial Services Sector. Yes, it was ridiculous, yet Serge was willing to do anything that might make Hazel notice him more.

Where was Hazel? She must have gone on, perhaps grumpily or just without noticing that Serge had stopped. OK then, what was it again? East first, if going north… or was it south? It didn’t matter, of course, Serge knew that, but something about the shape of the plinth struck him as odd, just as he made two touches on the cold metal façade, before stepping to the other side.

He looked around dizzily for a moment, as if he’d lost his bearings. Wasn’t that Sharon, head of accounts at Flower Mountain Publishing, up ahead, at the top of the stairs leading down to the 73 bus stop? It looked like her. She seemed to be beckoning, so Serge, aware that Hazel was nowhere to be seen, walked quickly towards her. But Sharon must have ducked down the stairs and disappeared, or boarded the 73. With Hazel, perhaps! Serge broke into a half-hearted jog, only to find no bus at the stand. He stood, nonplussed, suddenly aware of his own pulse and the way the drizzle seemed to form a shield around him, screening out the litter-strewn bus stop and imprisoning him momentarily in his interiority.

When the bus arrived, Serge boarded immediately, grateful to be out of the rain. He inquired if this was the 73 to Stoke Newington, and was surprised when the driver indicated that he should hand over the scrap of duty log which he still clutched. He did so. Producing a pen, the driver added a few more words, just below the lost and extra service mileage line, before handing the card back to Serge. He wrote TO ANGLE STATION, apparently in the same hand that had written the instructions BUS 18 TO EUSTON STATION FOR BUS 73 OR N73. And yet the driver was not, as far as Serge could tell, Mick, or any other employee of Flower Mountain Publishing. The bus doors closed and the driver’s attention turned to the road. Serge looked around. Nobody was sitting downstairs. He thanked the driver and climbed, swaying, up the stairs. Plenty of room on top too. Just me then, he thought. He slumped into the front seat with a mixture of regret and relief. As the bus bumped and trundled, he was soon asleep.

Suddenly aware of sunshine, Serge shifted uncomfortably and wiped drool from the corner of his mouth. He felt himself redden, only to recall that he was no longer with Hazel. Or anyone else, he ascertained, squirming round to see empty seats behind him. The sun was of the early morning variety, tentative but warming. Looking out of the window he saw a long, grassy bank and a low castle wall. With a twist of his stomach, he knew he was in Cardiff, and that the bus was stationary. He jumped to the stairs and took them two or three at a go, arriving by the exit doors just as the driver was getting back on with a bacon sandwich and a cup of tea. Silently he nodded to Serge, put down the tea and proceeded to eat.

“Where are we going?” Serge demanded.

“To Angle Station,” said the driver, “as promised.”

“And where is that?”

“Along the road a way, on the Pembrokeshire coast,” came the reply, “over by Chapel Bay.”

“And what is there?”

Serge looked blankly at him.

“The old lifeboat. Your ferry.”

“To take you to the other side.”

The driver finished eating, wiped his hands on his jacket and returned to the wheel.

“To Angle Station,” he cried; and the engine shuddered.

One Response to With Serge, To Angle