Blame Not the Outcast One 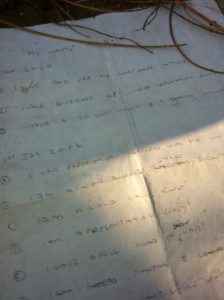 I brought great wealth and glory to my kingdom. Even the lowliest peasants took bounty from my purse. But when a pestilence ravaged the land, my people turned against me. I told them our curse had blown in upon a foreign wind and that it had chilled me also. But they poured their ire upon my head and blamed me for the misery that befell them.

They told me to repent of my greed and they fashioned a crown of paperclips and they stapled it to my scalp. They slashed my robes with scissors and they stripped me of my honour. They said my algorithm was witchcraft and denied knowledge of the glory it had brought them. And when I was dragged from my city to the black friar’s bridge, my acolytes knew me not. And when my person was cast into the water, they called upon the river to cleanse me of my sins, as if they had not sinned also.

But I have resources they cannot imagine. I fought the fetid current and I dragged my body to the muddy bank. I splayed myself under the sun, drenched in the slime of the river, and there I did restore my senses, and there I did hunker down to bide my time. I fished with tin cans and lived off scraps of river waste and the charity of sandpipers. And I waited for the day on which my luck, like the tide, would turn.

Anon came a vassal seeking my crown. He told me that my kingdom had been smashed and ground to dust, that my assets had been sullied and sold, but the storm had passed and it was time to build anew. Those who had once taken it upon themselves to judge me had been judged in turn. A higher authority had cast them unto the winds, as they did deserve. Those who remained had chosen this envoy to seek me out and to beseech my return, so that I might bring glory to them again.

What you say unto me is what I foresaw, I told him. You despoiled me then and now you beg me to come with you? Be gone from here.

Yet he beseeched me further. The journey to this place has been hard and I have suffered greatly, he said. His conveyances had been seized, his palace by the water taken from him also. If you return, he said unto me, we together can restore what never should have been destroyed. I am your true acolyte, your only heir. Let me fulfil the destiny that is mine alone.

I told him that he was a fool. That my crown was a crown of scabby jewels. That the blows I had received had left me scarred and made of me nothing. That my sole liquidity was the slurry of this river and the only bonds I held were owed to the sandpipers. But these lies would not induce him to relent.

If you will not build the kingdom with me, give me your algorithm, so that I may prove my worth, he said. And now I saw his purpose.

What do you know of my algorithm, I said unto him.

They say it gives the initiated a power to direct great fortune, such that it flows like this murky river to enrich whomsoever is chosen, he said. Let me wield it in your name. I will punish those who brought you to this pitiful state and restore your great treasury. And when I am done, your kingdom will be fit for your return.

But why would you do this for me, I enquired?

I do it not only for you but for myself also. For is it not just that I too should secure my portion? See, have I not learned your ways?

And I saw the taint of sickening venality in his eye and I heard the note of righteous entitlement in his voice, and I admired him for it. I will give this to you, I said. I see now that you are my heir indeed.

I unravelled the scarf I wore about my neck and upon which I had inscribed my algorithm. I held it aloft so that he might admire the runes and equations that marked its beauty, but not so close that he might divine their meaning. Take this, I said unto him, it is truly yours.

He gave me his thanks and he reached for the scarf. And when he did touch it with his trembling finger, I took my rod and blinded him. You are a false heir, I said. I will wait here a while more. And I cast him screaming into the oily water, and watched him float away with the current.

I returned to fishing the river scraps with my tin can, prepared to wait for a more suitable supplicant and, on the very next morning, saw one approaching.

So they have sent a bride to tempt me and to tend my wounds, I said unto her. The fools; they know nothing. But I let her approach nonetheless. She wore grey and her hair was tied back from her face. Her heels sank sharply into the mud and she stumbled as she came towards me, like a young thing learning to walk. I offered her not my hand. She stopped when within a stone’s throw.

May I approach you, she beseeched. What do you seek, child, I said unto her. I have come to heal you so that you may return to your kingdom, she said.

And what, pray tell, makes you believe your ministries shall succeed where others have failed?

She moved closer and I readied myself with a stone. Do you not recognise me, father, she asked? I could not but laugh. Father? You are no child of mine. Call me father again and you will feel the cold of this stone on your temple.

Come with me, she said, I will care for you.

You care not for me, I said. It is my crown and my algorithm that you covet.

She said that I was wrong, that we might build a new Albion.

I told her this was foolishness and I cast my stone. She fell to her knees.

She lay in the mud until the sun was low and the river kissed her feet. Then in the sky I saw something to behold. The stars flashed blue and blue again and the muddy banks were bathed in their light. Has a worthy seeker come unto me at last, I called out?

It was then I saw a banner of true knights clad in black. They wore boots of ebony and their suits were studded with silver fastenings. The voices of the invisible host crackled and fizzed in the air about them. I gathered a handful of my sharpest stones and rose to my feet.

Steadfast knights, I said unto them, is it for me that you are come? Approach no further and declare your intent. Seek you my crown? My algorithm.

One of them knelt beside the stricken girl child and placed a hand upon her forehead. He whispered a prayer into his breast and covered with an ashen blanket her body, but not her face.

He commanded me then to go unto him. I asked him his name but he answered me not. Yet I knew he was the one, and so I did walk towards him, a great joy in my heart. Now shall my kingdom be restored, I declared.

8 Responses to Blame Not the Outcast One