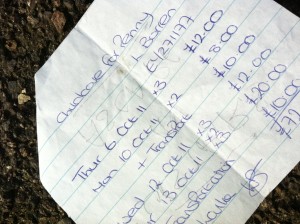 I’m lying on my back in Finsbury Park. There were some people here a minute ago, but they’re gone now. I can’t remember what they wanted.

The sun’ll be up soon. A plane edges between the clouds. I want to flag it down, but my arms and legs feel heavy.

I took a tumble down an escalator once. It was Warren Street Station and, I have to say, a fucking long way down. I clattered into eight or nine steps during my descent, swearing as I hit each one.

Being drunk saved me, the doctor said. A sober man, instinctively stiffening or sticking out a hand to steady himself, might have broken every bone in his body. All I damaged was my dignity.

I take my seat at the bar.

I came in here on the day I moved in. Fed up of unpacking boxes, I snuck out for a lager. Ray told me my drink was on the house. With those words, he imprinted himself – and the pub  – on my heart for life.

On match days, this place is full of football fans. Every other day, the clientele is made up entirely of dogs and alcoholics.

Ray pops my glass, two-thirds full, on the bar to settle.

Just the one, then home for a sandwich and a kip.

My phone rings in my pocket. I flick it onto silent.

The rain is tapping out a beat on the car roof. There’s a gentle slush as we plough through puddles. In the back, a little girl is singing.

Penelope Jane Archer. Lady Penelope. Four years young, and already top dog in every sphere of her life. She catches my eye in the mirror, half smiles and looks away. Even at her age, she’s worked out that she has to ration these moments.

We slept at my mum’s last night. I put Penny to bed in the box room, then headed straight out. I woke up on the sofa at five. Penny was up at seven.

I feel sick. I should have had that round of toast.

“I’ll be with you in one second, Pen,” I say. “Just let me get off this roundabout.”

I take the exit gingerly.

“Nottingham. Now that was a tumble.”

“What happened in Nottingham?” asks Ray, placing another Guinness on the bar. Next to it, a whisky chaser.

“What happened in Nottingham, Raymond, was the greatest piss-up in recorded history.”

It was Matt James’ stag do. We were in the queue for a club. I’d had enough, so I was trying to sneak back to the hotel. Matty was having none of it. He tried to drag me back into the queue. We wrestled for a bit, then I made a run for it. I got about a hundred yards and then went arse over tit on some cobblestones.

“I’m alright, I’m alright,” I kept saying. I’d bitten through my tongue and my bottom lip. Someone put me in a cab, blood pissing from my face.

Matty had to call Laura the next day.

“Adam’s had a little accident,” he said, “But there’s nothing to worry about.”

The rain’s stopped. Penny and I are walking up the drive, hand in hand. My head is really thumping now. I want to lie face down in the front garden.

Penny’s first in, throwing her coat onto the floor.

“Your coat doesn’t live there, Penny.”

“Hang it up for me then,” she says brightly, half way to the TV already.

I can just make out her muffled voice over the hum of the hair dryer.

“I’ll make a cup of tea,” I shout back, heading for the kitchen.

I need some painkillers.

The night Laura and I got engaged, we were hammered. The next morning, we had to check with each other that it had actually happened. We bought the rings in Greenwich that afternoon, afraid that the magic would wear off before our hangovers did.

A voice from the pool table.

I’m in the kitchen, pouring myself two fingers of cooking brandy. I’m hoping it’s going to take the edge off.

Laura appears at the foot of the stairs, pulling on a cardigan. I knock my brandy back, drop the glass in the sink, and then turn to greet her.

“What are you doing, Adam?”

“Looking for the painkillers.”

She opens the cupboard above the microwave and passes me the Ibuprofen.

“Were you out last night?”

“I had a couple down the Stags.”

She knows I’m bullshitting, of course. She used to volunteer in a drop-in centre for smackheads. The nurse told her everyone lies about how much they’ve had. Drug addicts double the amount, drinkers halve it. After she told me that, I started dividing my beer intake by four to be on the safe side.

I open the cutlery drawer. It’s full of tea towels. I want to pull the whole drawer out and fling it at the wall.

“We need to have a chat about money, Adam.”

Oh, Christ. I pull my tea bag out with my fingers and drop it in the bin.

“Jesus, that came round quick. Well, pay her then.”

Lindsay’s the child minder. Her daughter’s in the same class as Penny at school.

“How much?” I ask. I know that I have two £20 notes in my wallet, which I borrowed from my mother before we left.

I’m weaving along Seven Sisters Road, past the unlikely parade of B&Bs that overlooks the park. I’ve just spent half an hour trying to open my front door, without success, so I’m heading back to the pub. I reckon I’ll make last orders if I get a wiggle on.

I fish my phone out of my coat pocket. Five missed calls. One Mum, four Laura.

Time to bite the bullet.

I hit ‘call back’, crossing the road towards the pub. But on the other side, in between me and the Stag’s Head, stands a gang of underfed teenagers. One particularly scrawny specimen breaks away from the group and heads over towards me.

I pocket my phone, turn and start walking back the way I came.

We’ve been over this twice already. Then, Penny’s at the kitchen door, all snot and tears. Laura and I look guiltily at each other.

“Daddy, this juice is stupid!”

“But it tastes funny.”

“Penny, you will have what you are given.”

“I’m sorry for shouting, sweetheart,” I say, crouching down.

I take the cup out of her hands. It did look a bit musty when I poured it out.

I take a sip. There’s a sharp sting at the back of my throat. I think I’m going to throw up.

I’m sat on a bench, surrounded by what’s left of my kebab. I have to talk to Laura but I can’t make my phone work. I’m on the point of taking it to pieces when I hear footsteps.

Shit. It’s Skeletor and his mates. I get up and start walking. But I’m heading away from the park gates. This isn’t good.

I speed up. Their footsteps quicken too.

My heart’s pumping. Then, a cry from behind –

Time to sprint. But my legs tangle up beneath me. Suddenly, I’m face down on the Tarmac. I try to crawl away, but someone’s elbow digs into my neck. There are hands in my coat, in my jeans. I cry out, but it’s like my mouth is filled with cotton wool.

And then, something else. Another feeling. Something warm is spreading out from inside me. My fingers and toes start to tingle and my breathing slows.

“He’s pissed himself,” one of the teenagers says. “That is fucking RANK.”

The kids are backing away now, forming a circle around me. One of them has my phone held up in front of his face. Jesus, he’s filming me. I push myself up onto my elbows, but then slump back down again.

They’re laughing. For a second, I think they’ve finished with me. But then, I hear one of them taking a run up. Something hard and cruel slams into the side of my head.