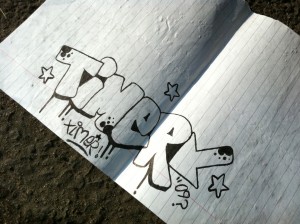 I’ve set up the device. It’s in the kitchen, and when she comes back she’ll have the shock of her life. So I’m out of here, heading for the lake, driving as far away as I can. I want to fish, cook something slow over a simple fire, watch that trout turn pink.  Is this the easy way out?  You could say I was pushed to it. I’d tell anyone that. All that endless waiting, the let-downs, the disappointments.  She was never good with time, drives me mad. It crept up on me. Something endearing in her breathless rush to meet me. Made me feel special. Then our first trip. I was ten minutes early and she was ten minutes late. Too late. So Paris had gone away for us with the tail lights of the train. I ripped up those no-refund tickets and threw them over her like black confetti. Twisted reminder of another anniversary gone bad. if you want to know, what tipped me over the top was last night. Valentine’s. Came in to find iron-shaped scorch marks on two of my best shirts hanging over the chair. Then rooting around in the drawer for another one I found her hidey hole. The stack of overdue bills she’d not got round to paying. No time, she said. She always said. Then the meal. I’d bought her some of those flowers from the garage. The sort, the comedians said, that start wilting soon as you put them in water. Little buds just opening, dying before their prime, all pink and sad and dried up. I looked across at her, at her roots showing. Another hairdresser’s missed appointment. The chipped nails she’d not got round to grooming. What does she do in the evenings, when I’m out by the lake, waiting for the sweet tug on my line ? And then that familiar aroma, something burning in the pan, the disaster looming with the fizz of steam as water hits a burned-out pot. Oh, the sad demise of that fine rump steak, all hissing on that pan, the end sound of a day that always starts with the scrape of charcoal off toast.  In all the years I’ve been with her, six? seven? I’ve never had my steak rare. I miss the cut my mother cooked, perfectly timed. So I get to eat cereal again. Sushi when I’m at work. I stock up on raw food, chow it down on car journeys, keep a stash next to the fishing flies. You see, she never gets it right. She’s got to learn. I’m sitting by the lake now, watching the gentle open flow of the water and the ripples taking one-two-three seconds to reach the bank. I like the way the fly hits the water with barely a sound. I’ve all the time in the world here. I like that I can wait in peace, be patient. Not rushing back this time, she won’t be going anywhere. I’ve made a small fire, don’t know how long I’ll stay. There’s a cabin here. Reminds me of the one the Unabomber had. Saw a photo in an art gallery once. So I’ll cook my little fish and eat it just how I want. The flesh turning opaque, the eyes pearl like. Imagining the device just sitting there, waiting. Sun’s going down. By my watch her car will be entering the drive right now.  She’ll park up. Click, clack, the heels on the concrete. So she goes to put the key in the lock. I look at my second hand. Count down ten seconds more. Clip clop along the wooden hall, then the scuttling of her shoes kicked off, as she opens the door to the kitchen. She’ll see it before she hears anything. What she should have had years ago when she started to make me unhappy. Tick tock, tick tock. Ping. Precise as my old ma’s kitchen timer.