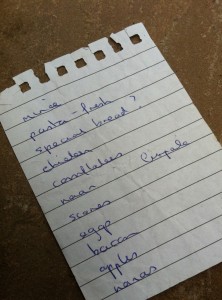 This was the first time she would be visiting his place. The first time he would cook for her. A lot depended on it. He was hoping the last course would be intercourse…

She had long, fake-tanned legs. Her smile revealed near-perfect teeth: shiny-white and, like her legs, chemically enhanced. This would be their fourth date. She was due at eight and he had the whole day to prepare. He started by sorting out his flat and changing his sheets. His double bed was over a year old now, the springs still in perfect working order.

He went out and bought flowers, red ones to get her in the mood. All that was left to do now was to decide what to eat, and then find out how to make it.

He could cook and indeed he did cook, mostly oven-ready meals or toast. Pizza was a favourite as was Chinese take-away. He ordered so frequently they even knew his name. It made him feel special. Wanted. He in turn was investing in the local economy.

He decided on pasta. That looked easy and would impress her. It was Italian, fairly exotic, but not too challenging. He called his mum. She agreed. They settled on Spaghetti Bolognese. He had seen ‘Lady & The Tramp’ as a child, his first film, and imagined them slurping the long worm-like pasta together. Then, realising they had the same strand, kissing messily as their mouths met, his Ragu sauce dribbling slowly down her chin…

He looked up the menu online. Simple. Then went to his local Sainsbury’s to buy the ingredients, so far so good. He should entertain more often. It was fun. Perhaps, after tonight, he would? He decided to push the boat out and buy fresh pasta, not dried.

Bread was in the same aisle. Special bread: Garlic, Ciabatta, Focaccia and Naan. A sudden wave of anxiety swept over him. Everything had gone smoothly until this point. He was flummoxed. It should’ve been a simple decision but he just couldn’t make his mind up.

Firstly, was serving bread the right thing to do? He knew from Jamie Oliver that pasta was a carbohydrate, and bread was too. What if she was on a special diet? Fit sorts often were. Also, what if the two of them felt stuffed and couldn’t find any room for dessert? He didn’t want the evening to peak too soon. He had peaked too soon before, and he didn’t want that to happen again in a hurry.

Then, if he did buy bread, which one to choose? Garlic probably. You knew where you were with garlic. But did you really want to be there?

He stared at the bread. His mum hadn’t mentioned it. His mind went blank. He was a little boy lost. He regretted taking Woodwork instead of Home Economics. They all laughed at the soft lads who opted for cooking; but they all copped off while all he got was ‘D minus’ for a lop-sided shelving unit.

He paced up and down. Bought some wine; at least that was easy, red to go with the flowers. He went back to the special bread – the clock was ticking. Eventually, a kind old lady asked if he needed any help. “No thanks, luv,” he winked, “I’ll get there in the end.” She smiled knowingly and left him to his own devices. He walked one complete circuit of the whole store, then one more to clear his head. He passed the condoms, bought a pack of Performa (‘guaranteed to delay climax’), just in case his old batch had passed their expiry date.

She arrived. Her shiny smile blinded him. He blinked in the bright light. They drank and laughed. It was going well. He suggested they eat in half an hour. He made a quick call. A familiar voice answered, “The usual?” “Yes, but this time make it for two.”