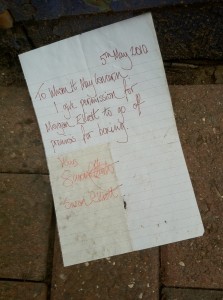 She was peeling potatoes at the sink when she heard his key in the door and turned, startled, towards the clock.

“I knocked off early,” he said.

“Well your tea’s still going to be another…” She turned and saw his large frame filling the kitchen doorway. He was smiling proudly. In his arms was a bundle wrapped in a baby blanket. He held it out towards her.

That was almost three weeks ago. And she’d tried. She really had. But Colin made it impossible. He left ginger hair all over the sofa. He pissed behind the TV and watched her with his big, innocent eyes when she knelt down to scrub the carpet.

“He needs disciplining,” she told him one night. “He hasn’t been brought up right”.

But Bob didn’t understand what it took to keep a house nice. It had taken her years to perfect the colour scheme. And now, of all things, the bloody dog didn’t match the curtains.

They’d bought them with the money from Bob’s title win, back when they were newlyweds. She stood watching as he hung them one Sunday afternoon, hoisting up the thick, rich fabric; he wouldn’t hear of her helping in ‘her condition’. He fixed the matching pelmet carefully in place and diligently screwed in the hooks for the tie-backs. The results were spectacular. They’d been the envy of their neighbours.

Every evening when Bob came home from work, he’d drink a beer, sometimes she’d join him for a sherry, and he’d tell her about his day. But the ritual was different now. Instead of calling her name, he’d shout for Colin and they’d go out, just the two of them, for a walk on the heath to ‘work up an appetite’. It was there he’d met her.

“Valerie’s got a boxer too,” he said, through mouthfuls of toad-in-the-hole.

“The bathroom needs redecorating,” she said, stabbing a pea with her fork.

When they came back from the hospital, all those years ago, she’d drawn the curtains and sat staring at them until it grew dark. Eventually, Bob crept in and patted her hand. “We can try again, love,” he said. “There’ll be other chances”. She nodded slowly and stared at the curtains until the pattern of flowers and leaves became a blur.

The bathroom went untouched. Black mould grew between the tiles. No amount of scouring with a toothbrush could remove it. Night after night, he took Colin walking, returning in high spirits.

Colin chewed the leg on her occasional table.

He left scratch marks in the lino the length of the kitchen floor.

“I said I’d take her boys down the boxing gym…”

He sent a prized figurine careering to the ground where it shattered.

And still, the final straw: the dog did not match the curtains.

He’d never liked Lorenzo’s before. All that rich Italian food gave him heartburn. But he’d sharp changed his mind when Val said it was her favourite. Colin whimpered when he left without him.

“Daddy will be back soon,” Bob said, planting a kiss on his muzzle and a peck on her cheek. And then he was gone.

She plodded into the dining room and poured herself a sherry, the dog close at her heels. She took her drink and sat down to Coronation Street, but couldn’t settle. She rocked. She paced. She chewed her nails. Then she snatched up Colin and left the house.

She was nursing a cup of warm milk at the dining table when she heard his key in the door. She turned, wearily, towards the clock. “You’re home late,” she said.

She turned and saw his large frame filling the doorway. He smelt of garlic and wine. A worried look crossed his face

She sipped her tea and stared at the curtains.