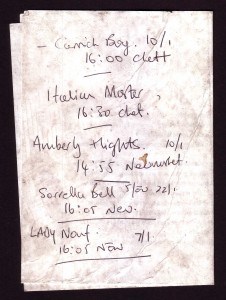 An old man dreams of horses in a morphine-induced sleep.  His granddaughter sits beside him, holding his hand.  He stirs and mutters, “Sorrella Bell, now there’s a horse to watch.”

It’s dark by the time Sam gets home.  She tries to shut the front door quietly, but Dave hears the latch click.

Sam silently curses her bad luck.  She was hoping Dave would be snoring on the sofa in front of the TV by now.  The last thing she wants right now is another argument.  She walks into the living room, taking in the empty beers cans and the remains of a takeaway strewn across the floor at a glance.

“I went to the hospice after work.  They said…” Her voice wavers as she speaks.  “He hasn’t got long now.”

A slip of paper flutters to the floor as Sam pulls her phone out of her pocket, landing near Dave’s feet.

“You dropped something.”  He picks it up before she can retrieve it, unfolding the crumpled paper.  The logo at the top of the page instantly gives it away. “You’ve been wasting money at the bookies again.”

“Did you win?” He doesn’t wait for her reply. “No, you never bloody do.  I don’t know why you bother.”  He heaves himself off the sofa and lurches towards her.

Sam darts out of his way and he stumbles into the coffee table instead.  A glass falls off and shatters.

A piercing wail starts up.  They’ve woken Bethany.  Sam turns her back on the broken glass and the stranger who’s taken the place of the man she used to love.  She drags her tired body up the stairs up to see to her daughter.

Bethany’s room is narrow, hardly more than a cupboard.  Sam picks up the baby and sits down heavily.  “It’s all right, sweetheart.  Mummy’s here now.”  She blinks back tears as she holds her daughter close, knowing that if she starts crying now she won’t be able to stop.  She strokes the downy curls on the top of Bethany’s head, breathing in the comforting scent of her skin.  She’s noticed that Bethany’s features have already started changing; she’s just over a year old now, and the little girl she will soon become is starting to emerge.

“Twinkle, Twinkle, little star.  How I wonder what you are.” Sam sings, her voice low and soothing.  Bethany nuzzles closer to her and her eyelids soon begin to droop.

Later that night Sam lies alone in bed.  She can hear the murmur of the TV downstairs.  As she drifts in and out of sleep she remembers the horses of her childhood.  Their names gallop through her thoughts.  Lady Nouf.  Carrick Bay.  Sir Jim.  She used to spend all her weekends at the stables, mucking out and cleaning tack in exchange for riding lessons.  She’s always associated the smell of horse with happiness.

The next day at work Sam is bleary-eyed after another 5am wake-up call from Bethany.  She’s watching her boss’s mouth moving but the sound coming out is just noise.

“Sam? Are you listening to me?”

Some part of her brain steps in to save her, and she parrots back his instructions.  “Server maintenance, scheduled defrag every night at 10.30pm.  Remove the generic admin account.”

Her boss looks annoyed.  She’s convinced he’s been looking for an excuse to fire her for weeks.  If she didn’t need the money so badly she would have quit weeks ago, but they’ve been struggling ever since Dave got laid off in March.

At 3.30pm, her phone rings.  Her boss glares at her.  Personal calls are frowned upon at work. “It’s the hospice,” she says, as she slips out of the back door, into the car park.

The receptionist looks up as Sam rushes into the building. “He’s been asking for you.”

Her grandfather’s face lights up when he sees her, but the pain is visible in his eyes. “Lovely girl.  You came.”

“Always.”  Sam can hardly believe that the ashen, shrunken man supported by a mountain of pillows and surrounded by tubes and wires is the same man who brought her up.   Arthur Wallace was a man so full of life it bubbled up and out of him.  Now it’s almost all gone, as though someone’s pulled the plug and it’s drained away like used bathwater.

She sits beside him and takes his hand.   His skin is cold and she has to lean closer to hear what he’s saying.  His breath is fetid and faintly almond-scented.

“Sorrella Bell.  She’s the horse you want.  I’ve been watching her for years.”  He grips her hand with a strength that surprises her.  “Sorrella Bell.”  He repeats.  “She’ll do it in the next race.  She’s just been getting into her stride.”  He starts coughing.  Sam offers him a glass of water but he waves it away.

“In the flat… There’s a chest under the bed.”  He presses a small silver key into her hand.

He falls asleep soon after, the horse’s name on his lips.  Sam sits with him for several hours, her hand clasped in his.  He doesn’t wake up again.

She drifts through the next few days in a numb haze, making arrangements for the funeral on auto-pilot.  Every day she checks the newspaper, looking out for Sorrella Bell’s next race.  The day of the funeral, she wakes up early, remembering the chest.

The flat feels strange without her grandfather’s presence – small and dingy.  It’s started to take on a musty smell.  The chest is exactly where he’d said it would be, keeping company with dust balls and spiders under the bed.

Her heart beats faster as she takes the small silver key out of her purse.  The lock opens with a barely audible click.  Memories threaten to overwhelm her as she opens the lid: it’s filled with things she made as a child, things she’d forgotten about until now.  Misshapen clay pots, drawings, birthday cards.  It brings a lump to her throat to think that he’d kept them all these years.  There’s a folder of clippings from his early racing career, a small imitation bronze statue of a horse and a packet of letters tied up with string.  At the bottom of the chest sits a battered shoebox.  She opens it up, and her chest grows tight.  There’s a small fortune in there in bundles of £20 notes.

She flicks through the newspaper she bought that morning until she reaches the race listings. There it is.  Sorrella Bell, 16:05 at Newmarket, 22/1.

The clerk looks at her in surprise as she pushes the money across the counter.  “You’re sure?”

“One last gamble,” she says.

The church is full by the time she gets there with Bethany in the pushchair.  She looks around, wondering if Dave will come as he promised.  There’s a good turnout: her grandfather was well loved.  She spots several former jockeys and racing trainers amongst the people who’ve have come to pay their respects, along with several neighbours and a couple of nurses from the hospice.

It’s almost 4pm by the time the service is over and they start to lower the coffin into the grave.  Dave still hasn’t turned up, but that’s the last thing Sam’s worried about now.  She bought a cheap mini-radio that morning and she’s got one earphone in, listening to the start of the race.

Sorrella Bell is lagging behind.  Sweat breaks out on Sam’s forehead as the alternative future she’d imagined begins to disappear before her eyes.

There had been more than enough money in the shoebox for her to leave Dave, to go somewhere else and start over.

“But this race isn’t over yet.  Tangerine Dream is surging forward, closely followed by Sorrella Bell.  They’re closing the gap now.”

Sam can practically feel the thunder of hooves below her.  Her heart is beating so fast she fears it might jump out of her chest at any moment.

“I’ve never seen anything quite like it!  Sorrella Bell is now neck-and-neck with Prince Frederick III.  As they round the corner towards the finish line this race could go either way.”

She crosses her fingers, unaware she’s holding her breath.

“And it’s a win for outsider Sorrella Bell!  She’s beaten the favourite Prince Frederick III in what has to be one of the most dramatic races I’ve ever witnessed.”

People turn and look at her, but Sam’s so caught up in the moment she barely notices.  A man wearing an elegantly cut suit taps his ear and gives her a knowing look.  His face is familiar, but she can’t remember where she’s met him before.

“Sorrella Bell.  Now there’s a horse to watch.  She’s just getting into her stride.”  Her grandfather’s words echo in her head as she steps forward to throw a rose onto the coffin.

5 Responses to Dreams of Horses