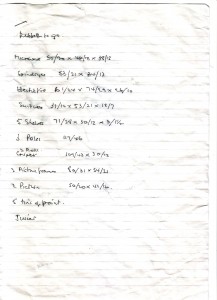 “Every year, it seems, our job as judges gets harder and harder.  This year has shown more than ever what an extraordinary depth of creative talent there resides on this island of ours and we all feel that having to choose but one of these splendid entries is something of an onerous task.  But, of course, that is what we are here to do and, after a great deal of deliberation and debate, and even a few tears (but enough about me),  I am pleased to inform you that, in the end, the panel were unanimous………..”

When it comes to conceptual art, it seems like everyone’s an expert. Sneering, plummy-voiced ageing critics, populist politicians, broadsheet hacks, tabloid hacks, black-cab drivers, white-van men, those who cannot ever visit a modern art exhibition without being  compelled to stage-whisper faux uncertainty over whether the fire extinguisher on the wall is functional or an installation. Worst of all are the interventionists; the dearly deluded who feel that they have something to say and view any original, challenging work as an invitation to them to say it. You know the kind of thing – let’s bounce on that mattress, let’s piss on ‘Piss Christ’.

Art is about making the ordinary extraordinary. The ordinary. That’s my medium. Old household objects. Each and every one of them with a history, a story to tell. They come in, they serve, they bear witness to lives lived. They are invariably taken for granted. Then, without sentiment, when their work is done, or when they are no longer able to do the work they were bought to do, they are discarded. What I do, in a sense, is rescue them. Give them an afterlife, if you like. I bring items that, in the home, might never have been together, together. The hat-stand and the toilet bowl, for example, or the electric fire and the mixer tap. I interweave their individual stories, and create a new one.

I have, I would none-too-humbly submit, now achieved a modicum of success. Enough to be able to employ a couple of assistants to do the heavy lifting after I’ve done the heavy thinking.  I have no time for those who see this as grounds for claiming that I am not the creator of my …creations. My instructions are precise. Nothing is left to chance. Everything must be placed accurately, right down to the last inch – or centimetre, as the younger of the assistants prefers. They are good at their job. They never question, never complain. They are the tools that I use to manipulate the medium I choose to work in. I have complete faith that my latest work – ‘A Terrible Beauty: Non-Recyclables in the Age of Austerity’ – will appear exactly as I had envisaged it, ready for today’s ‘judgement day.’

The competition is stiff this year. In the case of the Clapton Brothers’ latest meisterwork, ‘Phallus Phorest’, literally so. It’s quite a depressingly literal work, as is most of their stuff, in truth. Personally, I believe the title needs to leave the viewer with a little more work to do. I am always disappointed to view an artwork that just does ‘Exactly what it says on the tin’. I’m still not sure whether Cameron Smart’s entry this year, a large tin can adorned with precisely those words, is an examplar or a critique of said style. At least no such uncertainty hangs over David Butler’s ‘The Coming of Man’, where the medium really is the message and tells you pretty much all you need to know about him. As for Patrick O’Fahey’s latest, a portrait of John Lennon etched in donkey manure, the less said the better.  ‘Dung Beatle’ – I ask you! Edith Amin’s digital installation of constantly changing photos of men and women, names and comments, entitled ‘All the people I’ve ever poked’, is only marginally better, and certainly not worth the investment of real time it would take to see the whole boring lot of them scroll by.

No, give me artists that present a challenge any day of the week. Such as Maurice Smith’s ‘How Soon Is Now?’, a clock where the second hand doesn’t move and the minute and hour hands move in opposite directions. Or Aaron Stein’s giant, totally white, canvas, ‘Nothing To See Here.’  Or Lizzie Pascal’s squirrel suspended in a tank of formaldehyde, ‘ Greenwich Park Tourist Attraction No.1.’

I recognise a couple of art critics up ahead, inspecting said tank. In truth, I’d recognise them even were I blind, so predictable, and so loudly expressed, are their comments. The art world would be a better place with these two in formaldehyde. The Physical Impossibility of a Good Review for a Living Artist Existing in the Mind of Someone Dead from the Neck Up. As it would if all their outpourings over the decade that this annual prize has been awarded were publicly set alight, a real ‘Bonfire of the Inanities’. But those projects are for another day. Today is not the day to dwell on the flatulent opinions of those who, though they profess otherwise at tiresome length, couldn’t tell a work of modern art from…….well, from that fire extinguisher over there. Today is not for those who consider ‘rubbishing’ an art form; it is for those who, like me, can turn rubbish into Art.

There is a palpable excitement in the air, now that the judges’ announcement is barely twenty minutes away, and I must admit that even I, old hand that I am, am not above a touch of the old Lepidoptera Viscera as I approach the cluster of people surrounding my exhibit at the far end of the hall. They appear animated and, as I get closer, I am gratified to discern the usual mix of emotions and comments that my work provokes. Indeed, that is all I ask: that my work provokes.

There’s a good helping of laughter, too, which I welcome equally; I am nothing if not unpretentious. Evidently not all of the assembled throng appreciate this, as a respectful hush descends upon my approach being announced by one of my assistants, who wears the expression of someone struggling in vain to disguise some deep inner pain. This alone is no cause for alarm – as I have had to warn anyone meeting him for the first time, he always looks like that.  Seeing that expression mirrored in the face of his junior counterpart, however, is, I cannot deny, more than a little unsettling. What has happened, I wonder. Have they lost something – the juicer perhaps? Spilt one of the tins of paint?

I have my answer soon enough. As the circle of people slowly breaks open to accommodate my entry, I am struck immediately by the fact that I am not struck immediately by ……….anything. Where there should be five tins of paint suspended from a pole reaching out centrally at an angle of 45 degrees from a microwave wreathed in an old picture frame, an electric fire peering out from an old suitcase, an upended spindryer from which spews upward a roll of carpet, atop of which sits a juicer, four shelves arranged ornamentally upon another shelf, another carpet propped, canopy-like above the whole, by two other poles, from which dangle two pictures flanking another picture frame, there is nothing. Nothing, save the faintest of perimeter outlines on the otherwise bare dais.

For once, I am at a loss for words. I can’t tell whether I want to laugh or cry and, afraid that I might do both simultaneously, which I haven’t done since drunkenly slipping back down the steps up to my front door and pissing myself in full view of the cab driver who’d just delivered me there one Christmas Eve, I crouch down to inspect the scrap of paper that I now notice has been taped to the front of the dais. I see that it is the list of component parts that I’d given to my assistants. I see also that an alien hand, mimicking my own handwriting remarkably well, has scrawled, above the list, ‘Rubbish To Go.’

So that’s it. All that work gone – literally – to waste. I stand up, shaking my head and conjuring, with great difficulty, what I hope will be seen as a suitably rueful smile and will help me to suppress the tirade of foul and abusive words that are buzzing around inside my head like angry bees and begging for release. A fellow artist extends a hand and I await his words of commiseration. After all, there are every year stories of a conceptual artist somewhere meeting his or her nemesis in the shape of the over-zealous nightshift gallery cleaner. Then someone else claps me heartily on the back. “Brilliant, Dan”, says a voice. “Your best yet,” chuckles another. Assorted congratulations follow from all sides; I am suddenly hemmed in by well-wishers, all seemingly oblivious to my bemusement.

“……..were unanimous. For his audacious comment on how art is both indispensible yet  essentially disposable, for how in, first, painstakingly assembling a magnificent work of art then, overnight, dismantling and removing it, he has given the imagination of the viewer equal billing with the vision of the artist, trusting them to use just the list of its component parts and the ghost of an outline to recreate it in their mind’s eye, this year’s winner, for ‘Rubbish To Go’, is……………”

3 Responses to The Prize