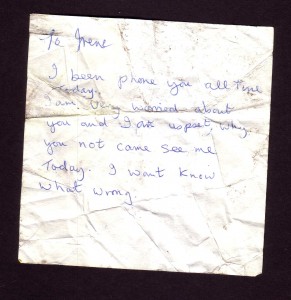 “To Irene I been phone you all .. today. I am very worried about you and I am upset, why you not come see me today. I want know what wrong”

Something back. That’s what I thought would be a good thing to give.

It’s only three hours on a Sunday. Make some coffee. Sit and talk. How hard can that be?

Volunteering at the drop in centre. Some people do church, some do hangovers. For a while at least, I thought this could be a healthy option.

Most of the drop-ins were outcasts from the city’s mental health centres. When the government decided that their bottom line would look better with mental health patients on the streets rather than in wards. They were out of their minds but they weren’t out of sight. These poor sods walked Ponsonby Road endlessly, driven by the voices in their heads.

That’s what the drug would do to them; give them runny legs. They had to keep moving when the sticky golden fluid electrified their veins.

They were like survivors from the war. The first world war. But this was the 1980s.

So, while most of my friends slept off the night before, or just slept in, I unlocked the grimy doors of the drop  in centre next to the Salvation Army.  The worn grey steps doubled, for some, as a bedroom of the minimalist kind. On Sundays its odour was eye watering.

For a few moments I’d think, no one will come, then as if they’d been part of the furniture of the street, they’d appear.

Most of them ‘suffered’, such an understated word, from schizophrenia. In the two day training session for volunteers we learned the profile; one in a hundred, mainly male, the condition often appearing in their 20s, frequently highly intelligent.

Amongst the veterans he was the youngest. He didn’t want to be part of their fold. In his eyes you could see that he yearned for his other self. The treatment blurred his focus. The cigarettes settled the tremors, gave him something else to do with his busy fingers. Along with the instant coffee that looked like fine gravel, with the endless sugars and milk I’d buy in cartons.

Just sit, be with them. All they need is the company. Someone to listen to through the haze.

From the first Sunday I arrived he began to share fragments of his life.

First of all, about how his father and mother are just so very busy travelling about the world, and that they do try to see him when they can and how his mother doesn’t really like the hostel that he’s staying at because it smells of gravy. But he doesn’t mind because seeing him only makes them sad or angry.

Last month he told me about his drawings that the teacher used to give him gold and red stars for and would pin up on the wall in front of all the children but one day after looking at his pictures she was very quiet and her smile was stiff. So he made a pile of his pencils and set fire to them. After that school was not a nice place to be.

She watched from the corner of the kitchen separate, scowling.

Dark, stringy hair that might have been ringlets in childhood.  Hazel eyes checking for shadows, and her skin sallow, yellow like her stained fingers.

I crossed to the window that overlooked the main road.  As a righteous non-smoker I was drawn to the air beyond the pane. I fiddled with the stubborn handle. This was not a window that opened often.

“Careful,” she called out gruffly, “you could get hurt.”

I gave one last shove and it creaked, opening only a few inches past the frame. Enough for a whiff of Sunday morning.

She leaned against the edge of the table; supporting it – it supporting her. I hadn’t realised quite how small she was. Her jeans and dark jacket hung loosely on her meagre frame.

“Ah, this is my seventh Sunday,” I said.

“Well, I thought I could give some time, this is my neighbourhood.”

“Feeling guilty when you see us on your street?”

I flinched and fought the urge to debate her reality.

She finished rolling the flimsy smoke and slid it into the side of her mouth.

“What do you do when you’re not here then?”

I knew we weren’t supposed to share our personal lives with the ‘clients’. But I didn’t want to lie, and I had the feeling that she would know if I did.

“I’m a copywriter. I work in advertising”

“Addverrtiiising,” she stretched the word almost out of shape.

“Mmmm” I nodded as if we were sharing a secret.

She shoved her hands deep into her jacket, seeking a lighter. She spotted Timothy watching us as he circled a spoon around his fourth cup of coffee.

This possibility was no stranger to me. It haunted the place between dozing and dreams and interrupted like an electric shock.  It was the thought that I tried to wash away with the odour of tobacco after each Sunday session.

He glanced at her before hauling his chair opposite mine.

Our composition could have been that of a slightly mismatched couple at any cafe, or a prisoner and their visitor. The wall between us was invisible.

Today he tells me how the doctor explained to him that his mind was like a garden that grows too many weeds and instead he needs to grow chrysanthemums.

He brought me some, the next Sunday, an exhausted pink and possibly abducted from the corner shop.

He fished out of his pocket some papers that he refolded before bowing and presenting them to me.

“I typed it myself.”

I held the crumple of paper like an injured bird and watched him drink his coffee, supping it carefully as if it were pure wisdom.

I knew that I needed to read his note just as soon as he left the centre.

I make myself a cup of the bitter brew and lean against the window ledge, the pages breathing in the autumn light.

Spidery scrawls shaped into long stems cover the first page. On the next, Timothy’s double spaced words tumble upon themselves as they spell out the news that his parents are flying back from Hong Kong next Saturday, and that this will be the perfect time for the two of us to go to their hotel and drink sparkling wine and tell them about the love that we have for each other, that will keep us happy forever and ever.

4 Responses to Coffee on Sunday