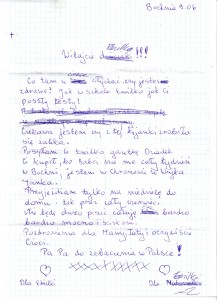 Emilko looked up from his comic. The man opposite was smiling at him. “Is it a good read?” he asked. Emilko nodded and looked down again, quickly.

Then, because the man had a friendly face and it was nice to speak Polish to a stranger, he looked up again. “It’s about a kid and his grandad and the adventures they have,” he said. “My Grandad sent it to me. With a letter.”

“He sounds a nice grandad,” said the man, getting up as the train pulled in to Bounds Green. “See you.”

As the train doors closed and they picked up speed into the tunnel, Emilko thought about his Grandad. He was nice. He often sent him gifts: not big things, not like an iPad or anything, but small, funny things. Like the comic or monster masks, or joke toys, like finger bandages covered with pretend blood.

There’d always be a note, like the one that came yesterday with the comic. Scribbled in a hurry, with crossings out, asking about things they’d talked about on Skype. About tests at school, whether his tadpole had turned into a frog, how Arsenal was getting on. That sort of stuff.

He told great stories too. Emilko actually thought they were better than the ones in the comic, which were obviously written for kids who weren’t yet seven-and-a-half. Whenever they went to Bochnia, his Grandad would tell him stories as he went to sleep, in the backroom of the house where he and Grandma had always lived and where Emilko and his parents stayed when they visited. Fighting to keep awake, he would see Grandad’s rolled-up cigarette glow bright, then almost dark, bright, then almost dark, as he talked. Always sitting by the window to blow the smoke out, so he could say he wasn’t smoking indoors.

Emilko suspected Grandad’s stories were not entirely true but he bundled in enough facts to make you think they might be. So, the morning after he’d told a brilliant tale about his own grandad who, in one shift at the Bochnia mine (the oldest salt mine in Poland, his Grandad said), had not only sculpted a statue in the underground church of St Kinga and lassoed a bolting pit donkey, but had walked the full 4.5 kilometres of the pit tunnel with an injured friend on his back; the very next morning he produced a creased photo of Grandad Salty in a helmet, on a donkey, next to a man with a bandaged arm…

“Your grandma says too much salt’s bad for you,” Grandad had said, as he put the picture away. “Well, salt’s kept our family in work for generations. And even now the Wieliczka and Bochnia mines are closed, they’re still bringing thousands of tourists here every month, to spend money in the shops, hotels and restaurants.” Emilko thought of the tour buses that ferried tourists from Krakow to the Wieliczka mine, which was bigger and more famous than their local, Bochnia one. Some went straight back to the city afterwards, others went on to another place, a place that Grandad never mentioned.

Sometimes, as he walked along the long Underground tunnels, Emilko imagined he was Great Great Grandad Salty working in the mine. He would close his eyes almost completely, so he could see just a sliver of light, thinking what it must have been like 450 metres under the world, with only a candle and a pickaxe. If you got in trouble down there, what would you do? What if you dropped your candle into one of the underground lakes, took a wrong turn, and stumbled down a tunnel no one used anymore? How would you ever find your way out? You wouldn’t get a signal that far down, so you wouldn’t even be able to text for help.

The time he visited Wieliczka mine, with Grandad and Grandma, he had raised this question. Although surrounded down there, even in the churches, by crowds of people, many talking in very loud voices, it was hard to imagine being alone long enough to get lost. But Grandad, of course, had a story. Had Emilko not heard of the poor miner who got lost long, long ago and whose groans and wails could still be heard, 600 years later, rising from the shafts during a full moon and whose tears of anguish, they said, were the source of the underground lakes…?

As Emilko opened his mouth to challenge what was – surely – nonsense, his Grandma stepped in and whisked then off to the underground restaurant, where she had suddenly decided it was time for an early lunch. Later, in the souvenir shop, he heard her scolding Grandad for “sowing nightmares in Emilko’s sensitive little head”. But it didn’t stop Grandad making a low, mournful howl in his ear as they crossed the wooden bridge over the lake. As always, when Grandad mucked about, it didn’t scare him, not really. He knew it was just Grandad, pretending.

“Hey dreamer, time we changed,” said his Mum. Slipping off the seat, his comic rolled up in one hand, he took her left hand with his right. The indicator board said the Victoria train would come in two minutes. Grandma wasn’t what you’d call a laugh. She was nice, kind. Fed him dumplings and chocolate-covered plums, brushed his hair, scrubbed his cheeks after – and sometimes during – meals and always made sure he was warm. But, no, she wasn’t a laugh.

They got on the train. This time there were no seats. Packed between a tall thin man and a small fat woman, he could just about ease out his comic and, if he folded it from top to bottom, manage to read a couple of frames on one side, before turning it over to read the other.

Mum said Grandma was lonely. Grandad had always travelled a lot with his job but, before, there had been the kids, she’d said. Now, she and Dad had come to London with him and, just three months ago, Auntie Alicja had moved here too. Grandma was low, Mum said.

Emilko thought about his Auntie and how, even though they were old, grown-ups pretended. Not about fun things, like being a miner, but about weird stuff. When Auntie spoke to Mum and Dad about her plans, she was one person: she was full of London, of the flat she wanted to find, how she was going to become better at English, so she could move on from the bar and really use her degree, how the old country was for old people. But when she spoke to Grandma on Skype, her words become more slippery. She was a different person.

“Will you be home for good by Christmas?”

…“Well, I’ll definitely be in Poland for Christmas.”

“I hear another of your friends had got married, to a boy from Krakow. Are you keeping up with your old crowd?”

…“Yes, I saw the wedding photos on Facebook. But it’s amazing how many old friends are now over here.”

…“When are you coming back to look for a real job?’

“When are you coming over here to see us, Mum?”

And so on. Not answering questions. Pretending.

It reminded him of once when Mum had asked Dad if he liked a new bright green dress she’d bought. He’d blown out his cheeks, scratched his shoulder and said it was a very vibrant colour.

His Mum saw right through it. He thought Grandma did too. But they pretended they didn’t. Nothing was said. Like Grandad never mentioned the place where the tour buses went, after Wieliczka.