The skin of my back 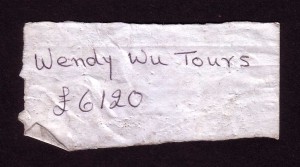 I guess it starts like this for all of us. Brought together in a cardboard box, with maybe 49, 99 or even 499 other identically formed neat paper wrappers – some of us brown, in my case white – we’re all waiting to see what’s going to happen next.

All we know is, we’re going to get stuffed.

How do we know?

Well, you know how stories get passed down. No one doubts them, especially not this particular one. We know that’s what we’re in the world for.

Of course, what we don’t know is how we’re going to get stuffed, or by whom.

Several of us firmly believe it’s our destiny to fulfil some dignified duty in the world of business; that we’ll play some small but significant part in securing a valuable contract or a commercial alliance that will change the fortunes of a global enterprise, bringing wealth and prosperity to all those who work there.

Some of us are particularly keen to help those whose job is to keep their businesses on course in turbulent times, and to ensure the right direction is maintained through those rare periods when world trade becomes as close as it ever gets to harmonious.

Others aspire to grander things.

They’re the ones who hope they might fall into the hands of someone rich or famous – an oligarch or a fêted celebrity – and help create a lasting link between two beautiful people whose gilded lives connect in opulent, scented rooms filled with flowers. They hope to help such people share the love of which they sometimes speak. “Darling, you looked wonderful last night!”

I’ve known others who see themselves as the bearers of diplomatic news. They long to pass through the corridors of power, moving swiftly from hand to hand, dying to have their throats slit by pearl-handled knives.

And there are others, less ambitious, less crazy – but no less worthy – who know they are destined for a less exotic passage.

They’re the ones who expect to carry that quotidian brand of information, which – these days – is so often conveyed by the modern electronic processes that threaten our very existence; messages mailed but never posted.

Humble, they see themselves as the packhorses of our world. The faithful servants who, unquestioningly, do their master’s bidding without demur. The simple workers who remind us that, sadly, much of life is mere drudgery.

There are some, of course, who relish the prospect of getting into trouble.

They’re the ones who end up carrying forged or illegally obtained banknotes of every denomination, or the details of murderous assignations; the blackmail notes and the compromising photographs; the fraudulent identification papers and the lovers’ secret billets-doux.

They have no morals.

And there are yet others who, high-minded and above such scurrilous activities, are of a more pragmatic disposition.

They know that – unless they are lucky – they will have to carry bad news.

They’ll be the ones that inform the luckless that time is running out, that the tests were negative and their surgeon’s prognosis was right; the ones that have to listen while despair fills the air as examination results are learned; that have to hear the rage of drivers who know they were going too fast, but hoped they hadn’t been spotted; the muffled oaths as the realisation dawns that the credit card payment was missed and the interest has stacked up.

Most of us, of course, are resigned to being marked – our pristine exteriors despoiled, some would say – either with characters made with inks of every hue impressed upon us by hands of every age, or by writing machines whose role it is to deposit information on our skin as if it were a surface invented for their exclusive use. No feeling in their caress, only ink to impress some other sort of machine.

Of course, there is the chance that some of us will bear on our backs the marks of genius; the hastily drawn sketches that – in the hands of experts and skilled craftsmen – become the icons of their age, the buildings and bridges that shape cities and join communities.

I embraced and conveyed the scribbled news that love was shared; that, though continents and oceans might have separated two hearts, nothing could stop them beating as one.

I heard the voices of those who, excitedly, discussed the great adventure.

I could imagine the sights they would see, the foods they would eat, the people they would meet, the laughter they would share and the hopes they would carry from the altar of an English church to the shores of the China Seas and beyond.

I knew the joy the journey would bring.

I even knew the initial cost and could guess the profit.

I was a party to the marriage of two minds and the sealing of two fates.

And then, like all my kind, I was torn open, rejected; cast aside with nothing more than a three-word reminder and a sterling figure tattooed on a scrap of my back; discarded, to be trodden underfoot by passing strangers; left to drown in the rain, fearful – even terrified – as the noisy traffic swept by, day by day and night after night.

But I wasn’t surprised.

That’s how the story ends for every envelope.

We’re all stuffed, one way or the other.

2 Responses to The skin of my back