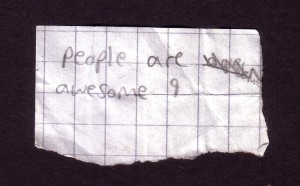 Anyone sitting here, love? Cheers. Didn’t fancy standing all the way to Wimbledon – not in these shoes anyway, soles practically hanging off, look! ‘Scuse me talking, you probably want to read your book.

What is it you’re reading?

Don’t know Tony Morrison – is he good? Not a reader myself, not exactly a brainiac. Debs always said that, if she’d wanted brains, she’d sooner of married Rex here than me, ha! Eh, boy? Debs was always on the ball like that, quick, quick, quick.

My brains was the problem though, because I was bloody stupid. Pardon my French. You think: you’re young, you know it all, like you’re the boss. But when work dries up, and it’s beans on toast every night o’the week, and nappies cost Christ knows what, you realise you had no idea how hard it is, day in, day out.

I remember going to the Ladbrokes on Chapel Market, thinking: ‘I can sort this out.’ That’s what you think to yourself, every time.

Oh – your stop already? Well, it was lovely talking to you anyway. Enjoy the rest of your day, yeah?

Course, mate, have a seat. Where you off to, then?

I’m off to see the wife, actually. Well, we’re kind of separated. But we’re going to sort it out.

It started one morning last week, at Old Street. Everyone buzzing round like blue-arsed flies, like. I’d already seen some of the usuals: a guy who’s always there bang on nine o’clock, immaculate in a three-piece suit. The kids who dress like cartoon characters, off to bed while the rest of the world is waking up.

And then, my favourite: a gorgeous black kid, about six or seven, bit scruffy, always with his mum. I liked him because he always smiled and waved at me, every time he passed. It was like he didn’t realise yet that I was one of those losers you’re supposed to ignore.

Right then Debs phoned me. Said she missed me – missed what it had been like, before – and said how if I went to the doctor she’d help me, and maybe we could sort things out. And I was there, with the biggest, stupidest grin on my face, saying ‘anything, I’ll do anything love’.

When she hung up I was – what’s that word? Elated. I felt like I was full of sunshine. And I just wanted, I dunno. Just wanted to make a good decision. I took off my watch – it was only a cheapo, and the battery had died ages ago, but it was still shiny – and gave it to this kid, a gift, like. And he beamed. Course, his mum came dashing over, dragged him away, threw a few coppers in my coffee cup so as not to look too judgemental, like.

That night, I slept under my ratty old blanket like I was tucked up in the Ritz. You know what I mean?

Debs is one of those special people, though. I always knew she was capable of that, that amazing belief, that forgiveness.

My dad, he always said that people live up to your expectations. Saying that, he didn’t seem surprised when I told him Debs was gone, she’d taken Jack, and I was sleeping rough in Old Street station.

No mate, you go ahead and reply. Nice phone, that, bit fancier than mine, ha!

Anyway, couple of days later, I arranged to meet Debs at McDonalds, in Kings Cross, at six. To talk things over, talk about the future. I’d ‘borrowed’ a new T-shirt from Peacocks that morning, you know what I mean, and washed my hair in the gents. I had butterflies, like it was our first date or something! If I’m honest, part of it was excitement – but there was another part which was nerves. ‘Cause there was this voice in my head, saying: you do always balls it up, though, don’t you?

That’s when Jimmy came along, saying, let’s have a drink. I said, nah, Jimmy, I’ve got to keep it together today. But he said, go on, we was gonna toast my new life – come on, you know you want to, you know you’re going to have one in the end.

And I thought: yeah, just one.

God knows what time it was when I finally called Debs. But she was screaming at me, saying: I called you twenty times, I waited an hour, and nothing… And you’re pissed, I can tell from your voice, you’re pissed. And it was all just this raging whirr until she said: ‘I didn’t expect nothing else from you. You’re the worst dad.’ Swear to god, that was like a wrecking ball. I can’t remember what I said, but I remember feeling like I was going to throw up or pass out or something, and then the line went dead.

Next morning, on that dirty blanket, I felt like my skull was sheet metal, being hammered out of shape. Mouth like the bottom of a hamster’s cage. The usuals whizzing about, three-piece suit, cartoon kids. Jimmy there, snoring, oblivious.

Suddenly I had my hands round his throat, screaming: you effing bastard, Jimmy, do you know what you’ve done? He was too shocked to fight back, eyes popping out of his head. Rex was whimpering, and I was all snot and tears, and there was blood on my knuckles.

The last thing I remember is station guards putting their hands on me, and me kicking and screaming as they dragged me out of Exit 1 and kicked my sorry arse down the City Road.

I always thought my old man was wrong about people living up to your expectations. But that was only because he never lived up to mine.

Maybe mine weren’t really expectations, though. Maybe mine was only hopes.

Anyway, it was yesterday morning. Back on the blanket with Rex. I’d woken up really late, probably around lunchtime, since there seemed no point in waking up at all. No sign of Jimmy this time.

And I looked in the bottom of my coffee cup, see if there was enough for a bacon sandwich, and there it was amongst the coins: my watch. My crappy old watch. Just the same – but this time, the hands were moving. Half past twelve it showed, matching the station clock for the first time in its pathetic life. And next to it, a note, in what looked like a six- or seven-year-old’s writing, that said:

I tell you, I did not expect that.

I stared at that watch for what must have been an age, only looking up to see if the kid and his mum were passing by. But no sign. And I sat there until it went dark, thinking – maybe he’s right, you know? Maybe he’s right.

No, she doesn’t know I’m coming. So, it’s gonna be hard. But that’s life, you know? Ups and downs. And I really believe things are going to be OK. I’m not going to balls it up any more.

Anyway, this is my stop. And look at my watch – I’m half an hour early!

You have a good day, yeah?