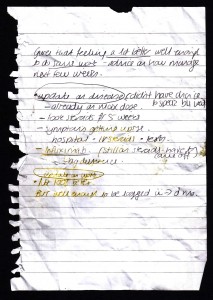 I hadn’t told my wife. Work knew of course.

Well, they had to really; I was hardly there.  I should come clean to her one day. One day.

But the Doctor thought I was getting better so why put her through all the pain? Not after what she’d been through with her Dad. And the fact Toby’s being bullied at school. She didn’t need any more straws on her camel’s back. No way.

Didn’t seem right to tell her about tests, tests and more tests. Yes, there was an outcome after each one. The tumours had responded. Or they hadn’t…those were the main ones. Infliximab seemed to be doing the trick for the problems I already had, but the more serious things on top weren’t good. And there were side effects to that drug. Strange ones. Steroids helped, but they had side effects too.

Trying to keep up with work when in hospital wasn’t ideal. Too many people coming in and out; it was noisy and just down the corridor from the main A&E. But my business needed to keep breathing too, so I had to do it.

The nurses always said I was working too hard. Crohn’s leading to bowel cancer was common. And in a lot of cases of early Crohn’s flare ups were related to stress. But I kept saying, this is more serious than just Crohn’s so it’s not from stress. They just looked at me with disdain. Even Doris; the friendly one.

I was getting cabin fever in my room… (Note to self: I’m mildly claustrophobic) …so I went for a walk. I know it’s somewhat sick, but I sort of, in a dark way, enjoy walking around hospitals. Looking into rooms at people in various states of disrepair. ‘Enjoy’ is probably the wrong word. It was more to do with intrigue. Similar to when you walk around a town at dusk, just before people have drawn their curtains or shut their blinds and you can see into their homes. It’s a morbid fascination. And that word is more apt here I suppose.

Then I hear what sounds like Toby crying. He can’t be here, can he? But then I see him. I have to hide. He’s with Samantha! Bloody hell. I wonder, why isn’t she at work? Toby’s bleeding. Why?

So I hide behind a screen and listen.. Someone’s coming. It’s ok; it’s the nurse. I just pretend I’ve lost my pen.

“Pen? You working again Richard? You should be relaxing. Your kind of treatment takes a lot out of you. And you shouldn’t be down here. You’re staying overnight this time aren’t you?” She says, more telling me than asking. She’s a big lady and she’s lovely. She looks at me longer than she should.

“What’s wrong with the kid then, Doris?”

“Oh…he got hit at school – with a cricket ball apparently. Pretty bad. But he’ll live. You walking back with me?”

Really? Mmmmn. I bloody know where that ball came from. Carl Smithson, the little shit.

The Infliximab doing its worst again. Feeling faint. I get up to see if I can see them. I can, so I scuttle back behind the screen again and listen to Sam consoling him. I sit on a pile of old magazines. (Heidi Klum has a different view of the world for a while.)

I’d love to be able to put my arms around him. Them, even. Nine years of marriage and I love her more than the day I saw her dancing round her (fake) designer handbag to ‘Cigarettes and Alcohol’. But I’m not telling her things have got worse. I’m just not.

From the crack between the curtain and the metal I can see Toby, all stitched up. They’re leaving. That makes me feel faint again.

I watch them go down the corridor, hand in hand. Both leaving a mesmerizing reflection in the spotless hospital floor.

No wonder I’ve got three missed calls from her on my (silent) phone. Poor Tobes. Oh well, she knows I’m busy and thinks I’m staying in a Premier Inn miles away tonight; out with Derek and the new lead in Oxford. Well, I’ve got to get that ‘contract’ haven’t I? And I’ve got to pay the mortgage.

Need to go back and type that email. Could call them… but they frown on that here.

Back in my ‘not very MTV’ crib. Nurse gives me some more tablets. And loosens my tie some more. I lie down. And then sit up to send that email. Then lie down again.

“See you Tuesday Richard,” squeals Doris as she disturbs my nodding off. She’s got a few days off. Visiting her son in Yorkshire.

Samantha looked up at the Doctor. A lone, large tear had made its way to the end of her nose.

The Doctor looked back with an understanding frown and nodded at her to read on.

One Response to Over Time