The curse of the Bell 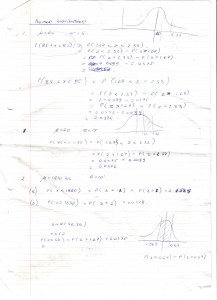 “We’re leaving. There’s no future for us anymore. It’s too late to change what’s happened; it’s time to make a fresh start.”

The words were still ringing in his ears.

Tick. Tick. Tick. Time was running out. The pressure was rising. No matter how he crunched the figures he couldn’t get it to work out the right way. Desperation was beginning to set in.

A bead of sweat fell from his brow onto his notepad. He stared into space as the sweat smudged his calculations. Time and time again he reached the same answer. The wrong answer.

He could feel the bands of panic tighten around his chest. He needed to get a grip. Some air would help. As he stood to leave the room he glanced at the photo on his desk. Picking it up, he rubbed his thumb over the glass, clearing the dust from the smiling faces looking back at him. Sighing, he placed the frame back on the desk. He had to work harder; he couldn’t afford to lose them.

It was dark outside. How long had he been working on this? The pain in his head suggested longer than he’d originally thought. He didn’t have time for this. Rubbing his brow, he turned to make his way back into the building. Headlights picked out his silhouette against the concrete walls. They were here.

“We need to make sure we’re making the right decisions. It’s not like we can go back and undo the past.”
“It has to be right first time?” he’d asked.
“Right; no room for mistakes. Literally.”

It was too much. How could he make these kinds of decisions on his own? Of course he had models to fall back on. But we all know that these situations bear no resemblance to normality. We’re seduced by the simplicity of the curves. The bell tolls and we blindly follow. The consequences could be disastrous.

He sat back down at his desk with a thump. The dim light from his monitor highlighted the lines on his face as he waited for the answer to flash up on screen.  Tick. Tick. Tick. Fail. Again. They would be here any minute; this was his last chance to get this right.

Footsteps ricocheted through the empty building as his fingers tapped furiously on the keyboard. They were here to collect the list. His eyes desperately scanned the screen for her name. It had to be there; surely he’d selected the right parameters this time? Surely he’d be able to save his own family. There had to be a payoff for being the one who’d created the curve. Didn’t there?

He jumped as the door flew open. They were here.

“Is it ready Tompkins? We don’t have much time.”

“It’s ready Colonel. I’ve used the parameters you selected. The country’s top minds, movers and shakers are all here. You’re ready to go.”

“Good, get your coat. We’ll head off now. A helicopter is ready to take us to the launch site.”

The Colonel turned sharply. “What do you mean you’re staying here? You have your orders, just like the rest of us. We’re leaving in two hours, there’s nothing here for us anymore. We’ve wrung this planet dry.” His old mentor paused, anger flushing his cheeks. “You know that by staying here you’re signing your own death warrant. There’ll be nothing left after the evacuation. Even if you do survive, what will you live on? Mini Rolls and microwave popcorn?”

The thick silence was suddenly punctuated by the phone ringing. The Colonel turned and walked towards the door. The irritation in his voice softened, “Good luck Tompkins; you’re gonna need it!”

He ran for the phone, catching it just in time.

“Hi, honey? Is that you?” Her voice washed over him like a warm, soothing wave.

“Is it true, what they’re saying on the news? They say we don’t have long, that the planet is dying. Is it true? Malcolm? Is it true? Is everyone going to die?”

He closed his eyes, searching for a way to break the news to her, to make it better. To tell her that all the years of hard work, lonely nights and broken promises were for nothing. How could he tell her that even after all of her sacrifices he still couldn’t save them?